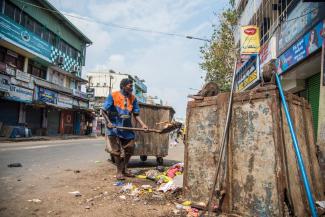 The Madurai Bench of the Madras High Court has rendered an important judgment on 22nd April 2022 (Madurai Corporation vs. The Inspector of Labour, Madurai and Ors), confirming the order of conferment of permanent status on 390 sanitary workers of the Madurai Municipal Corporation under the provisions of the Tamil Nadu Industrial Establishments (Conferment of Permanent Status to Workmen) Act, 1981.

Before getting into the judgment, it is necessary to recognise that the question of the rights of sanitation workers is finally gaining the prominence it deserves, mostly because of the heroic struggles being waged by the sanitation workers, across the country for wages, regularisation and dignity of work, on the streets and in Courts.

Sanitation, in common parlance, is the promotion of hygiene and prevention of disease by maintenance of sanitary conditions by the removal of sewage and garbage and maintenance/cleaning of sewerage systems. For this work, lakhs of workers are employed across the country and this workforce is predominantly Dalit pre-ordained as they are by the caste system to perform these jobs generationally and structurally oppressed and deprived of social dignity, education, proper housing and the fundamental choice of opting for other occupations. This work that secures the health of the residents of the country is caste-based and hereditably tasked to the oppressed Dalit communities, who are invariably denied proper wages, job security, social security benefits, among other things. Babasaheb Ambedkar stated that: “Caste is not just a division of labour, but it is a division of labourers.” Sanitation workers are not merely individual members of this work force out of pure choice; but members, by birth, with inerasable identity and inter-generational continuity. They have been forced into sanitation work by the inexorable evil power of the Indian caste system.

The employment of these workers is not done through regular means and they are mostly daily-wage/guised contract workers. They are not even paid their basic minimum wages. They have no access to drinking water, toilets or urinals. As if these indignations were not sufficient, they also face casteist and classist prejudices and biases from the very people whose health they protect. Further sanitary workers suffer great indignation everyday in their work being forced to handle human faeces with their bare hands, and risk death every single time they enter manholes/sewer lines/soak pits etc. This is state-sanctioned manual scavenging and murder!

Another aspect is that these workers are primarily employed on daily-wage or guised as contract workers. In fact, this is rampant in solid waste management in urban local bodies, where we find that there is no recruitment of permanent workmen, instead workers are employed on daily-wage basis or through sham contracts as safaikaramcharis/sanitary workers with no security of tenure, low wages and no social security benefits. The Governments and the Urban Local bodies have thrown to the winds the repeated cautions of the Supreme Court that the system of contract labour is nothing but an improved form of bonded labour and that it is nothing but a new technique of subterfuge adopted by employers in recent years in order to deny the rights of the workmen under various labour statutes.

In the present case, the order of the competent authority under the Tamil Nadu Industrial Establishments (Conferment of Permanent Status to Workmen) Act, 1981, conferring permanent status on 390 sanitary workers of the Madurai Municipal Corporation was under challenge before the Division Bench of the Madras High Court. The salient aspects of the judgment are summarized below.

2. The High Court also makes an important point that the Act does not make a distinction between a temporary employee appointed regularly or a temporary employee appointed irregularly, since it is a beneficial legislation intended to confer permanent status on workmen who satisfy the requirements of Section 3 of the said Act, in order to avoid continuous exploitation of workmen by employers.

3. Most importantly the High Court has noted that the Municipal Solid Wastes (Management and Handling) Rules, show that every Urban Local Body is placed with the responsibility of collection and disposal of wastes, which cannot be termed as “a temporary phenomenon” and indeed is a continuing work to be carried out by the Corporation. As such the High Court rejected the contention that sanitary workers were employed purely on a temporary basis to carry out the temporary work.

4. Further the High Court also rejected the argument of the State that permanent status cannot be conferred in view of the judgment of the Supreme Court in the Uma Devi case, wherein the Supreme Court decried appointment of a person on temporary basis to regular posts in public employment. The High Court concluded that the decision of the Hon'ble Supreme Court will not put fetters on the applicability of the Tamil Nadu Industrial Establishments (Conferment of Permanent Status to Workmen) Act, 1981. In fact, the Court states that: “The manner in which they were recruited would definitely take the backseat, since the provisions of the Act 46 of 1981 which is a beneficial legislation, will have to be strictly construed and applied de hors the method of recruitment.”

The High Court finally concludes by taking judicial cognizance of the fact that the State and Central Governments call themselves as Welfare Governments, but actually engage in unfair labour practices of employing temporary workmen even to discharge permanent work with impunity, especially in statutory corporations and the departments of the Government.

This decision of the Madras High Court brings to fore the blatant exploitation of the predominantly Dalit sanitary workers by keeping them as temporary workmen under lower salary, though they do a work of permanent character. This judgment gives impetus to the struggles of the sanitary workers against the Tamil Nadu Government to immediately undertake the exercise of identifying all so-called temporary workers towards provide them permanent status under the Tamil Nadu Industrial Establishments (Conferment of Permanent Status to Workmen) Act, 1981.

The larger battle remains – developing a political understanding of how the caste system and the concept of untouchability has emerged alongside neoliberalism and urbanisation through various forms of sanitation work, and one of the most essential and radical steps in the struggle for justice for the workers is the struggle against caste system – the annihilation of caste.

Sanitary workers have been exploited under the daily-wage and contract systems with the threat of losing their jobs constantly hovering over their heads especially if they were to unionise or demand due wages and other conditions of service. The Modi government, through the Occupational Safety, Health and Working Conditions Code, 2020, will be granting legal status and sanction to this illegal practice of contractualization. In particular, “sanitation works, including sweeping, cleaning, dusting and collection and disposal of all kinds of waste” are excluded from the definition of core activity, as such the indiscriminate use of contract labour is granted express legal sanction. This will result in a greater social and economic exploitation of the predominantly Dalit sanitation workforce and this is a challenge that workers will have to be geared up to fight.