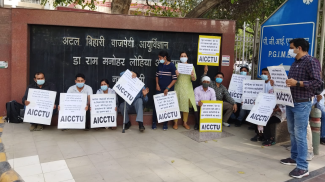 Delhi has been the epicentre of successive Corona waves that devastated the nation since 2020. From number of infections to number of deaths, the National Capital Region has been second to only Maharashtra in the last two years. When the deadly second wave appeared in April-May, 2021, patients from almost every alternate household from every locality of the city were rushing in search of hospital beds.

It was the doctors, nurses and medical workers in Delhi hospitals who risked their own lives to save thousands of people during the Covid peak. It was these health workers who had to overstretch themselves to compensate for the massive shortage of health infrastructure in a situation of Pandemic. The Modi government that has systematically reduced health budget and given away public health infrastructure to private hands did what it does best - empty political rhetoric. Rather than ensuring proper working conditions for the health workers, it arranged for showering flower petals on health workers.

The medical workers in several Delhi hospitals unionised under AICCTU have been resisting the retrenchments since day one. Workers in LHMC, RML and RAKCON have been protesting against these retrenchments. The sit-in Dharna at LHMC continues since the first of April and the workers are relentless in their struggle for almost a month now.

AICCTU demands that the Modi led BJP government should stop the empty rhetoric and take back the Covid Warriors to work with continuity of services, back wages and associated benefits. ν