Striking A Path To Politics 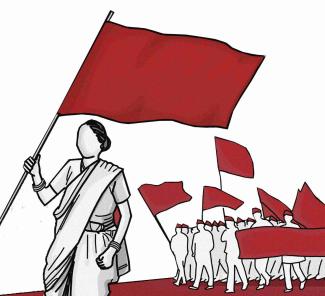 A worker is a mute machine of labour, as far as managements in the capitalist system are concerned. Managements are concerned about the machine only if it stops producing. Just like the owner of a machine claims credit for the results of mechanized labour, so too, companies claim to be producers of the products manufactured through the labour of the human being, the worker. In this system, a strike is the only a method through which workers are heard.

The capitalist structure of government is fashioned out of the subordination and enslavement of the working class, who are reduced to a labouring machine and whose humanity is stolen. The State acts as the agent of the corporates in ensuring the denial of constitutional and statutory entitlements of workmen, leaving them resisting not only the powerful managements but also the power of the State.

The legal rights of workers are flouted by managements across the country. Workers are made to work for 12 -16 hours a day without overtime payment and are denied mandatory statutory documentation. Despite the Supreme Court judgments that non-payment of minimum wages amounts to bonded labour prohibited under Article 23 of the Constitution, workers across the country are denied minimum wages without an efficacious remedy. There is a rampant victimisation of workers who make claims, through disciplinary action, issuance of sham chargesheets and dismissal after a charade of non-compliance with the principles of natural justice. In fact, the Managements often use state mechanisms to victimize workers, whether by filing spurious criminal charges, or by seeking injunctions from civil courts to restrain workers from exercising their right to demonstrate.

The State, on its part, turns a blind eye to the violations by managements. The crony-corporate nature of the current Union government is evident from its anti-worker and pro-management policies. As per official statistics, workers in the unorganized sector constitute about 93% of the total work force in the country. However, the government is further entrenching insecurity through the introduction of fixed term employment. Other “reforms” adopted by the Union and state governments in favour of corporates including the introduction of compounding of offences, increasing threshold limits to exclude mid-sized establishments from the ambit of  statutory regulation,  increasing licence periods, reduction of limitation period for raising industrial disputes, introduction of exemptions, deemed registrations of establishments for government lapses, reduction of cess, self-certification etc.   During the COVID crisis and thereafter, the regime embraced its role as a systematic and wholescale violator of rights of workers. Last and not least, the labour codes sought to legalise all those that were hitherto illegal and are being brought into force replacing the older labour statutes in the name of “ease of doing business”. They clearly illustrate the deep commitment of the Union government in dismantling labour rights.

In this context, legal struggles have inherent limitations. At the outset, the limitations of the judiciary itself – heavy pendency and red-tapism make any speedy resolution unlikely.  Moreover, legal battles often result in the granting of legitimacy to a flawed system that the workers are forced to engage in. These processes depend on the limited inclination of the individual judges to implement the law fairly. Courts often grant stamps of approval to illegalities of the Management and fail to substantively enforce statutory entitlements of the worker.

The role of the Union

With the abundance of the unemployed, Lenin has explained that the “the individual worker becomes absolutely powerless in face of the capitalist”, since he is replaceable by the next worker. The management seeks to reduce wages and increase working hours to maximize their profits, and any individual worker opposing this is substituted by someone more compliant. The situation is not very different today. Of course, workers have the protection of labour laws, which inter alia mandate a minimum wage and overtime payment for work more than eight hours. An individual workman can seek to claim these statutory entitlements, but subject to the caveats that she is likely to be terminated, she would have to spend years seeking justice, she is unlikely to have been given the documentation that enables her to prove her case and is not guaranteed any success through the adjudicatory mechanisms provided by these statutes.  Therefore, Lenin’s statement on the absolute powerlessness of the individual worker in the face of the capitalist holds good.

The unity of workers, in the form of a Union, then enables some level of bipartite or tripartite discussions, where worker and management are at the same bargaining table. In fact, given the power disparity between the workman and the management, Trade Unions are the only way to ensure the voice of workers, against their exploitation, to be heard. With the rise of collective class-consciousness, there is a possibility of collective bargaining. However, in the eyes of the Management, the worker is reduced to the labour she provides. Like Lenin said - “When industry prospers, the factory owners make big profits but do not think of sharing them with the workers; but when a crisis breaks out, the factory owners try to push the losses on to the workers.” Hence, the willingness of the Management to bargain is restricted to minor economic concessions that will allow it to continue its massive wage theft. If, in the opinion of the Management, the Union is claiming too much, then its constituent workers are replaceable.

The Strike as a Tool to reclaim Humanity

In this context, the strike is a mechanism through which workers can claim not only their dues, but also their dignity and humanity. It is only through a strike that the Management is forced to realize that all the money it possesses will be of no avail without the working hands of the labourers. In the face of an intractable employer, a strike is used to claim fair and dignified work and working conditions.

The strike has long been used as a tool of last resort of the working class to make claims to a share in the management’s profits and to economic emancipation. The right to strike is accepted in international law. In Indian law, it is given the position of a statutory, not Constitutional right, and subject to the regulation and restrictions imposed by the legislature in the ID Act, 1947.

Strikes differ from protests (for which there is fundamental right) in that they involve a cessation of work. As Dr. Ambedkar states

".When a worker strikes, all that it means is that he commits a breach of contract of service : there is nothing more in it, and nothing less in it. …A breach of contract of service is not a crime.. That means it is only a civil wrong.. . And, further, it is a civil wrong for which the remedy can only be damages and never a specific performance.. [T]he Indian Legislature does not make a breach of contract of service a crime because it thinks that to make it a crime is to compel a man to serve against his will ; and making him a slave. To penalise a strike, therefore, I contend, is nothing short of making the worker a slave. For what is slavery ? As defined in the constitution of the United States, slavery is nothing else but involuntary servitude. And this is involuntary servitude. This is contrary to ethics; this is contrary to jurisprudence."

According to Dr. Ambedkar, to criminalise strikes would amount to bonded labour. However, he acknowledged that  “The economic impact of the working class is the power inherent in the strike… As it is, this power is not adequate for the defence of the interests of the working class. It is maimed by legislation and made subject to injunctions, arbitrations, martial law and use of troops.”

It may be kept in mind, that the Industrial Disputes Act, 1947 gives a one month imprisonment period for illegal strikes in public utility services. The Supreme Court has also held that wages for strike period could be deducted unless it is proved not only that the strike was legal, but also that it was justified. This is extended by the Industrial Relations Code to ALL establishments, while further restricting the ambit of a legal strike. The position is drastically worsened in the Industrial Relations Code, 2020 (the ‘IR Code’) which has been passed by the Parliament and may now be brought into force with the stroke of a pen. The IR Code brings in the requirement of prior notice in all industrial establishments across the board, not only public utility services. Effectively, even in cases of blatant violations by establishments and in situations that require urgent collective action on the part of the workers, they must wait half a month to exercise their rights. The Code also makes strikes during the pendency of proceedings before the tribunal, or 60 days after, illegal, effectively enabling the management to take away the right of workers to strike by instituting legal proceedings. Importantly, the Code now makes it a penal offence punishable with a fine of minimum of Rs. 10,000 to a maximum of Rs. 50,000 for those who incite or instigate participation in an illegal strike, or knowingly spends money in furtherance of it.

A strike is also dealt with a heavy hand by both Managements and state agencies. In the words of Lenin, ““Strikes, therefore, always instil fear into the capitalists, because they begin to undermine their supremacy.”

The future of the strike

The strike, however, must be seen as a ‘school of war’ and not the war itself according to Lenin, who viewed strikes as part of the larger process of politicization of workers that would train them for a revolutionary struggle. He says that “From individual strikes, the workers can and must go over, as indeed they are actually doing in all countries, to a struggle of the entire working class for the emancipation of all who labour.” This is of vital significance in the current political context of growing state-sponsored labour insecurity. The potential of individual strikes against a single management can only result in some level of economic relief for employees.  In the context of profound insecurity too, economic struggles of the organized labour retain its striking power but needs to expand its scope and scale. The organized working class should also espouse the cause of the so-called contract labour, fixed term labour and trainees, who work on the same footing but are denied similar wages and service conditions. Regular employees should realize the larger implications and its impact of permanent jobs being eaten up similarly. The organized working class should join hands with the unorganized and the peasantry.

In this view, the future of strikes are those that are not just establishment-based alone, but that seek larger political changes.

The potential of strike as a weapon cannot be undermined, but must be used to seek social and economic emancipation of all workers. This is something that is inherently contrary to the agenda of the ruling powers. The transition from the economic struggle to the battle against the capitalist, communal and fascist union government is something that the working class must embrace. The tool of strike must be imbued with political colour to reach its true potential.