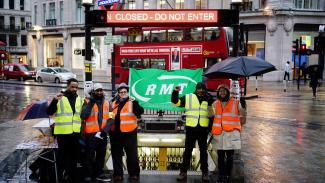 Thousands of workers of the London Tube (Underground Metro) embarked on two 24 hour strikes on March 3 and March 1 against the spending cuts and mass layoffs. The strike was called under the banner of the National Union of Rail, Maritime and Transport Workers (RMT) union. Picket lines were organised outside various metro stations in London by the striking workers.

The striking workers rejected the decision by Transport for London (TfL) to cut 600 jobs in the London Tube along with cuts in pensions and worsening working conditions. London Underground Limited (LUL), a subsidiary of TfL runs the underground rapid transit system serving Greater London and some parts of Buckinghamshire, Essex and Hertfordshire in the United Kingdom.

According to Tube workers, amid the COVID-19 pandemic, the cash strapped TfL is attempting to pass on the financial burden on to the workers by slashing the funding. Such moves will directly impact the Tube work force and their jobs security and pensions. The workers also rejected the plans by TfL to force all underground workers to work night shifts.

On March 3, RMT general secretary Mick Lynch said that “the funding crisis at TfL which is at the heart of this dispute is not of our making and our members are not prepared to take a hammering to pay for it. This week we have seen workers fighting back across London against attacks on themselves and their colleagues from political machinations that are out of their control. They have sent out the clearest possible message that they expect the threats to jobs and pensions to be lifted and basic assurances to be given.”

According to reports, TfL has made plans to make fresh cuts worth £400 million (USD 533.52 million) on top of other cuts made earlier. The striking workers warned of further industrial actions if the TfL authorities and the London mayor refuse to give assurances on jobs, pensions and working conditions in the midst of a financial crisis. ν