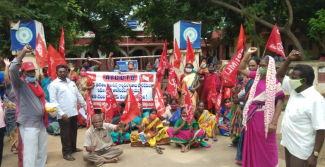 A protest was held on 29 June at the Rajeev Gandhi Institute of Medical Sciences (RIMS), Srikakulam campus, to demand pending wages. The ‘A-1 Facility’ of Mumbai had the contract for sanitation works at RIMS Srikakulam that ended in the month of May. The contractor ran away without paying wages for the months of March, April and May. The protest on 29 June organized by the Contract and Outsourcing Workers Union affiliated to AICCTU raised the demand of stern action against the A-1 Facility and immediate disbursement of pending wages of 3 months. Sanitation workers joined this struggle against the management of A-1 Facility in good numbers.

On 2nd July, security guards joined a protest organized by the Contract and Outsourcing Workers Union demanding implementation of the government order, GO.549, issued by the Andhra Pradesh government that mandated a wage hike of Rs. 16000 per month to security guards.

On 19 July, sanitation workers associated with the Contract and Outsourcing Workers Union and employed in various Community and Primary Health centers also submitted a memorandum to the DCH of Srikakulam district demanding implementation of the GO.549. The memorandum also detailed the violations of legally mandated rights of sanitation workers, including non-payment of wages, denial of minimum wages and PF benefits by contractors. The DCH assured workers that action would be taken against the contractor and the issue would be resolved at the earliest.

School sanitation workers of Andhra Pradesh are demanding an honorarium of Rs. 6000 per month, which was promised by the YSR Congress in its election manifesto. The state government is not implementing this promise, and sanitation workers are paid only Rs. 1000 per month. The aayahs and mid-day meal workers also joined a protest organized by AICCTU at Mandal revenue offices in Chatrai, Musunuru and Reddy Gudem mandals in Krishna district on 12, 14 and 16 of July respectively. The issue was further escalated and a rally and dharna were organized at the Nuzvid Sub-Collector’s Office on 19 July.

On 23 July, protests were held at district headquarters of four districts in AP – Srikakulam, East Godavari, Krishna and Chittoor – at the call of central trade unions. AICCTU comrades participated in these protests.