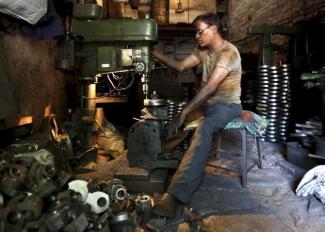 More than 50 years after the enactment of the Contract Labour (Regulation and Abolition) Act, 1970 [‘1970 Act’], the Government is seeking to grant statutory sanction to the burgeoning contractualisation across public and private sectors. The Occupational Safety, Health and Working Conditions Code, 2020 [‘OSH Code’], which consolidates a number of beneficial workers legislations including the 1970 Act, practically authorizes the use of contract labour in a number of core, perennial and necessary functions.

At the outset, it must be remembered that the statement of objects and reasons of the 1970 Act read as follows:

“The system of employment of contract labour lends itself to various abuses. The question of its abolition has been under the consideration of Government for a long time.. the general consensus of opinion was that the system should be abolished wherever possible and practicable and that in cases where this system could not be abolished altogether, the working conditions of contract labour should be regulated so as to ensure payment of wages and provision of essential amenities.  … Under the Scheme of the Bill, the provision and maintenance of certain basic welfare amenities for contract labour, like drinking water and first-aid facilities, and in certain cases rest-rooms and canteens, have been made obligatory. Provisions have also been made to guard against defaults in the matter of wage payment.”

This highly beneficial legislation, thus had its core a recognition of the multiple shortcomings of the contract system and a commitment towards its abolition to the maximum possible degree. What is seen in the OSH Code is a very visible policy shift towards promotion of contract labour, as opposed to its abolition.

To start with, who would fall under the ambit of the Act? The OSH Code shifts the applicability of the Part on Contract Labour to establishments and contractors with 50 or more contract workers [from 20 in the 1970 Act]. Hence, contractors with up to 49 workers would not be mandated to be licenced, and would not be required to fulfil obligations including payment of wages in accordance with the law and within the prescribed period.

Not only this, but the very definition of ‘contract labour’ in the OSH Code has been modified to exclude “any worker (other than a part-time employee) who is regularly employed by the contractor for any activity of his establishment and such worker's employment is governed by mutually accepted standards of conditions of employment and gets periodical increment in pay and other welfare benefits.” What does this mean? Effectively, the Principal Employer can argue that the workers employed in core functions of his establishment are not even contract employees under him, since they are regularly employed by the contractor. Moreover, the failure to define ‘regularly employed’, periodic increment’ and ‘welfare benefits’ allows for abuse and anti-worker interpretations. Finally, the use of ‘mutually acceptable standards’ is absolutely unacceptable in an unequal relationship – the entire object of the law is to provide minimum standards that cannot be contracted out.

The next provision is Section 57, which prohibits the employment of contract labour in core activities of any establishment. This is a prohibition in name only.

sanitation works, including sweeping, cleaning, dusting and collection and disposal of all kinds of waste;

running of hospitals, educational and training Institutions, guest houses, clubs and the like where they are in the nature of support services of an establishment;

courier services which are in nature of support services of an establishment;

civil and other constructional works, including maintenance;

gardening and maintenance of lawns and other like activities;

housekeeping and laundry services, and other like activities, where these are in nature of support services of an establishment;

any activity of intermittent nature even if that constitutes a core activity of an establishment;”

This is shocking and condemnable. How can perennial works such as sanitation, watch and ward and other important services be excluded from the definition of core activity. Such definitional exclusion makes the intentions of the government very clear.

Furthermore, even the prohibition of employment of contract labour in core activities would not apply if “(a) the normal functioning of the establishment is such that the activity is ordinarily done through contractor; or (b) the activities are such that they do not require full time workers for the major portion of the working hours in a day or for longer periods, as the case may be; (c) any sudden increase of volume of work in the core activity which needs to be accomplished in a specified time.” It is thus open to every single establishment to claim that as per its normal functioning, core activities are ordinarily done through a contractor, and that would exempt them from compliance!

The OSH Code requires contractors to be licensed. However, if a contractor does not fulfill the requisite qualifications or criteria of his licence, he may be issued a ‘Work Specific Order’. Again, the Code displays its lack of commitment towards minimum standards.

At the same time, the Code mandates registration of establishments. If an application is not responded to within the prescribed period, then the establishment is deemed to be registered. The costs of the failures of the government are now to fall on the backs of workers.

Again, the Code has shifted minimum statutory standards to optional items that the Government may choose to issue a notification on. Therefore, there will now be no enforceable right to, inter alia cleanliness and hygiene, potable drinking water; adequate standards to prevent overcrowding or sufficient arrangement for latrine and urinal unless the government chooses.

In the 2019 Draft OSH Code, there was a provision that would have been highly beneficial for workers, and gave some hope that the Code was meant to provide protection in some measure to workers. It was provided that if the Principal Employer engaged contract workers through an unlicensed contractor, the workers would be deemed employees of the principal employer. What happened to this provision in the 2020 Code? The consequence of engagement of contract labour through unlicensed contractor would be “deemed to be in contravention of the provision of the code”. This is a provision which has no real value.