IREF Launches "Save Railways, Save DA, Save Employees" Campaign 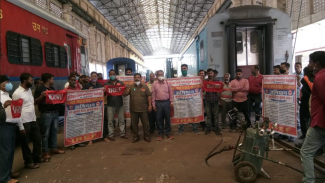 Indian Railway Employees’ Federation (IREF) affiliated to AICCTU organised a vigorous 15-day Campaign "Save Railways, Save DA, Save Employees" throughout Indian Railways from 1st July, 2021. The campaign culminated on 15th July in protest demonstrations and mass meetings by affiliated unions of IREF in various zones, divisions and production units/workshops including 18 divisions of 9 zonal Railways and 5 production units. Against the Modi government's policy of rampant Privatisation and sale of Railway assets, the campaign highlighted 15-point demand charter of burning issues of Railway employees. Immediate release of Dearness Allowance (DA) for employees and Dearness Relief (DR) for Pensioners impounded from 1st January, 2020 with arrears, stopping corporatisation of 7 Production units and against privatisation of train operations were main among the demands. Restoration of Old Pension System, 8hr. Duty for All, removal of ceiling of basic Pay of Rs.43,600/ for entitlement of Night Duty Allowance were some other important demands of the campaign. During the campaign, IREF also exposed the compromising role and inaction of the so-called recognised federations against freezing of DA by the government despite simmering anger among employees.

IREF also observed Black Day on 8th July in solidarity with Defence Workers against corporatization of Ordnance factories and promulgation of Emergency Defence Services Ordinance (EDSO) to gag the voice and right to strike of Defence workers.

Swindling away of Crores of rupees of DA by Modi govt.

In the midst of the campaign by IREF, there was an announcement by the Govt. on 14th July that the DA/DR would be released from 1st July 2021 but with no payment of arrears.

The Modi government on the plea of Covid Pandemic situation impounded the DA of central govt. employees, revised every 6 months, from January 2020 raised 4%, from July 2020 raised 3% and from January 2021 raised 4%. The revisions were kept on hold on the pretext of deep economic crisis whereas the skyrocketing prices of fuel with the cascading effect on the overall price of daily necessities kept eroding the real wages of the workers.

Amidst much fanfare of the announcement of DA payment by the Central Government, the real picture of swindling away of crores of rupees got blurred. According to our independent calculations, the amount of arrears for 48 lakh central govt. employees and 65 lakh Pensioners - (total 1 crore 13 lakh) due from 1st January, 2020 is around Rs. 3 lakh 43,634 crores which has been swindled away.

While Modi Government kept on harping on monthly pay of staff going up to Rs. 30,000 crores due to D.A. hikes, a colossal amount of arrears has been surreptitiously set aside, with no clarification as to where the money is utilised.