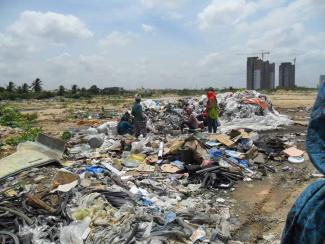 Waste pickers play an important role in waste management in Bengaluru. Waste pickers and informal waste collectors of the city are the backbones of the waste management system. While the municipal waste collection system of the city is supposed to collect 4,000 tons of solid waste that is produced every day, it is estimated that informal workers collect up to 1,050 tons of recyclable material on a daily basis, which amounts to a third of the city’s generated waste. A study says that the contribution of around 30,000 waste pickers in the city has helped the Bengaluru municipal body, BBMP, to save more than Rs. 84 crores from the waste collection and management annually.

In spite of the invaluable contribution that they make for waste management and recycling, and to keep the city clean and ‘green’ they remain an invisible force in the city, devoid of even recognition from the administration of being a laborer. The Swachh Bharat Mission as well as the SWM (Solid Waste Management) rules of 2016, section 11(b) aims to make cities, towns and villages cleaner on a national scale. Despite both these policies recognizing waste pickers as an integral component of urban waste management system, that recognition has not translated into any active measure for the large number of waste pickers in Bangalore due to the indifference of the authorities towards identifying their contribution and integrating them with the existing system. The large number of waste pickers still continue to make up the fringe.

Other than this, waste pickers in Bangalore face a multitude of challenges on a daily basis. These workers do not have access to basic safety equipment that are indispensable in this line of work involving daily rummaging through hazardous materials i.e. these workers are forced to put their health and safety at stake every day in order to earn their daily bread. These workers do not possess any authorized identity cards declaring their occupation thereby making it very easy for the civic authorities to intimidate them. The tangible issues that these workers face like poor health, irregular work, low income, and regular harassment have farther aggravated by their position in the caste structure.

Since millennia all occupations related to handling waste and garbage have been relegated to the people in the lowest rungs of the caste hierarchy. This practice has contributed in strengthening these workers’ low status and associated stigma in the society. It has come up in many studies that the majority of waste pickers across India belong to the lowest castes. This again and again proves that “Caste is not just a division of labor, but it is a division of laborers” as stated by Babasaheb Ambedkar.

It is estimated that around 60% of the waste pickers comes from the community of 42 Lakh migrant workers, which in total forms 44% of the total population of the city. Lockdown in India has shown that economic coercion & lack of livelihoods in their home villages compels migrants to other parts of the country where work is available. It is agrarian distress in these regions that forces laborers to migrate. This results in the swelling of the ranks of a ‘reserve army’ of cheap laborers – another key component of the neoliberal accumulation strategy. Further, the irregular labor arrangements of the informal economy leave workers unprotected without any social protection.

AICCTU while organizing migrant waste pickers of Bengaluru observed that they face manifold challenges and exploitation. The area where AICCTU works contains waste picking workers mainly from West Bengal, and some from Odisha, Maharashtra and Karnataka. They live in precarious condition in unrecognized slums replete with harassment of authorities. Their jhuggis are all made of tin sheds without even basic amenities like water and electricity.

Regular harassment of police, extorting money on a regular basis is a brazen phenomenon. Arresting waste pickers under false accusations without even an FIR, beating them overnight and leaving them after extorting thousands of rupees is also common. BBMP after one short stint in 2011-12 have stopped giving ID-cards to informal waste pickers to recognize their work, leaving them without any proof of why they are on the streets while collecting waste. This leaves them at the mercy of the authorities while they go for work, for instance, police harassment at work place is rampant.

Because of the migrating nature of work, there is no proper education for their children. COVID-19 closure of schools have made the situation worse. With the absence of cell phone, inconsistent or no electricity, lack of access to internet, meant that children of workers are suffering years of compromised, and most of the time, no education.

The introduction of NRC-CAA-NPR has added a layer of prejudice to the existing social stigma against the migrant waste pickers as they are now vilified and targeted as Bangladeshis despite being natives of West Bengal. In most of these Bengali migrant worker families, the women supplement the family income by working as domestic helps in many housing complexes in the city. In November, 2019 residents in some of these complexes in Bangalore went so far as to seek police help to detect ‘legal identity’ of their Bengali-speaking domestic helps. In January, 2020 the police destroyed makeshift ‘jhuggis’ of migrant workers at Kariyammana Agrahara on suspicion of there being illegal Bangladeshi migrants.

The unholy nexus of neoliberalism and Hindutva under the BJP-RSS regime in India had the effect of paralyzing pro-poor public policies on one hand and repression of dalits, and minorities on other. The precarious condition of the migrant waste pickers in Bangalore should be seen in the light of these socio-economic conditions. Inequality and distress grows as the state squeezes public expenditure in social welfare. The expanding informal sector with the increasing migrant population further provides the government with a leeway to escape its responsibilities. The current trend in the city is to open the floodgates for entry of NGOs to make this section dependent on freebies provided using pro-corporate funds. While this is presented to the progressive-democratic sections as a means of addressing this deprivation, the real solution lies in organizing them on the issues of their livelihood, dignity and right under the red banner.