No to Corporatisation of Defence Factories! Resist EDSO 2021! 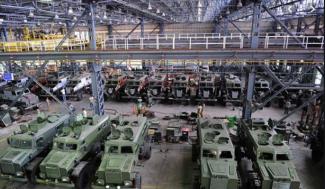 In yet another move of dismantling the central sector, the Modi Government, in a swift move, decided to convert 41 Ordnance factories into 7 corporations which is expected to lead to privatization eventually. The Government ignored all previous commitments and implemented its well-designed plan of corporatization when negotiations were pending and when the conciliation process was inconclusive.

The Secretary / Defence personnel had sought suggestions from central federations for a viable alternative and a robust proposal which could help increasing the functional productivity of defence units. The proposals by federations to achieve 30 thousand crores turn over were ignored and not perused at all. In the meanwhile, the Defence Production & Export Promotion Policy, 2020 clearly stipulated that disinvestment shall be pursued in all seven corporations. In the course of conciliation proceedings, the ministry informed the CLC that the decision of corporatisation is a policy decision of the government and cannot be treated as a dispute while the Secretary / DP was assuring that federations will be taken into confidence and while the CLC was trying to find an amicable solution to the vexed issue. Hence, the conciliation proceedings were declared as a failure and the federations had no other option but to resort to an indefinite strike from 26th August.

The Central Government retaliated by promulgating an extraordinary ordinance called Emergency Defence Service Ordinance (EDSO) 2021. The President signed the ordinance in no time and was put into effect immediately. This draconian ordinance not only prohibited strike in defence sector but also expanded the definition of the strike beyond the clauses of even the new IR Code. Even peaceful protests like Sit-in, refusing the optional overtime work also are defined as a strike in this ordinance. Severe penal actions against strike including dismissal and arrest without warrant are stipulated for any violation. The police and administration are accorded extraordinarily sweeping powers to come down heavily upon the workmen.  All those hitherto illegal actions and measures are accorded legal sanction by the cruel repressive ordinance.

Being Thrown to the Streets

Defence Minister Sri Rajnath Singh tried to pacify the federations by assuring that the service conditions of employees will not be affected as all these seven corporations will be 100 per cent government-owned. But the fact remains that all employees were appointed by the government itself under Article 309 of the Indian Constitution and are paid through the consolidated fund of the Central Government. Never it was mentioned, in their appointment letter, that their service conditions might change in future. But now, their salary will be paid not by the central government but by PSUs and the economic fate of these PSUs are highly vulnerable, uncertain and ambiguous. BSNL is there before all as a witness.

The Ordnance Factory Board has already declared 275 items as non-core. The defence authority has not yet prepared any road map to be followed in those units. The important question of pension has not been resolved. Pension will be only paid to the employees under the old pension scheme. What will be the fate of 40,000 employees who are under NPS remains a mystery. Now, 14% of the wages is paid by the government to the NPS fund and the employees pay 10%. After corporatisation, the government share will be reduced from 14 to 10 percent because only the Central government employees are entitled to 14 percent and not the employees of any corporation.

The Congress led INTUC and its federation took a U-turn during a meeting on 16th July with the defence minister Rajnath Singh and supported the BJP government’s decision of corporatization of 41 factories. It formalised the split within the ongoing united movement of defence employees by handing over a sealed envelope to the defence minister. The INTUC leadership is attempting to conceal their betrayal to the defence workers movement by withholding the information of their surrender from their ranks. No internal circulars were issued within their organisation. Although prominent INTUC and their federation leaders avoided participating in the all India protest day against corporatisation and EDSO on 23 July, their unit-level leaders joined the united protest.

It is refreshing to note that despite threat and intimidation from authorities, left leaders at the unit level, AICCTU leaders and members of Cossipore Gun Shell factory, participated in the protest on 23 July. Just a day before, a circular was issued by the OFB to the section / factory managers to identify the employees / gazetted officers of their factories taking part in the protest programme of CTUs. Defying inclement weather, AICCTU and other CTUs organised protest demonstrations in all the three Ordnance factories, namely, Cossipore Gun & Shell, Icchapur Rifle factory and DumDum Ordnance factory.