No to the US Imperialist Project in Cuba! 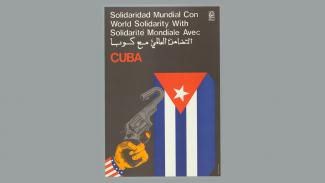 The US must end the inhuman blockade of Cuba!

In June, the UN General Assembly overwhelmingly voted to condemn the US led trade embargo against Cuba, with 184 countries supporting an end to the embargo, while 2 opposed it (the US and Israel being the only two opponents). The resolution has passed for the 29th consecutive time in the meeting of the UN General Assembly demonstrating that the voices against global imperialism remain vocal as always.

For six decades, the US has imposed an embargo (or rather a blockade) of Cuba in order to ensure that Cubans are forced to live a life of misery and prevent the Cuban government from purchasing essentials. The so-called supporters of the ‘Free Market’ found no issues with the government regulating global trade with Cuba. In order to counter the effects of the blockade, Cuba initiated greater spending of the GDP on healthcare and welfare, in a policy known as ‘humanistic austerity’. Despite economic crisis perpetrated by the blockade, the average life expectancy rose on the island.

Cuba was at the forefront of the global effort to contain the COVID19 pandemic, sending teams of doctors to countries like Italy. Like all other countries, Cuba faced a crisis with the pandemic as its economy took a major blow with decline in revenue. While the Obama administration had reopened diplomatic relations in its second term, the Trump administration turned the policy around to apply ‘maximum pressure’ on the government, preventing Cuban expat workers from sending money back home and strangle any economic growth on the island. This has amounted to essentially sabotaging the efforts for ending the pandemic, as despite the initial success in containing the cases of infection, Cuba has had seen a resurgence in COVID19 cases due to the lack of availability of PPE kits. Cuba has even managed to develop its own vaccines but has been unable to manufacture in sufficient quantities to effectively vaccinate all its citizens due to the embargo that is affecting Cuba’s ability to import raw materials.

The unrest generated by the resurgence of the pandemic in Cuba has given the US an opportunity to beat the drums of regime change, with the US senator from Florida Marco Rubio leading the charge. Fake-news has also been weaponized in order to spread misinformation regarding the extent of the protests with news outlets like Reuters circulating fake images. Hundreds of thousands of Cubans have turned up in protests against US imperialism in different parts of Cuba. Thousands of Cuban expats all over the world have also turned up in protest against the US interventionism. Not only is the US embargo preventing Cubans from accessing life-saving drugs and essential goods, the attempts at US interventionism is suppressing the possibility of a dialogue on the shortages faced by Cuba.

Of course Senator Rubio wants us to forget the fact that the nurses in the US were forced to wear garbage bags due to a lack of PPE kits at the beginning of the pandemic. While he lectures Cuba about democracy, his own party is engaged in blatant attempts at voter suppression. The Republicans continue to prevent any congressional enquiry into the attempted white-supremacist coup in January that sought to overturn the 2020 presidential election results. The attempt to foster regime change in Cuba seems to be a larger design that refocuses Washington’s imperialist designs towards Latin America. Ongoing attempts to destabilize Haiti, Cuba and Nicaragua alongside the installation of pro-US fascist rulers in Venezuela, Bolivia, Peru, and Brazil demonstrate a systematic plan for the re-establishment of US imperialism in the continent.

We extend our unwavering solidarity and support to the Cuban people and demand the end to all sanctions.