War on the Urban Poor: Demolition and Displacement of Khori Gaon in Haryana 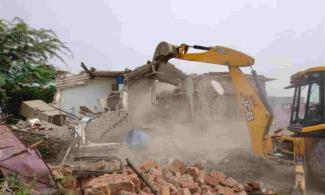 The urban poor of the Delhi-NCR region have been reeling under the disastrous impact of successive lockdowns and the fatal second wave of CoVID. The incessant spells of monsoon rain taking over the city’s roads and spaces have added to their woes. And now the Haryana government has dealt yet another ruthless blow to them - a massive demolition of thousands of houses is currently underway in Khori Gaon situated in Faridabad, administratively under Haryana.

The demolition is being carried out under the pretext of a Supreme Court (SC) verdict (dated 7 June 2021) that ordered the clearing of ‘illegal encroachments’ within the forest land in the area. The Haryana government, without any delay, started the process of massive demolition in the area. It did not bother to conduct a survey of the area before demolition, nor did it make any attempt to formulate a comprehensive slum development and rehabilitation policy to stop such a huge humanitarian disaster.

Destroying Homes of the Urban Poor and the Workers

Khori Gaon hosts more than 15,000 houses with a population of more than 1 lakh. Several residents who face displacement today have been residing in the area since 1970s, when mining and quarrying was a booming economic activity in this part of the Aravallis. They migrated from several states such as UP, Bihar, MP, Rajasthan and West Bengal in search of jobs. Subsequently as mining activities halted, they started looking for other employment in the Delhi-Faridabad area. Khori Gaon became home for urban poor from adjacent Delhi who started shifting to the area. Urban workers who have been denied the right to dignified housing in the city landed up in this rugged terrain which did not have much housing, municipal and infrastructural facilities.

Khori Gaon is being demolished in the name of preserving forest land. The fact is that the destruction of the Aravallis started with mining activities in this fragile landscape, and not by the urban poor who are being attacked now. Homes of the urban poor are being bulldozed while huge commercial complexes built by corporate houses remain untouched. Homes for the poor in Khori Gaon are surrounded by the Taj Vivanta Hotel, the Radha Swami Satsang Bhawan, Vedanta’s hotel and several luxurious farm houses. While these structures remain untouched, homes of the poor are being demolished.

The Supreme Court verdict is merely an excuse for the Haryana Government to unleash its anti-poor agenda. This is not the first time that demolitions are being carried out in Khori Gaon. A demolition notice was delivered here in March 2020, and thousands of houses were demolished in September 2020 when the country was reeling under first CoVID wave and at a time when migrant and informal workers in Delhi-NCR and other cities were in acute distress. Demolition of many hundreds of houses also took place in April-May this year, when the deadly second wave hit Delhi-NCR. The Haryana Government is responsible for the grave humanitarian crisis in Khori Gaon. Thousands of people are homeless now. They are being forced to live under the open sky, as the relief efforts by the government are inadequate and close to non-existent.

As this huge humanitarian crisis is unfolding in the National Capital region of the country, the government is not even trying to device and implement a comprehensive rehabilitation plan for the displaced residents.

Before the demolition began, the Haryana CM promised that people with Haryana voter id cards would be considered for rehabilitation. The Faridabad Municipal corporation said in a press statement on 13 July (a day before the demolition started) that displaced residents will be given Rs. 2000 as allowance per month for renting a place till they are rehabilitated. This amount is obviously insufficient for renting a place of residence in the Delhi-NCR region. Residents of Khori Gaon were also told that residents who have voter ids or electricity bills would be given rehabilitation rooms. The cut-off date for being eligible for the rehabilitation is 2003, which means that those eligible for rehabilitation have to show proof of residence in the area on or before 2003. This criterion excludes a majority of the current residents. Many residents do not have documentary proof, as it is very difficult to get required documents from the Haryana government. Secondly, many residents who have documents, do not have proof of residence for 2003 or prior to that. Many arrived after 2003. It is 18 years since 2003, and those who had bought lands and built up homes in this period are not eligible for rehabilitation.

Moreover, the promised EWS flats will have to be bought for around Rs. 4 lakhs. It will take 15 years for a family to repay the instalments for the flat. The families whose homes are being forcibly destroyed by the government are now expected to remain under debt to ensure housing for themselves. The relief package by the Haryana Government is thus a farce and a betrayal of the urban poor. The BJP and the Prime Minister Modi have repeatedly promised to ensure homes for every slum dweller. And now, after getting elected, they are organizing a brutal crackdown on the lives and shelters of more than 1 lakh urban poor.

Resistance by Khori Gaon and Crackdown by the Government

As bulldozers break their homes, the residents of Khori Gaon are also at the receiving end of police brutality, arrests and framing by the Haryana Police. The residents have been raising their voice against demolition through mahapanchayats, demonstrations and meetings. At every juncture, they have faced intimidation and brutality by the Haryana police. Several student and trade union activists are also bearing the brunt of this crackdown. They have been forcefully detained, arrested and slapped with absurd charges. The Haryana government has not only displaced thousands of urban poor and workers, it is trying to make sure that the voices of resistance from Khori Gaon do not reach other citizens of the country.

Appeal to Residents of Delhi-NCR

Rise Up against Demolition and Displacement, Demand Immediate Rehabilitation

We appeal to the citizens and activists of Delhi-NCR to collectively raise their voices against the ongoing brutality on the city’s poor and workers. AICCTU demands:

2. Provide immediate relief to those who have been displaced already.

3. Guarantee compensation for each and every resident of Khori Gaon whose houses have been destroyed by the Faridabad Municipal Corporation.

4. Ensure rehabilitation to the displaced residents of Khori Gaon near their demolished house. Do away with the exclusionary criteria of demanding only Haryana documents. The cut-off year of residence for eligibility must be changed from 2003 to 2020. No elected government in the country has a right to displace any urban worker in the midst of a pandemic and economic crisis.