AICCTU Greetings To the 8th Congress of GEFONT, Nepal 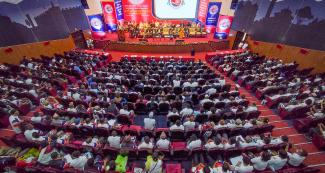 The 8th Congress of the General Federation of Nepalese Trade Unions (GEFONT) was held at Kathmandu from 23 to 26 July 2022. Com. K. P. Sharma Oli, the president of CPN-ML and former Prime Minister of Nepal, inaugurated the open session of the Congress. Over 6000 workers attended the session. About 34 foreign guests from different countries, including India, Pakistan, Bangladesh, Sri Lanka, France, Italy, Turkey, Indonesia, Singapore, Sweden and others attended and greeted the Congress. On behalf of AICCTU, Com. Shailendra Kumar Sharma, National Vice-President, attended the Congress.

GEFONT organized a panel discussion on ‘Consolidated and Comprehensive Democracy for Dignity and Prosperity of Working Class’. All the foreign guests and leaders of GEFONT took part in it.

The patron of GEFONT Com. Vishnu Rimal inaugurated the delegate session on 24 July 2022. A total of 512 delegates from 21 affiliated national federations attended the conference that included 25% women delegates.

Greeting the delegate session on behalf of AICCTU, Com. S. K. Sharma congratulated GEFONT for the grand success of its 8th Congress and expressed solidarity with the militant working class movement in Nepal against the neo-liberal and imperialist onslaught. He said, "Ever since the inception of the GEFONT and the AICCTU in 1989, we have shared a cordial relationship. For the last 33 years, we have been keenly observing the progress of your organization and hailing your achievements in improving the working and living conditions of the working people of the country and in ensuring workers' rights. We are here to express our solidarity with the GEFONT and the working class of Nepal on behalf of the AICCTU and millions of workers of India. Our relationship is built upon a shared vision and strong commitment for attaining the common goal of building a socialist state".

"The crisis of capitalism is worsening day by day and is passed on to the shoulders of the working people. The rights of the working class are being snatched away. On the other hand, we are witnessing powerful movements across the globe against the attacks on labour rights, minimum wages and social security.

India, under the majoritarian, fascist government, has experienced a massive destruction of livelihood, rights and the constitution. The pandemic was used as a ploy to aggressively push the corporate neo-liberal agenda of the saffron forces. Four labour codes were enacted to replace all existing labour laws and to do away with protection mechanisms. The workers are being made as slaves. In the name of monetization, all public sector undertakings and government departments, including entire infrastructure of the country, are being offered on a platter to corporate houses. A large number of contractual and other informal workers are being thrown out of jobs. The Modi led BJP government has become the rule of corporate – communal - fascist forces.

The working class of our country continues to resist the rightist onslaughts on the working class through united platforms. The country has witnessed several nationwide protests, industrial and sectoral actions, including several all India general strikes. As a revolutionary trade union, the AICCTU has been in the forefront of all these struggles," he said.

The Congress elected Comrade Vinod Shreshth as the president and Comrade Laxman Sharma as the General Secretary with 57 member executive committee, including 18 office-bearers.