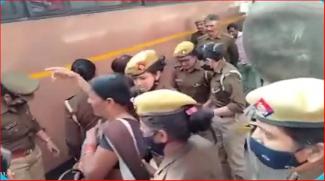 When the ASHA workers of Uttar Pradesh tried to submit their memorandum of demands to the CM Yogi Adityanath when he came for a program in Shahjahanpur on 9th November, the police not only stopped them from submitting the memorandum, but also brutally attacked them. One of the ASHA workers, Punam Pandey’s hand was broken, was stamped under the boot and was also attacked in the genitals. After physically assaulting the workers, the police filed cases against ASHA workers themselves.

The All India Scheme Workers Federation (AISWF- affiliated to AICCTU) rose up in protest against the attack on ASHA workers in UP. On 17th November protests were organised all over the country including UP, Bihar, Jharkhand, Uttarakhand and Odisha. AISWF sent a memorandum protesting the incident to the UP CM. The Federation demanded action against police officials responsible for the violence, registration of FIR against them based on Punam Pandey’s statement. They also demanded recognition of ASHA workers as government employees and wages at the rate of 18,000 rupees per month.

In Uttarakahnd’s Haldwani and in Odisha’s Raigada ASHA workers raised their voice against the violence.