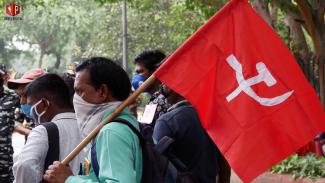 The National Convention of Workers was held on 11th November 2021 at Jantar Mantar, New Delhi, under the banner of Joint Platform of Central Trade Unions and Independent sectoral all-India Federations and Associations. The convention began with paying homage to many tall leaders of the Central Trade Unions, Federations/Associations, prominent persons in public life who died during Covid-19 period, the farmers who lost lives during the year long historic kisan agitation, including the recent Lakhimpur Kheri killings, and those people who died because of hate crimes, etc.

The convention called upon the workers to take the message down to the masses through intense activity in the states and districts, factory gates and so on and prepare the working class and common people in general to make the two-day countrywide General Strike during forthcoming budget session of Parliament (session starting from 1st February 2022) a massive success to further scale up the heightening ongoing united struggle to “SAVE THE PEOPLE AND SAVE THE NATION”.