The Story of Tripura Under the BJP Rule 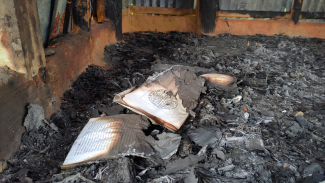 Tripura has been burning under the state terror and violence since the BJP assumed power in the state in 2018. The beginning of the BJP rule in Tripura was marked by repeated violence against political opposition, burning down of offices of Left parties and vandalizing symbols of tribal assertion. Given this backdrop of state-sponsored terror, it is not surprising that Tripura continues to see waves of state violence. The latest in this saga is orchestrated anti-Muslim violence and attacks on mosques and other Muslim establishments in the month of October this year.

Located far from the gaze of national attention, these violent incidents spread to different parts of northern Tripura. As various news reports suggest, these communal attacks were unleashed by miscreants who took part in rallies called by the Vishwa Hindu Parishad and the Hindu Jagran Manch. The country has seen similar patterns of anti-Muslim violence elsewhere too, where violence is unleashed after provocative and hate-spewing speeches given by activists and leaders associated with the RSS-BJP-VHP network. The communal riot in February 2020 in north-east Delhi started just after the BJP leader Kapil Mishra called for physical action against anti-CAA protesters. Hate and violence are the markers of the BJP rule all over the country today.

Use of UAPA to Suppress Facts

The Tripura police, that failed to contain anti-Muslim violence, started acting promptly to silence all attempts by journalists, lawyers and civil society members to bring facts to light. Four members of a fact-finding team of lawyers consisting of Supreme Court advocate Ehtesham Hashmi, Mukesh Kishore from AICCTU, Amit Shrivastava from Lawyers for Democracy and Ansar Indori from NCHRO were slapped with clauses of UAPA (Unlawful Activities Prevention Act) and several other sections IPC (Indian Penal Code). As citizens of this country and defenders of law, these advocates conducted a ground level fact finding into the targeted communal violence in Tripura. Journalist Shyam Meera Singh has also been slapped with UAPA for posting ‘Tripura is Burning’ in twitter in the context of the communal violence in Tripura.

Subsequently, reports of UAPA charges on 102 people for posting in social media came to light. Around mid-November, two journalists Samridhi Sakunia and Swarna Jha were arrested by the Tripura police when they went to rural Tripura for reporting on the violence. The Tripura Police crossed the state border and arrested these two journalists from Assam. Such is the desperation to silence ground level reporting of facts. The arrest of the journalists was made based on a FIR filed by the same Vishwa Hindu Parishad that indulged in anti-Muslim violence in the end of October.

AICCTU-AISA-AILAJ, along with other progressive organizations, raised their voices against the politically motivated framing of lawyers, journalists and civil society members under the UAPA. People from all over the country also protested against the vindictive arrest of two journalists. Subsequently the Supreme Court gave relief to the lawyers and journalist Shyam Meera Singh from arrest till further notice.

UAPA: A Tool to Strangulate Voices Critical of the Party in Power

The slapping of UAPA on lawyers, journalists and civil society members by the Tripura police is part of a pattern of the use of this draconian law to serve the political interests of the ruling regime.

In a series of incidents of hate crimes against Dalits, Muslims and working class, all conducted under the implicit protection of the ruling regime, UAPA has been invoked to protect the real criminals and imprison voices of justice.

Dalits were attacked by right-wing goons holding the saffron flag in hand in Maharashtra’s Bhima Koregaon on 1 January, 2020. The masterminds of the anti-Dalit attack, Sambhaji Bhide and Milind Ekbote, both close to BJP, are roaming free. The central government has rather slapped UAPA charges on several Dalit rights activists and trade union leaders and has imprisoned them for years. Such is the vindictiveness of the BJP regime that octogenarian activist father Stan Swamy was denied bail even when he was terminally ill and subsequently died in custody.

Anti-Muslim violence in north-east Delhi in February 2020 was followed by the arrest of several anti-CAA protesters, while the BJP leaders like Kapil Mishra who provoked the violence are roaming scot-free. UAPA was rampantly used against voices who spoke out against the dangerous design of CAA-NPR-NRC. Umar Khalid, Sharjeel Imam, Meeran Haider, Gulfisha, Ishrat Jahan and several other activists are imprisoned under UAPA even when the courts have time and again raised questions over the charges framed by the police. In the early months of 2018, 5 contractual workers at the Reliance Energy Ltd. and members of the Mumbai Electric Employees Union were arrested under UAPA. These workers were incarcerated for demanding regularisation of work and other basic right of the working class.

Should UAPA Exist in the Book of Law in a Democracy?

It is clearer than daylight that the sole use of UAPA is to unfairly persecute a person at the whims of the ruling power. It is a denial of the most fundamental principles of justice. Under UAPA, the police gets a much longer period of 180 days to file chargesheets against the accused. The UAPA also provides for denial of bail to an accused if the court finds “reasonable grounds for believing that the accusation against the person is prime facie true”. This essentially means that even if the version of the police is untrue and evidences forged, bail to the defendant can be denied. There are numerous evidences of the political use of police force by the ruling party for their sectarian interests. How can so much power be given to mere accusations, politically motivated in most UAPA cases, at the cost of freedom of a person? Can such blatant denial of fundamental right to justice and freedom be allowed in a democracy? The answer is a resounding NO.