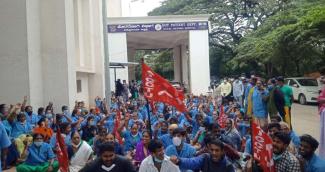 Frontline workers employed in Victoria hospital as housekeeping staff, ward attenders, lift operators, Data entry operators and security, have not been paid their wages for October 2021. Victoria Hospital was a dedicated COVID-19 facility, and these workers worked throughout the first and second wave of COVID-19.  The wages for the month of September had also been delayed and was only paid on 31st October.

The Payment of Wages Act, 1936 mandates that workers are to be paid their monthly wages on the 7th of every month. However, the Bangalore Medical College and Research Institute (BMRCI), which manages Victoria Hospital failed to ensure payment of wages for the month of October 2021 to the workers.  The Supreme Court, in the Asiad Games case in 1982 in People’s Union for Democratic Rights vs Union of India has held that making workers to perform their duties without paying them their due wages, amounts to forced labour.

Majority of the workers are women and belong to the Dalit and other oppressed communities. Despite working for over 20 years, they are not treated as permanent employees and are instead termed as “contract labour”, with the intent to deprive them of their most basic rights. It is no coincidence that the majority of those who are compelled to work as “contract workers” belong to historically oppressed sections of the community, and this is, in fact, the coming together of the neo-liberal agenda of the State and the caste-patriarchy nexus to continue to oppress them.

The low wages paid to workers has resulted in the impoverishment of workers, without any social security benefits or savings. The failure to ensure timely payment of wages results in workers being caught in a web of loans that further impoverish them. Workers, having been denied their wages, are unable to pay the school fees of their children or attend medical emergencies. The State Government has failed to disburse necessary funds to ensure the payment of wages to the workers, resulting in workers being pushed into these dire straits.  The failure to ensure preparation for the second wave of the COVID-19 has resulted in this situation, where workers are not even paid their wages on time.

Under the leadership of Karnataka General Labour Union (affiliated to AICCTU), the workers thus held a protest on 29th October, 2021 demanding immediate disbursal of their wages. They held rallies across the Hospital demanding that the wages be paid. They spoke of the difficulties faced by them, including the harassment faced by the hospital. They are denied of basic amenities like drinking water, toilet, rest-rooms and are treated without respect. The workers vowed that the fight for dignified working conditions, living wages and timely payment of wages shall continue.