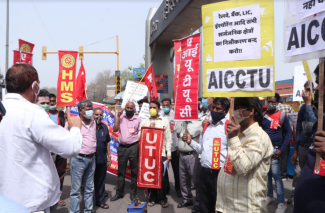 A successful convention of employees from various sectors including railway, education and other government departments was held at Vasundhara Hall of Varanasi zone of Eastern Railway on 13th November 2021. The convention was organised under the initiative of ‘Front against New Pension Scheme (NPS) in Railways’ (henceforth referred as FANPS).

The main speaker of the convention, Amrik Singh, National President of FANPS, said, “We have been protesting against the New Pension Scheme. We have held the historic rally in Ramlila Maidan in Delhi. We will also gather in large numbers at Eco Park, Lucknow on the 21st November.” He remarked that if the New Pension Scheme (NPS) is so good, why don’t the MLAs and MPs implement it for themselves. He added that the railway workers have worked during the peak of the corona wave, risking and sacrificing their lives, to transport essential commodities like oxygen cylinders, medicines, medical equipment and food items to help the country fight against the deadly virus. The same railway workers are being denied security in old age through abolition of the Old Pension Scheme.

Today rampant privatisation of all Public Sector Undertakings is taking place at a faster pace. Rail, SAIL, airports, coal, bank, insurance, ordnance sector, ports and Jal, Jangal, Zamin (water, land, forest) are all being sold out to crony corporates of the ruling regime. He stated that the railways serve more than 2.5 crore commuters every day and is the biggest source of employment for the Indian youth. The same railway is being sold under National Monetisation Pipeline. “The FANPS will continue its struggle against the NPS and for restoration of Old Pension Scheme (OPS) with the strength of different sections of employees and workers from all zones of Indian Railways”, Amrik Singh said.

Comrade Kamal Usri, All India Vice-President of the Indian Railways Employees Federation (IREF) and Propaganda Secretary of the “National Movement to Save Railways” said that the very fact of the location of the convention, which is the parliamentary constituency of the Prim Minister Narendra Modi, in itself will inspire employees of the entire country to raise voice against the NPS. He said that the same Varanasi generated a movement in June 2021 against the anti-worker 100 days action plan declared by the Chairperson of Indian Railways and successfully stalled the action plan. He added, “We draw inspiration from the ongoing farmers struggles at the Delhi borders and join our hands with the students and youth of the country against the attack of rampant privatisation by the union government. It is the responsibility of all sections of Indian society to save railways from destruction in the hands of the private corporate players.”

The convention was addressed by Vijay Singh Bandhu, All India President of the “Movement for Old Pension Scheme”. The convention was chaired by Akhilesh Singh and conducted by Rajendra Pal, all India secretary of FANPS. Rakesh Kumar Pal, Zonal Secretary of Eastern Railway Workers Union delivered the vote of thanks. ν