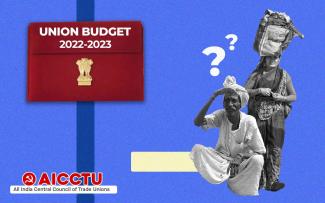 Nothing for the common people, just another way to dig deeper into the pockets of laypeople.

"Poison" for labourers-farmers, "Nectar" for corporates.

With the Modi government's flashy words and misleading talks, central budget 2022-23 is another blow on the hardworking public of the country, facing drastic decline in economy due to unemployment, inflation and loss of income and wages during the corona pandemic. Instead of getting them out of this crisis and suffering, this budget has proven to dig deeper holes in their pockets. When the common people are actually being devastated in this "Vishkal", the Modi government is shamelessly calling it "Amrit Kaal" and mocking millions of victims. This budget must be "nectar" for corporate households and super-rich, for which corporate tax has been continuously reduced to a maximum of 15 percent. Meanwhile, the ongoing privatisation campaigns including railway privatisation has been accelerated. LIC has also been opened for corporate loot.

The widespread sections of farmers-labourers' long-running demands and movements have been rejected in the budget. Frontline workers, including the most suffering unorganized sectors, migrant workers and Asha and other scheme workers' demands have also been completely ignored.

The Modi government, which started with the promise of providing two crore jobs every year, 8 years ago, has destroyed more than 20 crore jobs in the last few years. It is now talking about giving only 60 lakh jobs through 'Gatishakti' scheme, and that too, we don't know till when. This budget, instead of being 'the dream of youth' is a nightmare for millions of unemployed young people. This budget is hardbound to mess with their future.

The promise of doubling the income of farmers in 2022 is far away, the matter of legal guarantee on MSP also is outside the horizon. In reality, the situation is just the opposite in the budget, the MSP has been weakened by reducing the budget allocation.

'Vision budget for the next 25 years', as the Finance Minister addressed it, is about to increase inflation, unemployment, poverty and inequality. On the other hand, corporate loot of the nation's assets and resources is about to accelerate to plunder the country's economy.

The working class and the common people of the country will have to oppose this budget unequivocally.