Rail Workers and the International Scenario 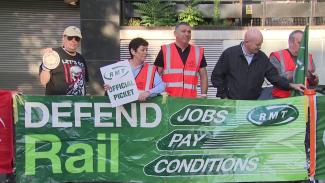 [Presented at the 3rd all India Conference of IREF (Indian Railway Employees Federation), affiliated to AICCTU, at Dhanbad on 11-12 Dec. 2022]

Unlike in the past, the rail workers all over the world are on a path of struggle because of privatisation and implementation of neo-liberal policies. We are witnessing higher degree of turbulence and churning in rail workers movement across the world.

The COVID19 pandemic only exacerbated the crisis in the railway sector, which had been already reeling under the impact of privatisation and neo-liberal policies. The countries like Britain, that once championed the privatisation of railway, modelled after the United States, the country with largest railroad network in the world, are now moving towards reversing their decision and towards nationalisation of the sector as ordinary passengers and railway workers face the brunt of profit oriented policies of the corporate sector. The privatisation of railways in these countries is a living reality for the world to witness the impact of privatisation in a crucial transport sector on lives and livelihood.

The Costlier Rails – The Cheaper Labour

In the US, it is cheaper to travel by flight compared to train and in the UK, the rail fare is more than 30 percent excess compared to other European countries with a public railway sector. On the other hand, the railway workers in these countries continue to face wage stagnation and job losses. BNSF Railway, one of the largest railroad freight networks in North America, owned by billionaire Warren Buffett’s Berkshire Hathaway, reported record profits in 2021, with operating income increasing 13.7% to $8.8bn while reducing the workforce by 20 percent. 12 hour workday for rail workers is becoming a forced reality now. But, the American president Joe Biden and his ‘Presidential Emergency Board’ are only busy protecting the interests of the rail companies rather than discharging their duty of protecting workers. There is an increasing attempt by the railway industry to pass the crisis onto the workers and passengers.

IMF Loan with a Condition for Privatisation of Indian Railways

Meanwhile, post pandemic, globally we are witnessing a new push by the IMF and World Bank to force countries to privatise their crucial transport sector. In June this year, the World Bank approved a $245 million loan to Indian railways to modernise rail freight and logistics infrastructure with the aim for more private investment in the sector. The World Bank document on the loan to Indian railways notes, “A major focus of the project will be on harnessing commercial financing by engaging the private sector and developing customer-oriented approaches.” Across the world, the World Bank, along with it’s Public-Private Infrastructure Advisory Facility (PPIAF) is pushing the new railway privatisation model under the tag of ‘energy efficiency, reduced greenhouse gas emissions’.

Britain witnessed a historic railway strike this year, largest in three decades. Thousands of railway workers in the United Kingdom embarked on a historic national strike on June 21, 23 and 25 against the attempts by Network Rail (that operates and develops most of Britain’s railway infrastructure) and train operating companies to cut thousands of jobs. The union and railway workers are also demanding pay rise, social security and better working conditions as the inflation figures in Britain reached close to 9 percent in April 2022, marking a 40-year high. As prices of food and other household items are increasing rapidly, the RMT (National Union of Rail, Maritime and Transport Workers) is demanding a minimum of 7 percent pay rise and a complete stop on all job cuts by the companies. The railway workers in the UK are preparing for further strike as the Conservative government in the country refuses to negotiate.

In the US, the railway workers are also organising. More than 100,000 rail workers, under the banner 12 major freight service workers’ trade unions, are preparing to embark on strike, first time since 1992. Their demands include better working conditions, more sick pay and more flexible schedules in the aftermath of the pandemic. More than 17,000 workers are employed in the ‘temporary’ route and are denied any written contract. Workers objected to the interference of the Biden government in favour of companies and the prohibition of proposed strike on 16 Sep. 2022 by the Court. The workers said they cannot be denied of their right to strike.

In July 2022, a Ohio based railway workers union also authorised a strike with a huge margin.

In such a backdrop of international situation, in India too, we need to think of integrating rail workers movement with workers and movements of other sectors of transport including road and maritime transports. More importantly, the time is ripe for developing cooperation and solidarity with struggling rail workers and their unions all over the world. IREF shall form a special cell dedicated to the purpose of developing international relations with rail workers movement.

Long live the Solidarity with Struggles of Rail Workers Across the World!