Against Corporatization of Ordnance Factories 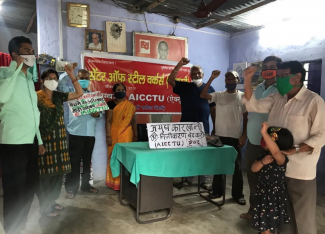 Modi led, pro-corporate, BJP government decided to split Ordnance Factory Board (OFB) into 7 corporations on 16 June 2021, once again attempting to convert pandemic crisis into an opportunity for the corporates.

Some 80,000 workers of 41 ordnance factories tried to stall the government's move to privatise OFB in the guise of corporatization through various forms of struggles, including 5-day long strike action last year. Assurances given by erstwhile Defence ministers were thrown to the wind by the central government. The government took this decision after the Chief Labour Commissioner (Central) [CLC (C)] had given, on 15 June 2021, a failure report of conciliation proceedings while 3 federations representing majority of the workers were absent. This is highly authoritarian and against any industrial democracy.

During the time of pandemic, workers of Ordnance factories have shown their commitment to the by producing and supplying PPEs to save the people and the country, while profit hungry corporates are using the situation for loot to increase their wealth manifold.

AICCTU strongly opposes the move of the government to privatise OFB by splitting it into 7 corporations and calls upon Indian working class and the people of the country to foil the move tooth and nail.

When Modi government is on the privatisation spree of all national assets including Railways and all PSUs, AICCTU calls upon all sections of workers to fight back in unison. AICCTU will always remain in the forefront in solidarity with Ordnance factory workers in their struggle against corporatization and privatisation. π

Calls For United Resistance of the Working Class

This draconian ordinance is aimed at prohibiting the indefinite strike, wef, July 26, called by all the Defence Central Federations, under the banner of Joint Action Forum Of Defence Federations including AIDEF - INDWF – BPWS -NPDEF - AIBDEF – CADRA, to oppose the decision of the Central Government to corporatise the Defence factories of the country. Under the pretext "to provide for the maintenance of essential defence services so as to secure the security of nation and the life and property of people at large", the Ordinance has come into force "at once".

Such was the urgency of this Ordinance!

The ordinance not only prohibited strikes, but all forms of protest and extended the definition of the strike beyond even the IR Code's Clause 2 (zk), which immediately received the President’s assent. The Ordinance defined strike not only as "cessation of work" but also “go-slow, sit down, stay in, token strike or mass casual leave." Even, "refusal to work overtime, any other conduct which is likely to result in.... cessation or retardation or disruption of work in the essential defence services” ' have been brought under the ambit of "illegal strike". Sweeping powers have been given to the police force to break the strike, and the Clause 11 has given licence to the police officers to "arrest, without warrant, any person who is reasonably suspected to have committed any offence under this Ordinance."

Further, this draconian ordinance has provided complete immunity to the officers. The Clause 15 says, "No suit, prosecution or other legal proceedings shall lie against the Central Government or any Officer" for implementing this Ordinance.

This Pro-corporate, anti- worker ordinance of Modi government is reminiscent of Hitler's Nazi policies. This ordinance has been brought with a clear motive of building a military industrial complex in the country.

Demolishing democratic rights enshrined in the Constitution is one of the most naked acts of the Modi's fascist rule, which should be unitedly opposed and resisted by the working-class movement of the country.

AICCTU Calls upon defence workers to rise in unison and wage militant struggles.

AICCTU held solidarity action programmes in various states on 19 June in support of the call by federations of Defence Employees to hold Protest Day against the decision of corporatization of ordnance factories by Modi Government The call was fully supported by the platform of central trade unions.