Crores Out of Work: The Story of Unprecedented Unemployment Crisis in India 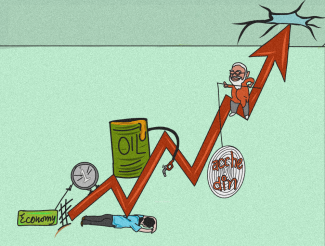 The lethal second wave of COVID has devastated the country's job market to unimaginable proportions. Centre for Monitoring Indian Economy (CMIE) has published data exposing the horrific reality of joblessness during the ongoing pandemic and recorded a loss of one crore employment, one of the steepest falls during the last four months!

But it would be wrong to attribute this present employment crisis entirely to COVID situation. NSSO data had revealed that unemployment rate reached a 45 years peak at 6.1 percent in 2017-18. This was the first survey on employment conducted by a government agency after the disastrous demonetisation was implemented by Modi government. Demonetisation hugely shattered the informal economy of the country. Millions of jobs were lost. It brought the economy to a grinding halt. Renowned economist Jean Dreze commented that demonetisation was like firing bullet on the tyre of a speeding car! After demonetisation, GST was implemented and thus the economy entered a vicious cycle of stagflation. The lockdown has only exacerbated this crisis.

Joblessness and hunger spread faster than the virus in the first phase of the lockdown. Lakhs of jobs lost in the first phase never appeared again. Those who were re-employed, found themselves in more precarious situation than before. The informalisation of jobs was huge and unprecedented. To quote the The State of Working India Report by Azim Premji University, "workers came back into more precarious and informal employment. Nearly, half of formal salaried workers moved into informal work, either as self-employed (30%) , casual wage (10%) or informal salaried (9%) workers between 2019 - 2020." And then came the second wave and lockdown of 2021. Those left in salaried employment faced the blow on their livelihood harder than last year. CMIE observes, “when the impact of second wave was felt, around 28.4 lakh salaried jobs were lost in the rural areas and 5.6 lakhs in cities.”

There has been a significant shift of workforce to agriculture due to the stress produced by the ill planned lockdown. Reports reveal an increase of nine million jobs in agriculture after the first lockdown was imposed. This huge shift from non-farm to the farm sector is certainly expected to produce unimaginable stress on the already crisis ridden Indian agriculture.

Among non-farm sectors, MSMEs that provided over 11 crore employment and contributed a third of India's GDP were worst affected, according to a recent article published in Economic and Political Weekly. In May 2020, production dropped drastically from an average of 75 percent of capacity to just 13 percent in the sector. On an average, these firms retained only 44 percent of their workforce in the lockdown, and 69 percent of firms reported inability to survive longer than three months (Impact of COVID - 19 on MSME's, Udayan Rathore and Shantanu Khanna, EPW, 14 June, 2021).

Construction sector also bled profusely in the lockdown. According to CMIE data, this low paid informal sector shed 88 lakh workers out of job during April May, 2020. Worst sufferers were daily wage workers, with over 1.72 crore losing their jobs and income.

Others badly affected industries include manufacturing, hospitality and trade. The job losses in these sectors were 42 lakh, 40 lakh and 30 lakhs respectively. It is to be noted that during the 2nd lockdown (or restrictions as termed by different state govts), most manufacturing sectors were exempted from restrictions and some were operative, albeit with reduced manpower. But, there are reports that employers took recourse to termination and wage cut where reduced workforce was permitted. In many states, contractual workers like school teachers have not received their wages for April - May. CMIE data reveals that between January and May 2021, 2.5 crores of existing jobs have been lost, and the bulk of these losses, about 2.2 crore, was lost during April and May when the second brutal wave of COVID engulfed the country.

Development economist Jean Drez had warned, “India might be heading towards a serious livelihood crisis, and the situation seems to be the worst this time for the working class." He further added, "compared with last year, many people have depleted savings and larger debts".

In spite of repeated advice from all quarters, the Modi government has stubbornly denied to transfer cash to the most vulnerable sections of the population, and on the contrary, imposed GST on mask, sanitizers, and even upon the electrical furnaces of crematorium. Far from bidding a respectful tribute to the departed, Modi is extracting tax even at the time of final farewell of the human beings. This brazenness, this cruelty, this shylockian mentality is unparalleled in the world. π