The Politics of Vaccination 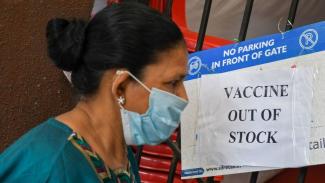 On 21st June, 2021, the Minister for Health tweeted that India had administered the highest ever single day coverage across the world, with 86.16 lakh on that day.

This is one more in the series of tall claims made by the Government that are mere manipulation of facts and numbers with little actual impact on the ground.

However, data showed that the record of 86 lakh vaccinations was, in fact, engineered by slowing down vaccinations in Bharatiya Janata Party-ruled states in the run-up to Monday. There have also been allegations that vaccines were hoarded to ensure a big spike . For instance , Madhya Pradesh recorded 16.9 lakh doses as administered on 21st June, but had initiated a slowdown from June, 17th itself - 338,847 vaccine doses were delivered on June 16, the next four days showed a steeply declining trend: 124,226 doses on June 17, 14,862 doses on June 18, 22,006 doses on June 19, and just 692 doses of the vaccine on June 20. Nationwide, the next day saw a dip in vaccination, with total vaccinations of only 54.22 lakhs on June 22.

From the completely unplanned lockdown that was imposed by the Central Government from 24th March, last year, 2020, to its complete unpreparedness for the second wave, it has acted in a manner that is not only criminally negligent, but also downright cruel and unscientific.

Here, we will look at the vaccine policy of the Government that has undergone several flip-flops. By allowing private profiteering it has failed to ensure universal immunization.

There are various concerns in regard to the issue of vaccination, all of which cannot be covered in one article. Here we will look at three intertwined threads that would help us understand the failure of the government:

i. Improper planning leading to inadequate procurement for internal use coupled with unplanned export.

ii. A distribution process that exacerbated inequality by insisting on vaccine access only to those with technology access.

iii. A neo-liberal pricing policy that did not allow universal vaccination created an environment which deprived the most vulnerable population of vaccination.

Procurement failure – too little too late!

The detection of the COVID-19 virus resulted in steps being taken across the world to come up with a vaccine for the same. India is home to one of the largest manufacturers of vaccines in the world, Serum Institute of India (SII). As early as June 2020, SII had entered into a licencing agreement with Astra Zeneca to supply one Billion doses of the Oxford vaccine to middle and low-income countries. Further, India’s indigenous vaccine, Covaxin from Bharat Biotech was given emergency approval by the DCGI on 02.01.2021

The Government set aside Rs. 35,000 crores for vaccine package. With this budget, at the rate of Rs. 350 a person (the centre pays Rs 150 per dose both for Covishield and Covaxin), 100 crore people could have been vaccinated.  However, this has not happened.

One of the main reasons for this failure is that the Central government did not place adequate orders in advance.

In August 2020, the Prime Minister declared that India had worked out a vaccine distribution plan. However, the first vaccine order was made as late as January 2021, and by the time India’s first phase of vaccination rolled out on Jan. 16, the government had bought just 11 million doses of Covishield and 5.5 million from Covaxin.

At the end of February, the government placed another order of 21 million doses with Serum Institute, and another order of 110 million doses in March when infections started to rise. Given the large population of our country, these orders are extremely minuscule. The total vaccine order, as at the end of March, was approximately 160 million doses. This was sufficient to fully vaccinate only 8 crore people out of a total population of 140 crores. In comparison, by January, 2021, Canada, the UK and Chile had procured enough supplies to give each person at least four doses.

In an attempt to build his global image, the Prime Minister Mr Modi made tall claims about having exported vaccines, saving the rest of the world, while sacrificing the people of India. By the Government’s own claims, a total of 6.6 crore vaccine doses were sent to 95 countries – it had exported more than it had administered to its own people.

Thus, while on the one hand, sufficient vaccines had not been ordered, on the other hand, a large number was being exported fully conscious of the fact that the people of India had not been vaccinated. This cannot be viewed as merely lack of planning, but active callousness.

The Digital Divide and Inequitable Distribution

Initially, the Central Government set up a highly exclusionary condition that required registration on the COWIN App for entitlement to vaccination. In a country where only 23.8% of Indian households have access to the internet, such a policy is highly exclusionary and inequitable and resulted in the exclusion of the most vulnerable and downtrodden sections of society, including the working class, those residing in rural areas and those belonging to the Scheduled caste and Scheduled tribes and women.

The Government instead of making sure that all persons have free and equal access to vaccination, showed its elite nature in its affidavit filed before the Supreme Court where it claimed that those who do not have access to digital resources can take help from family, friends and NGOs. It was only after the order of the Supreme Court, that this was revisited. However, the urban rural divide remains and a resident of urban India is likely to receive a vaccine 1.8 times more than someone living in the rural areas.

Pricing Strategy is an attack on equity

The effectiveness of vaccination lies in universalization and the failure to ensure that everyone is vaccinated would place at risk, not only those who haven’t been vaccinated, but also those who have been. The pandemic would remain forever as Herd Immunity would not be achieved.

India’s vaccination policy initially started with the Central Government procuring all the vaccines and supplying them at free of cost to the State who, in turn, would disburse them. Government Health Facilities were to provide them at free of cost, and Private Facilities were not to charge more than Rs. 250 per person per dose. However, this changed completely with a “Liberalized Pricing and Accelerated National COVID-19 Vaccination Strategy” brought out on 21st April.

As per the same, the Central Government would only purchase 50% of the vaccine manufactured. The remaining vaccines could be sold by the manufacturers – 25% to the State Governments (at a higher rate) and 25% to the private sector. There were also no clear principles laid down as to how the Central Government would allocate vaccines to State/ UT’s. This policy which forced state governments to compete with each other, other countries and private players came under heavy criticism. There was no price limitation placed on how much private players could charge, leading to tie-ups with 5-Star hotels for “Vaccine Packages”, highlighting its vulgarity. The Supreme Court in its order dated 30.04.2021, found that the new policy was not consistent with the right to life and the right to health under Article 21 which would affect the under privileged and marginalized groups. Further in its order dated 31.05.2021, it found that the policy was prima facie, arbitrary and irrational and directed the Government to revisit the said policy.

It was only after this order that the Prime Minister announced on 7th June a shift in the policy, which came into effect from 21st June - 75% of the vaccines would be procured by the Central Government and allotted to the States. It also announced that vaccination would be available for all those above the age of 18 years.

However, this too remain inadequate. 25% of the vaccines remain open for private players, and there is no explanation as to why 100% purchase could not have been resorted to by the Central Government. There is also no information forthcoming on when and from where the vaccines would be procured.

Universal vaccination also requires that we look at compulsory licensing - this would allow more manufacturers to produce the vaccine. In its affidavit before the Supreme Court, the Government states that “Both manufacturers… have taken financial risk in developing and manufacturing these vaccines” and that decisions on pricing must take place through negotiations, “keeping statutory provisions as a last resort”. The lives of people are being sacrificed to safeguard the “financial risk” (the profit motive) that has apparently been taken by the manufacturers. One should not forget that Covaxin has been developed under public private partnership between Indian Council of Medical Research (ICMR) and Bharat Biotech International Ltd., despite which the Government is refusing to look at compulsory licencing.

As of 8.45 p.m. on June 19, 16.3% of the country’s population has received one dose and only 3.6% are fully vaccinated. Reports predict a third wave and the new COVID Delta Plus variant is also a matter of concern. Vaccination plays an important role in countering the same.

The Government with its pro-corporate, elite and inequitable policies continues to deprive people of vaccination in violation of our fundamental right to health. π