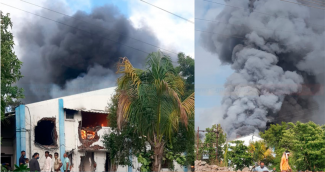 On the 7th June 2021, fire broke out in a chemical factory situated in the village Urawade on the way to the infamous “Lavasa” city, constructed on the usurped lands with active political support of the neo liberal ruling classes and the land mafia in Maharashtra. This fire consumed 15 female and 2 male workers, out of 37 working in a 12 hours shift from 7 am to 7 pm. It became difficult even to identify each of them as the charred remains necessitated DNA tests. They were all from rural families around the factory.

Agriculture in the area was slowly converted by coercive ‘land sale’ into a hub for 700- 800 companies mostly MNCs, Indian and SMEs, tapping in to the swelling ranks of “reserve army of labour”. This is the infamous “Mulshi Pattern” of Maharashtra! (The land mafia with kilos of gold on their bodies operate in the region with impunity, obviously under political patronage, with (7/12?) extracts of the small and marginal farmers in their pockets. And the lands are to be sold for real estate or for industry/ private industrial estates.)

Maharashtra had laid down a policy to acquire, develop and handover the plots to the corporates, with built- in infrastructure. This work was carried out through Maharashtra Industrial Development Corporation (MIDC). Farmers’ lands were acquired by MIDC at meagre prices and then leased out to Industries. MIDC was an agent, a facilitator for the corporate, shielding them from the anger of the farmers.

As the neo liberal reforms rolled in, slowly the role of the MIDC was made to shrink and the leaders of the ruling classes in Maharashtra like Sharad Pawar started openly advocating for abandoning agriculture and pushing the corporates to buy Agricultural lands directly. Such industries on private lands follow very few regulations. Lavasa city, privately owned and privately operated, came up as one example of this nexus in the neo liberal reforms. This is commonly called the MULSHI pattern.

SVS Aqua Technologies was incorporated in 2012 to manufacture water purifier tablets from chlorine. Its website informs that it employs 51-100 workers. The turnover is reported to be between 100- 500 crores with exports to various countries like the USA, S. Africa, Turkey, Australia, and Sweden. It was given ISO 9001: 2015 certification as well. The factory was constructed as a structure suitable for a warehouse with almost no ventilation, only one door for access, no fire- fighting equipment or proper segregation of areas for storage, production and packing in 2016. The production activities started in 2016. But, it was registered as a factory in December 2020, given official permission to operate for production of Chloroquine by Maharashtra Pollution Control Board. The factory was registered under PF as well as ESIC in May 2021 and please note the first installments were paid only in June 2021 after the accident. Only 12 out of the 17 workers who died and 4 injured workers are reported to be covered under ESIS. About 5 months back the company started packing sanitizer in the same building, without any permission, violating all norms. No inspections of any kind seem to have been carried out from 2016 to 2021.  Under the guise of Ease of doing business the then state government under BJP/Shivsena followed footsteps of the BJP government and waived off all compliances. In fact, the first official to reach that factory ever was the fire -fighting official who came to supervise the dousing of the fire. Hence, it is obvious that there was a political and official patronage as well.

About 700 to 800 establishments in different types of industry sectors and sizes, from MSME to large ones - both domestic and MNCs- have sprung up in recent decades. These are constructed without any respect to building norms or any fire fighting facilities. Fire fighting arrangement and access to the factory were so inadequate that the fire continued to simmer even on the 8th morning. All these industries engage a major chunk of workers on contract. The contractors are politically well-connected, and hand in glove with managements having clout with the state machinery. Sources in the trade union movement in Pune say that such incidents, smaller in scale, are a regular occurrence in the entire PMC, PCMC and PMRDA areas. Surely these are no exceptions and must be a state-wide phenomenon.

In the recent past several such fires and loss of precious human lives have taken place at different places of work across Maharashtra mainly in chemical zone factories. Similar fires have engulfed several Corona facilities and hospitals also. The neo liberal thought and the resultant change in the mind set has gripped the state, its machinery and the ruling class in complete favour of the corporates. Thus these inspections are already being done away with even before the New Labour Codes got operationalized. One shudders to think what is in store for the working class in general and the unorganized contractual workers, men and women in particular, once these codes are let loose.

We demand prosecution of the guilty responsible for the fire, a compensation of one crore to each family, job to dependents, strict compliance of safety standards and severe punishment to erring companies. The nexus of contractors, land mafia, industrialists and the politicians shall also be exposed.

What comes out is the need to educate the working class and prepare it to challenge the neo liberal narrative in the form of the “Mulshi Pattern” while resolutely challenging the fascist regime’s onslaught on the working class in particular by way of the labour codes and on the masses in general. This regime bases itself on the neo liberal narrative and also on the “Gujarat Pattern ''. The interlink needs to be understood and smashed for a safe and non hazardous work life.

From the FB post of Mr. Vidyadhar Date dated 8th June, a veteran Journalist committed to the cause of the working class and the rural/ urban poor.

“In Justice, Nature, and the Geography of Difference, David Harvey discusses the September 1991 ﬁre at the Imperial Foods chicken processing plant in Hamlet, North Carolina, which claimed the lives of twenty-ﬁve workers and injured ﬁfty-six more. Harvey notes that the growth of rural industries in the United States has swollen the numbers of factories attempting to take advantage of a “relatively isolated industrial reserve army” left behind by the decline of agricultural employment.  He suggests that this expansion of industrial capital into rural areas is part of a broader historical tendency of capital to seek out lower wage locations and non-union workforces, thus undermining the ability of larger groups of workers in core industrial areas to place regulatory constraints on the accumulation process.

Shivaji Only in Lips, Not in Deeds

Historically the region where this pattern is being played out is called MAVAL. The region was the mainstay of the peoples’ king Shivaji’s army. The soldiers were called MAVALE. Legend has it that he played the role of a protector of farmers and women in particular. He ordered: not even a blade of grass of the Ryot should be touched. He cut the hands of a village chieftain in the region when he harassed a woman from a farming community. And look at what the rulers of the present who invoke Shivaji’s name in every alternate sentence are doing to the men and women of the Ryot, how they facilitate the loot under their patronage.