The Sinking Economy and The Zooming Wealth 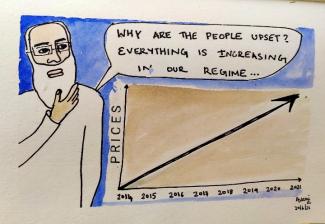 Latest data on Indian Economy released by the government shows that the economy has shrunk for the entire financial year of 2020-21. This is the first full year contraction of the economy in last four decades. While the pandemic and lockdown can be cited as a reason for the contraction, the fall is greater than similarly placed emerging economies in the world. This makes the contraction more worrisome. The Pandemic induced lockdown has certainly pushed the economy downwards, but the pro-corporate policies of the ruling regime has only worsened the situation. The economic burden of the lockdown is thrown on to the common people while relatively richer and corporate masters are favoured through policy measures.

The economy, as per the latest numbers, has contracted by 7.3 % in the financial year 2020-21.  If we take the economic data of 2020 for the BRIC countries into account, Indian economy contracted much more than other countries in the bloc- Brazil, Russia and China. IMF’s World Economic Outlook (WEO) released in April 2021 noted that the global economy contracted by 3.3 percent owing to the impact of the deadly pandemic in 2020 while Indian economy contracted by 8 percent. India performed much worse than what the world averaged during the pandemic year. Let us have a look at how India managed to perform one of the worst in the world in the Pandemic year.

Modi govt relied on stringent and ill planned lockdown as a measure to control the spread of Covid. The lockdown had its impact in collapsing the economy. But the declared motive to control the spread of the virus was never achieved due to the government’s failure to make necessary arrangements to expand health infrastructure. The vulnerable sections of the population were hit hardest by the lockdown. But the ruling regime absolutely failed in ensuring food security and economic relief to them. India ended up facing worst effects on both fronts – the economy shrunk at a rapid pace while Covid spread too continued unabated.

Not Because of Pandemic Alone!

Indian economy was already facing a severe crisis in the preceding years of the pandemic. The Modi’s government policies of demonetisation and GST created a devastating impact. The Pandemic has only facilitated the devastation of the economy that was already sinking.

The economic growth for the FY 2019-20 (the year before the pandemic) was merely 4% while the downward trend began in 2016-17 itself, which was the year of demonetization. The growth rate of Indian economy fell from 8.3% to 6.5% in three preceding years itself, well before 2019-20 when it reached a record low of 4%.

The unemployment rate as per government data in 2018-19, two years before covid pandemic, was around 6%. This was the highest in the last 45 years. The value of Rupee continuously on a decline under Modi regime from Rs 59 against US dollar in 2014 to Rs 73 against US dollar now. Interestingly, export growth has also flattened during the same time defying all economic rationale. Under the Modi 1.0 regime, exports grew merely by 12.61% in contrast to a much higher growth number of 69% in the preceding five years.

The Modi government has only been busy fudging economic data and window dressing to make growth numbers impressive, rather than adopting sound policy measures to ensure economic boost and well-being of the citizens.

A 20 Lakh Crore relief package was announced with much fanfare by the Prime Minister Narendra Modi and the Finance Minister Nirmala Sitharaman in 2020 to deal with the crisis induced by the lockdown. It took five press conferences for Nirmala Sitharaman to present the package. While in reality, it was nothing but an eyewash as the real increase from pre-existing govt expenditure was less than 10% of the total package. Only a meagre amount was allocated for temporary cash transfers and for increased ration to people. Rest of the announcements were in the form of expansion of credit along with policy decisions to push through privatization. The whole approach became clear when the govt utilized the lockdown to push anti-worker labour codes, anti-farmer agricultural bills and enlisting PSUs and PSBs for eventual privatization. The failure of the much-hyped relief package of 2020 to handle the crisis emanated from lockdown was so obvious that not even an attempt was made for any such relief during Lockdown in 2021.

Indian economy has traditionally been driven by private final consumption expenditure and household savings. With economy already shrinking before pandemic and lockdown only pushing it further down, what was needed was to tax the rich and spend on increasing public expenditure on welfare schemes and public employment programs, especially in rural areas, to maintain and boost aggregate demand. The government failed to do it and the economic performance worsened still.

The lockdown and the resultant loss of livelihood devastated the working class, daily wage earners, migrant labourers, contractual labourers, household workers and all of unorganised and self-employed workers.  While the ordinary workers, farmers and toiling masses continue to suffer, the govt remained hell-bent on pushing through outright privatization, farm bills and labour codes. The message sent out to the ‘market’ was loud and clear. When the economy was, actually, in huge recession, BSE Sensex zoomed 66 percent in FY 2020-21, as if to celebrate the pain of ordinary Indians! This is when Centre for Monitoring Indian Economy (CMIE) study observed that 97 percent of Indians felt their situation to be much worse this year incomparable to any time before the pandemic.

Inflation too skyrocketed in May, 2021 making things further difficult for ordinary people. Retail inflation breached 6% limit. Food inflation also crossed 5%, especially with the increase of food oil prices. Price of petrol and diesel has already crossed Rs 100 per litre in many states. Modi govt has been milking petrol and diesel as a source of tax revenue while continuously reducing taxes on corporates. It is obvious when we look at the components of petrol price fixed by BPCL in Delhi as of June 16, 2021. It is amply clear that the tax burden is being imposed on people by the government.

Similar is the case with the Diesel. The petrol pumps can easily be renamed as ‘Tax Vasuli Kendra’ (Tax Collection Centres) since ordinary Indians pay more for taxes on Petrol and Diesel than their actual base price.

When Modi government came to power at the centre in 2014, the petrol was priced at Rs 71 and Diesel at around Rs 57 in Delhi. At that time, the crude oil basket of India was priced around $ 109/barrel. Presently it is hovering only at around $ 67. When the price of crude oil tumbled down in 2020 due to lockdown world over, the Modi Govt did not pass on the price benefits to customers but increased the excise duty on petrol and diesel by Rs 13 and Rs 16 respectively and increased the pain and suffering of the common people, even amidst the pandemic.

The need of the hour is to revive the economy by boosting aggregate demand. This can only be done by increasing purchasing power of the people, by increasing public expenditure and investment and by slashing down exorbitant taxes on essentials like petrol, diesel and food prices. If the government is concerned about the plight of ordinary Indians, it should have taken steps to reduce income inequality and disparity by taxing the super-rich and allowing money to circulate in the hands of the common people. But the harsh reality is that even in year of pandemic, even when majority of Indians suffered loss of earnings and livelihood, the cronies of Modi government, like Adanis and Ambanis saw a spectacular increase in their wealth.