Violation of Labour Rights in Qatar 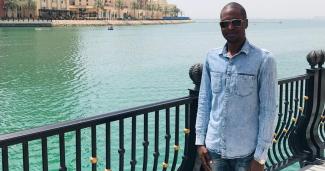 Ahead of Qatar’s 2022 FIFA World Cup, various incidents of gross violation of labour rights and silencing of labour right activists have come to the fore. On May 5, 28-year-old Malcolm Bidali, a Kenyan national working in Qatar as a security guard was arrested for exposing the labour rights violations. Bidali Noah, writing under a pseudonym, spoke about long working hours, lack of proper wages, inhuman working conditions and accommodations. He was later charged by Qatari authorities with “offences related to payments received by a foreign agent for the creation and distribution of disinformation within the State of Qatar.”

Since, Qatar was awarded the hosting of FIFA world cup in 2010, an alarming number of 6,500 migrant labourers from five countries in South Asia have died (both work and non-work related incidents), including around 2711 from India. Among them, 37 deaths are reported be directly linked to construction of World Cup stadiums.

Qatar’s inhuman labour conditions have been in spotlight since long, especially its treatment of 2 million migrant workforce (about 95 percent of its total labour force) mostly from Asia and Africa. Though in 2017, Qatar in an agreement with International Labour Organization (ILO) agreed to reform its archaic labour laws, including the abolition of exploitative Kafala system. But labour groups point out that little has been achieved to end the rampant labour exploitation and Kafala system. The Kafala system, or sponsorship system where in an in-country sponsor, usually their employer, is responsible for their visa and legal status. The system is a form of modern slavery, where the sponsor-employers, in many cases, take away workers’ passport. Also, under Kafala, employers permission is needed for changing jobs or leaving the country. The confiscation of passport further leaves the workers at the mercy of the employers and any form of struggle for better working condition and wages in Qatar attracts severe retaliation from both the employers and authorities.

Trade unions rights are severely curtailed in Qatar under which foreign migrant workers, domestic and agricultural workers are prohibited from forming unions or participating in strike activities. For long period of time, since 1957, union activities were outlawed in Qatar and were partially restored only in 2004. Despite the threats and ban on strike, in 2019, thousands of foreign workers at two construction companies organised a strike and successfully managed to secure their demands of payment of unpaid wages.

Apart from issues of unpaid wages and inhuman working condition, in most cases, foreign workers are forced to take loan for payment of recruitment fees, pushing workers into debt. Though such recruitment fees are prohibited under Qatari laws, recruitment agencies exploit leal loopholes to exploit the workers by charging large amount of money.

Qatar has also around 173,000 migrant domestic workers, who face severe exploitation in the country. Many face both mental and physical abuse, including sexual violence from the employers. Despite the enactment of Domestic Workers Law in 2017, there had been no respite in the conditions of domestic workers and the Qatar government continue to refuse to accord full working-class status to these domestic workers. π