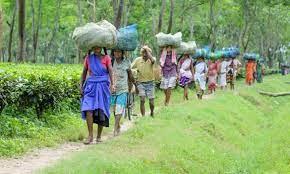 The battleground is all set to launch a protracted movement in Bengal tea sector. Tea workers, both the daily wagers and the employees together have been raging for the last 7 years with the demand to implement Minimum Wages for the first time in more than 150 years old tea gardens in North Bengal. Compelled by a long series of massive mass demonstrations before the respective government and employers’ offices in the hills and the plains of North Bengal, the state labour directorate had to mediate with both the employers and the workers to arrive at a promising tripartite wage agreement way back in February 2015. That very agreement held a mandate for ensuring a temporarily raised wage with retrospective effect from April 2014 and the promise made by the labour department to implement MW in the scheduled employment in the next 6 months’ time. To that end a Minimum Wages Advisory Committee (MWAC) was formed comprising of 9 representatives each from the operating trade unions, employers and the labour directorate for formulating the Minimum Rates of Wages and Salaries through a designated Gazette notification. But to the extreme detriment of the workers conditions, that pledge has remained a chimera.

Meanwhile, in a long span of the last 7 years, the West Bengal state government had rolled out a number of interim, yet nominal increases in wages in a unilateral, arbitrary and discriminating way. Measuring out such a minimal placatory relief has actually paved the way to a disorderly state of affairs. In absence of a scheduled revision of salaries, the staff and sub-staff employees have been losing a substantial portion of their pay packet as their monthly increment of salary is stalled.

In view of this stand-off situation necessitated by the stubbornness of the employers, at the behest of the Labour department, both the Joint Forum of almost all the operating tea unions and the Joint Committee of the staff and sub-staff associations had agreed to arrive at a temporary truce for a substantial raise in wages and salaries, subject to a firm commitment of implementing MW within a stipulated short timeline. The parleys continued even during two recently concluded tripartite meetings at Siliguri in February and June last. At the 2nd June meeting, the state labour secretary had promised to settle the issue within the next 10 days during the forthcoming tripartite meeting in the very presence of the honourable Labour Minister of West Bengal.

Like a bolt from the blue, the Honourable Chief minister of West Bengal Smt. Mamata Banerjee, notwithstanding the ongoing 3-pronged negotiations, ordained a flat 15% hike in both wages and salaries on 9 June while participating in a TMC organized tribal mass-marriage programme in one of the Dooars tea gardens. A hasty notification to this end was issued by the labour secretary on 14 June.  Such abrupt declaration at once derailed the formal negotiations regarding fixation of MW for the 4.5 lakh tea workers of Terai-Dooars-Darjeeling hills of North Bengal as well as demeaned the labour directorate in violation of established norms. The tea workers took it as an assault on their dignity and rights. Even the 18-rounds of meeting of MWAC and 4-rounds of meeting of the sub-committee formed thereafter to the purported purpose of expediting the promulgation of MW suddenly came to naught.

This most recent notification along with the earlier notifications on interim wage increases failed to enhance the other linked corresponding component of wages and salaries like Extra Leaf Price (ELP), Additional Compensation of payoff posts, rates of yearly increment along with Basic Pay, finalization of identical retirement age of 60 years etc.

Quite understandably, this most recent notification has sent out a negative impulse among all sections of the tea workers. The Joint Committee immediately gave a call of striking work for an indefinite period demanding resumption of the disrupted tripartite from 4 July onwards. Seeing red the labour commissioner of the state urged the Additional Labour Commissioner posted in North Bengal to restrain the staff and sub-staff of the industry during this high plucking season. Failing in this placatory effort to convince the roiled workmen, the Labour Minister has made his department fix the next tripartite in his presence on the 4th itself.

The stage for the battle is now all set. It may prove decisive to break the resistance of both the capitulating labour ministry and the notorious employers in accepting the MW wage and the salary structure to be implemented in line with Tamil Nadu, Karnataka and Kerala.