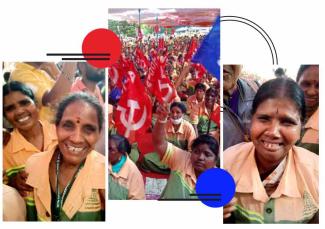 In a historic victory to the sanitation workers across Karnataka, the BJP-led government at the State has agreed to make their jobs permanent, among other demands. After a four-day long strike held in 31 districts, including sweepers, auto drivers, helpers, loaders, UGD workers, who were working under the direct-payment system, sham contract, daily wagers, among other artificially distinguished workers, will be made permanent. The workers, as a part of their strike, refused to collect or dispose off the garbage over these four days, which brought the government to its knees. The unity of all sanitation workers of the state and their unions was another major reason.

The BBMP Powrakarmikara Sangha, Karnataka Pragatipara Powrakarmikara Sangha (both affiliated to AICCTU) and other unions of sanitation workers across Karnataka jointly organised this indefinite strike from July 1st, with a single point agenda of seeking permanent jobs. The workers who have been relentlessly fighting for their dignity and rights through decades of their service, and who were risking their lives for the lives of the public during COVID-19 crisis, have won a hard-fought battle today. A majority of these workers belong to the Dalit community and are predominantly women, thus making this victory more significant!

"This is a dream come true. We have been working since the time our wages was Rs. 400. Our Union has been able to achieve this today, because of our consistent efforts to unionise the women," said Com. Rathnamma, the general secretary of the BBMP Powrakarmikara Sangha.

Com. Gangamma, the vice president of the union, said that the Chief Minister saw them sweeping the roads every single day in front of his house. "But it took our massive collective efforts for him to notice we exist and we will demand for our rights," she said.

In 2017, when the workers waged a similar struggle for the abolition of contract system, the State Government, led by the Congress then, had brought only the sweepers under the direct-payment system, whereas those workers engaged in garbage collection and transport continued to be exploited under the illegal contract system. Since then, the workers have been demanding that their jobs be made permanent, so that they are able to have job security, wage security, social security, among other benefits accrued to a permanent worker.

On Monday, 4th July 2022, the Karnataka Government finally gave in to the demands of the workers and agreed to make their jobs permanent after setting up a committee which will include representatives of powrakarmika (sanitation workers) unions, which will come up with the rules for their appointment. The committee will also look into implementation of ‘equal pay for equal work’ for the workers. To enable the implementation of the committee’s recommendations, the legislative assembly will propose a special law in its upcoming session. The government has also agreed to bring auto drivers, helpers and loaders under the direct-payment system in all other districts of Karnataka in a phased manner, except for those workers in Bruhat Bengaluru Mahanagara Palike (BBMP), who will continue to remain under the exploitative sham contract system. Our Union, AICCTU, will continue to fight against such illegal and exploitative contract system and will continue to strive towards ensuring rights and dignity for all.

The government has also agreed to implement IPD Salappa report in terms of the population to sanitation workers ratio (500:1), as also provide scholarships for children of powrakarmikas, implement a housing scheme, maternity benefits, among other service benefits.

The BBMP Powrakarmikara Sangha and Karnataka Pragatipara Powrakarmikara Sangha, affiliated to AICCTU, have consistently undertaken struggles seeking permanency of jobs, better working conditions and dignity of work for Powrakarmikas. The workers have constantly fought against caste oppression and sexual assaults, and will continue to fight for dignity, equality and justice.