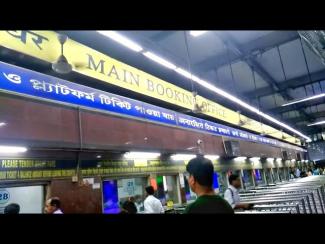 A tender for handing over 64 Ticket Booking Counters to Private agents over Kharagpur Division in South Eastern Railway was floated on 20.4.2022 as per the Railway Board's guidelines. This was done with the ulterior motive of privatising the whole commercial activities of Railways - right from ticket reservation to small parcels/luggage booking- through IRCTC as it was done in catering services. This unwarranted move has been implemented with the sole motive of facilitating profit seeking by private companies at the cost of permanent and dignified jobs in the railways. Practically this scheme is intended to finish off Railway's social service obligations maintained so far.

When the affiliated unions of recognised federations like NFIR/ AIRF were silent on this issue of outsourcing, SERMZU took up the issue seriously and started a campaign from station to station and exposed the larger conspiracy. Thousands of leaflets were distributed, exposing and explaining the implications and adverse impact on Rail-workers and the travelling public. Along with this, a Mass Signature Campaign enlisting 2,015 signatures from the employees and Rail-Users were also organised during the period. The Campaign started on 11th June at Andul Station through a meeting addressed to the employees and the travelling public. The mass signature campaign and leafleting received a tremendous response from the employees and the people. A mass meeting was held at Midnapur Station premises where district AICCTU leaders along with a large number of municipal workers participated. The campaign was organised at 25 stations, which ended in a Mass gathering on 25th June at Santragachi with a participation of a good number of running and commercial staff as well as contract workers of the Railways. The next day signatures collected from different stations were submitted to the DRM, Kharagpur.

Huge Job Creation through Outsourcing/Contractualisation is a Myth

Initially, the Railways started outsourcing of perennial jobs, not directly linked with train operations, such as cleaning, house-keeping, maintenance of CCTV Cameras, display board, etc, terming them non-core activities. Now, core activities like ticket /reservation booking, electrical & mechanical maintenance work connected to running of train are being outsourced. Consequently, 50% of existing vacancies are surrendered by the Railway Ministry with an abolition of 80,000 posts in 2020-22. To justify such random outsourcing, the Modi government, through its well-oiled propaganda machinery, is constructing a myth that huge jobs will be created in Railways. Let us check the veracity of their claims through the present case in hand. Contractualisation of Station Booking Agent (STBA) for selling unreserved tickets is sure to reduce the scope of employment. In place of 200 posts of commercial clerks, termed as ‘surplus’, a small number of contract employees will be recruited with 12 hour work and with 6,000 to 8,000 monthly pay. Let alone the question of providing social security like PF, ESI, etc.

This scheme, if implemented, will render about 200 Posts of Commercial Clerks in the division as surplus and only10% of this surplus can be suitably redeployed in ticket checking branch. The future of the rest is quite uncertain, so much so that they may be asked to opt for retirement without extra benefits. It is also apprehended that such surplus staff are likely to be transferred to other divisions situated in other states, unsettling their family life and forcing them to apply for voluntary retirement.

Since the outsourced Ticket Booking Counters will be operated by inept persons having no formal training prescribed by the Railway Board, the intending passengers are likely to be subjected to different degrees of harassment such as closure of many ticket booking counters.

South Eastern Railway Mazdoor Union is determined for a bigger fight against such disastrous scheme, mobilising workers of other departments and Railway contract workers in co-ordination with AICCTU.