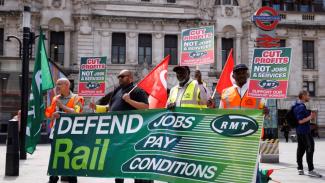 Thousands of railway workers in the United Kingdom embarked on a historic national strike on June 21, 23 and 25 against the attempts by Network Rail (that operates and develops most of Britain’s railway infrastructure) and train operating companies to cut thousands of jobs. The strike, which was organized under the banner of National Union of Rail, Maritime and Transport Workers (RMT) was the biggest rail strike in last 30 years. The union and railway workers are also demanding pay rise, social security and better working conditions as the inflation figures in the Britain reached close to 9 percent in April 2022, marking a 40-year high. As prices of food and other household items are increasing rapidly, the RMT is demanding a minimum of 7 percent pay rise and a complete stop on all job cuts by the companies.

“Railway workers have been treated appallingly and despite our best efforts in negotiations, the rail industry with the support of the government has failed to take their concerns seriously. Our union will now embark on a sustained campaign of industrial action which will shut down the railway system. Rail companies are making at least £500 million a year as profits, whilst fat cat rail bosses have been paid millions during the Covid-19 pandemic,” RMT general secretary Mick Lynch said in a statement.

Meanwhile, the Boris Johnson government has shown no desire to negotiate or to concede the railway worker’s demands and instead, they have stubbornly refused to compromise.

The workers of the London Underground (subway metro system), also under the banner RMT, joined the strike on June 21 with similar demands. More than 4000 workers of London Underground had embarked on a strike action previously on June 5 against the pay stagnation and job cuts by the company.

More unions, like that of postal workers and employees from transport and travel industries are also preparing for possible strike actions as the government and industries are planning to trample down the rights of working class under the veil of ‘Covid losses’.

The historic strike of the National Union of Railwaymen worker way back in 1989 that achieved 8.8% pay raise for railway workers continue to be the source of inspiration of the successful strike of 2022.

Solidarity Letter from IREF to RMT

Under the drape of ‘loss of profit,’ globally we are witnessing a trend of passing the burden on the working class with wage cuts and stagnation, dismantling of social security policies and mass scale retrenchment.

Since 2014 we have been facing the disastrous far-right Narendra Modi regime in India. With every passing day, the government has been implementing anti-labor policies in the name of ‘ease-of-doing-business.’ We are witnessing large scale privatization of railways, including selling of railway stations, production units and the rail network to private corporates. Majority of jobs are being converted into contractual/ casual positions, leaving workers without any social security and proper wages. During the outbreaks of COVID-19 pandemic, the Modi government has aggressively moved ahead with the implementation of anti-worker 'labor codes', which will wreck disaster for working class in India creating a situation of bonded labor.

Amid the onslaught, we are fighting back attempts to trample the rights of the working class. The success of national strike in the UK, the largest in the recent history, is an inspiration for millions of workers including rail-workers and toiling masses across the world and in India, who are facing increasing neoliberal onslaught amid the COVID-19 pandemic.

IREF being the youngest federation in Indian Railways representing the aspirations of more than hundred-thousands of railways' workers reiterates it’s solidarity with the the working class of Britain for successfully demonstrating the strength and resilience of their unity. At a time when the railway workers in India are facing unprecedented attacks by the right-wing, pro-corporate, communal government; your strike gives us another reason and a bright ray of hope to intensify our struggles.