Soldiers as Job Seekers: The Agnipath Scheme and its Discontents 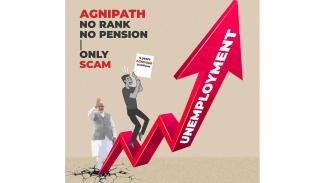 In a leaflet written in the middle of March 1917, Lenin summed up how the February Revolution had come about:

The insurgent workers were joined by most of the men of the Petrograd and Moscow garrisons. The workers and peasants in soldier’s uniform extended a hand of brotherhood to the workers and peasants not in uniform. The honest-minded part of the officer corps joined the revolution. Officers who tried to go against the people were shot down by the soldiers.[1]

Armies are usually laden with workers and peasants in uniform, who also wear a powerful military identity. However, there are times in history when the drudgery of ruling class wars diminishes this seemingly overwhelming military identity and enables organic class solidarities to emerge. India stands at a juncture when the endless expansion of neoliberal policies could possibly create the conditions for soldiers to feel more like ad-hoc workers in a private company. The Agnipath scheme looks like a step in that direction.

The scheme completely transforms the previous pattern of recruitment to the soldier rank. Once selected, the recruits will go through training for six months and will then be deployed for three-and-a-half years. Whereas earlier they were deployed for a minimum of 15 years, now they will be deployed effectively only for 4 years. After 4 years, only 25% of the recruits will be taken in as permanent recruits and the rest will be discharged.

During this period of 4 years, the Agniveers, as the government calls them, will get a starting salary of Rs 30,000, along with additional benefits which will go up to Rs 40,000 by the end of the four-year service. 30 percent of their salary will be set aside under a Seva Nidhi (Welfare Fund) programme, and the government will contribute an equal amount every month, and it will accrue interest. At the end of the four-year period, each soldier will get Rs 11.71 lakh as a lump sum amount, which will be tax-free. They will also get a Rs 48-lakh life insurance cover for four years. In case of death, the pay-out will be over Rs 1 crore, including pay for the unserved tenure.

However, they will neither get a lifelong pension or any regular benefits after being discharged. Unlike the previous system, their families will not get lifelong benefits in the case of their death during the four years of service. For those who are re-selected, the initial four-year period will not be considered for retirement benefits.

The scheme has been marketed on the ground that during the four years of service, the salary will be higher than under the previous employment model, and that the recruits will be allowed to study through distance learning or in Universities during their period of service. They will also be allowed to avail of education loans. 10% of seats in the Central Armed Police Forces (CAPF) and Assam Rifles will be reserved for those discharged after 4 years.

Notwithstanding these assurances, the protests have continued because at a fundamental level, the scheme brings with it a huge amount of precarity, uncertainty, and a non-existent kitty of lifelong perks and benefits that earlier came with the soldiers’ high-risk job. And that is an inescapable part of the scheme, since reducing the expenditure in salaries and pensions is a key reason behind its promulgation.

Neo-Liberalism and the Army

Activist and author Shivsundar sums up the cost-cutting motive behind this move in the following words:

Thanks to the neo-liberal fiscal conservatism driving official policy, the government is desperate to reduce expenditure on salary and pensions. In the defence budget of nearly Rs 5 lakh crore, more than 2.6 lakh crore is spent on salary and pensions. The Fiscal Responsibility and Budget Management Act (FRBM), 2003, enacted to show India’s creditworthiness to global investors, mandates the Union and state governments to adhere to fiscal discipline by bringing the revenue deficit down to zero, and hold the fiscal deficit at 3% of GDP. In practical terms, this means that the government must cut revenue expenditure and increase revenues to finance pro-capital reforms and spend on infrastructure required by global capital.[2]

The scheme reduces the soldier’s job to that of an ad-hoc worker at one stroke, of course not without some perks which an informal sector worker can only dream of. The perks are however minimal, especially when set against the aspirations that prod young people towards a career as a soldier despite the risks involved.

Over the last decade, neoliberal employment policies – contractualisation, fixed-term employment, withdrawal of social benefits – have been implemented in all sectors. Government recruitment too has increasingly become contractual, tentative and without pension benefits. Currently only around than 10% of the workforce is formal.[3] The Agniveers – first as soldiers under the recently expanded “fixed term employment” and later as workers under various kinds of contract, will swell the ranks of the 90 percent.

Pre-covid estimates for 2018 indicate that 80% of India’s 461 million workers, or 369 million of them, are in the informal sector – an overwhelming number among them being Dalit Bahujan and Muslim.[4] Even within the formal sector, several workers are employed as informal workers, as casual labour. That number has increased following the pandemic and has been legitimized by the new labour codes.

For most of the informal-sector workers, living and working conditions are very poor. Domestic and workspaces often converge into one. Unlike the formal sector, there is no regulation of wages, living conditions, working hours, and other social security nets. Due to their paltry wages, occupational multiplicity is the only way many workers can make ends meet. The state institutions are apathetic towards them; and this apathy is rooted in the lack of dignity given to workers.

The prospective Agniveers come from a milieu where work in the informal sector is the primary alternative to the army. When army recruitment is reduced to precarious short-term work, the anger of the youth is unlikely to die down quickly.

The protestors have received support from civilian as well as army quarters. Several additional concerns have been cited by former armed personnel and political leaders. Undervaluation of soldiers, who were being paid lower than the average civil servants even under the previous recruitment scheme, has been brought up as an issue. Questions have also been raised about the threat to national security, if the army is made up of soldiers who will have little incentive for risking their lives.

For the sake of the job-seeking soldiers, perhaps all kinds of solidarity are welcome right now. At the same time, it must be pointed out that not many people are raising voices against the long-term trajectories towards neoliberalism in the defence sector. Not many military personnel and politicians seemed to have a problem with the shift to 100% Foreign Direct Investment (FDI) in army equipment manufacturing. This step, taken in 2014, was a major one towards privatizing defence equipment manufactures. The current move needs to be understood in continuum with this policy.

There is a need for the progressive, democratic forces to step into the ongoing movement against the Agnipath scheme in even larger numbers. The fight against neoliberalism as well as against the Hindutva machinations could be expanded along several directions in the course of this movement.

If the 100% FDI policy enabled private players into arms manufacturing, the Agnipath scheme could now pave the way for Private Military Contractors (PMCs) to operate in the defence sector. Rahul Bedi rightly points out that the Agniveers’ youthfulness and accompanying vigour would be employable assets for PMCs.[5]

According to Dr Sean McFate, one of the world’s leading experts in the United States of America on soldiers of fortune and PMCs, mercenaries are here to stay, possibly increasing. Contracting had become a new American way of war, he stated, and trends indicate that the US could outsource 80 to 90% of its future wars to PMCs whose personnel largely come from national military forces. This pattern, Bedi suggests is likely to be copied across the world, especially in the US-admiring India.[6]

Worryingly, Indian military officers themselves seem to privately admit that Agniveers were “ideally suited” for such employment, as their training and deployment – especially in the Army – would be across terrain which offers diversity like nowhere else. This includes the upper Himalayan reaches, the Rajasthan desert, the flat Punjab plains, and the swampy jungles in the northeast.[7]

And of course, there is a genuine fear of Rastriya Swayamsevak Sangh (RSS) influencing military recruitment during the filtering out process after four years. They have been looking for all kinds of ways to infiltrate into public institutions and capture them fully. A pro-Hindutva rank and file will certainly aid their political project of making India a Hindu Rashtra. At the same time, the discharged soldiers could come of use to them as well.

Concerned citizens have also pointed out that the trained and discharged Agniveers could become a menace to society. The menace is not a general one. In times when the authoritarian populist Hindutva forces are increasingly operating through a “militant fringe”, discharged Agniveers would be the ideal recruits to the Hindutva brigade. Unemployed, militarily trained working-class youth could thus become cannon fodders in communal and upper caste militias.

The debate on national security continues to be lopsided, with a focus on the territorial frontiers of the nation state. A large chunk of the army and paramilitary forces are deployed against our own people – in areas such as Kashmir and the Northeast, against “internal security threats'' in “Naxal” areas, and others. Private security agencies are on the rise, and they are often deployed by corporate agencies to safeguard grabbed and occupied land.

Will trained Agniveers be recruited for these roles? Will the Agnipath scheme pave the way for similar recruitment patterns across the paramilitary forces? Will private capitalist armies rise to a position of strength? These questions are not far-fetched. These questions are already being posed as part of the ongoing campaigns but perhaps more needs to be done to highlight the likely outcomes of the Agnipath scheme.

In today’s militarized political discourse, the hyper-masculine jawan is a figure of valour. For a change, and for the first time in the memory of our generation, the jawan is appearing in public as a worker and a job seeker. The nature and role of the army in a democracy has also become a matter of public debate.

The protests against the scheme seem to offer an opportunity to create a groundswell against the exploitative and precarious employment regimes perpetrated by neoliberal states and markets, and against hyper-masculine and militarized social and cultural set-ups. While several movements have been going on for farmers’ and workers’ rights, against economic inequality and corporate rule, for depolarizing society and de-escalating hatred and aggression, there is still some way to go before these can decisively shape mainstream politics. The protests against the Agnipath scheme, happening even in areas where the ruling party has got many votes, could be an important moment in this process.

[2]                   [2] Shivasundar, “Agnipath is a Marketing Trick in Which Job Destruction is Being Sold as Job Creation”, The Wire, 19 June 2022. Accessed at: https://thewire.in/government/agnipath-scheme-job-destruction-creation-modi-government.