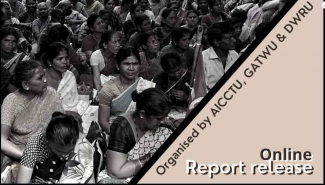 AICCTU Karnataka Releases Report on Workers in the Second Wave

On 18th May, 2021, the AICCTU released its report, which was brought out in collaboration with the Garment and Textile Workers Union (GATWU) and the Domestic Workers Rights Union  – “Workers in the Second Wave – The impact of COVID-19 lockdown on local and migrant workers in Bengaluru”. It highlighted the manner in which the working class and economically weaker sections are battling not only to save their lives, but struggling to secure livelihoods.

At the release, Shri Syed Zameer, from the Street Vendors Unions Federation spoke of the great difficulties faced by street vendors, where a majority of them were not earning a single rupee, and even those who were vending had to face police harassment. Renukamma from the Garment and Textile Workers Union highlighted the difficulties faced by garment workers who had lost jobs and sought immediate action to protect their lives and livelihoods. Smt. Ratna from the BBMP Powrakarmika Sangha (BBMP Sanitation Workers Union) spoke of the grave risk that powrakarmikas (sanitation workers) face everyday, not only of their own lives but also of their entire families and demanded immediate protection. Smt. Vanamma from the Domestic Workers Rights Union spoke of the grave discrimination faced by domestic workers and dedmanded a compensation package. Shri Prem Khan from the Karnataka Progressive Migrant Workers Union spoke of the difficulties faced by migrant workers in Karnataka and demanded financial assistance and food security.

On 15th May, 2021, construction workers from across the State came together online to highlight that they were not able to work due to lack of tansportation facitlites and lack of work, despite construction being a permissible activity. They raised the demand for financial compensation to be provided during the period of lockdown and for vaccination and adequate medical facilities.

On 19th May, 2021, a protest day was called against the complete failure of the Government in safeguarding the rights of the working class. Workers across the State including Bengaluru, Kolar, Mangaluru, Raichur, Koppal, Chamarajnagar, Kodagu among other districts, held up placards demanding the Government to ensure immediate steps to protect their livelihood, provision of financial support and food security.