Corona Pandemic: The Need is a Robust and Free Public Health Care System 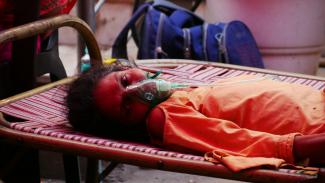 While the Modi-2 government at centre is being rightly held responsible for Corona-2 catastrophe in the country by people’s movements, the virtual collapse of India's public health care system in the face of 2nd wave has become a worrisome point. This wave of Corona pandemic has absolutely exposed the hollowness of our country’s public health care system and the criminally apathetic attitude of the ‘elected’ rulers towards the health care of common people.

The Novel corona virus (Covid -19) started in December 2019. In India, the first case was detected on 30th January 2020 in Kerala but no serious and rapid response was formulated by the central government. The central government was busy making exemplary arrangements to greet the then US President Mr. Donald Trump and also in toppling the elected government of Madhya Pradesh. In spite of warnings, the government remained casual towards the pandemic of such a huge magnitude. On 5th March 2020 Dr. Harshwardhan, the Union Health Minister, said in the floors of the parliament that there was no need to panic as coronavirus cases were only 29 in India and that the cases were declining in China.

Then came the abrupt, unplanned and most cruel Lockdown, announced by the PM Narendra Modi in the evening of 24 March 2020 which only proved to be a devastation of lives and livelihood of unorganised workers, daily wagers, particularly lakhs and lakhs of migrant workers spread across the country. Despite Lockdown and the spread confined mainly to major cities, more than 10 million people got infected and more than 1.5 lakh died. Our country’s pathetic public health system was largely exposed during this first wave.

Then came the 2nd and more dangerous wave of Corona, but the PM Modi was busy proclaiming victory over Corona in various international platforms. Despite continuous warnings by scientists and medical community about 2nd wave well in advance, the Modi govt. adopted an unscientific attitude and allowed Khumbh Mela at Haridwar one year earlier than scheduled, based on obscurantist ideas. Several lakhs of people were allowed to be congregated who became the carriers of second wave all over the country. All assembly elections were allowed and lakhs and lakhs of people were exposed to deadly infection. Thus the PM became the super spreader of Corona. Instead of improving the public health system and medical preparations, the government remained busy in ‘converting the crisis into opportunity’ for the corporate sharks and for their takeover of national resources and wealth. A disaster in the form of second wave was actually invited and facilitated by our rulers, the PM Modi led BJP and the obscurantist RSS.

The consequences were pretty horrible. The 2nd wave has been marked by extreme shortage of oxygen, beds, ventilators, ICU facilities, essential medicines and trained health staff. Above all, hoarding and black-marketing of medical essentials became rampant. Not even a single hospital was augmented with new beds with required facilities and not to speak of opening of new hospitals and of making elaborate arrangements to face the killer second wave. Even the existing make-shift covid care centres were dismantled in January - February 2021. Services of professionals and all warnings in combating this deadly disease were completely ignored. And as a result, the country has become a graveyard with the infection spreading fast this time to rural areas. Lack of required health infrastructure in rural areas has made the situation pathetic. Within a short span of two and a half months - March to mid-May 2021- death toll has touched several lakhs.  Official estimates claim a death toll of 1.5 lakhs – highest fatality rate in world during 2nd wave- taking total to around 3 lakhs  (some estimates put it to 15-20 lacs). 1.75 crore more have got infected taking the total to 2.75 crore. And now prevails an extreme shortage of vaccines. The much-trumpeted programme of vaccination has virtually come to a grinding halt in most parts of the country. Public health infrastructure is in doldrums and private hospitals are minting money. Now the third wave of corona is knocking at our doors and our governments and health system are far away from facing it.

Now, if come to reality check of our health system, India, the largest democracy, fairs poor in the Global Health security index, ranking 57th position, compared to other countries. The Indian government's expenditure on health as a percentage of GDP still hovers only around 1.5%, one of the lowest in the world. Under-investment in public healthcare system poses a challenge to India's COVID-19 containment plans. Nearly, 52% of households in urban areas, and 44% of households in rural areas have private sector as the main source of healthcare when they fall sick. In the time of pandemic, health expenditure rises to catastrophic proportions because of high cost of health care by profit hungry private healthcare system which is completely unregulated by the government. Extreme paucity of trained medical staff including doctors is a well-known fact. Health infrastructure in rural areas, which is a home to majority of the population, is totally inadequate and non-functioning. Health policies since last 20 years advocated by subsequent governments have only facilitated dismantling of public health infrastructure like ESIC and CGHS and opened the floodgates of private insurance schemes to facilitate reaping of super profit by private corporate companies.

The entire frontline workforce, including doctors and paramedic staff, who were working with dedication to fight Coronavirus, who interact with Corona patients on a daily basis, were not even provided with proper kits for protection and several of them were infected and many of them also died.  A few thousands of frontline workers have also died. No new staff are recruited according to the need of the situation on a regular basis though many regular employees have become prey to the coronavirus while on duty. Medical and Paramedics being under-staffed have become over-burdened and fell prey to corona. A large number of sanitation workers, who shoulder Modi’s flagship scheme of ‘Swachh Bharat Mission’ also died as they were engaged in cleaning of corona related waste but without any insurance protection or compensation. Much publicised Rs.50 lakh life insurance has not been given to the families of most of the deceased frontline workers. If we do the reality check, we find that our health system- both public and private- is running on the shoulders of extremely under paid, slave like contract and casual workers and voluntary / honorarium-based scheme workers like ASHA and Anganwadi who live and work in most precarious conditions. On the recommendations of the 6th and 7th Pay Commissions, the permanent posts are being abolished on a regular basis and being replaced by irregular workforce of different kinds. More than 60% medical staff at present is on contract/casual basis.

Keeping the health of the people of the country in such a miserable condition tantamount to nothing but a genocide. The health, which is most precious and fundamental in everyone’s life, cannot be sustained with a meagre allocation in budget and with rampant privatization. Forcing an extremely under paid, irregular and contract workforce to operate in working conditions of slavery to manage such a huge disaster is completely inhuman and illegal. The corona pandemic is only an eye opener. We must heed to the corona warning. In usual conditions too, thousands of people die in our country due to lack of proper public health system. WHO says that India is the country where largest number of people do not have access to essential medicines.

So, the need of the hour is to make health a fundamental right of common people. Not to treat it as a commodity to make profit. Building up a robust and free public health care infrastructure with regular health staff can only be a solution to face the disaster. Privatisation can only aggravate the disaster and intensify private loot.