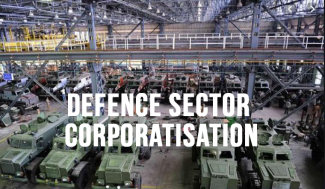 They are not just cajoling Corporations, Beware!

They are implementing an integral design of

[This is a foreword by Comrade Shankar V, all India president of AICCTU, to a book written in Tamil titled, “The Fall of Ordnance Establishments and its Implications” by a long time trade union and worker activist, Comrade Azhageshwaran, of Ordnance Factory at Trichy (OFT), Tamil Nadu]

Modi’s attempt to convert defence factories into corporations is aimed at privatisation.  But handing over them to the private corporate houses constitutes a strategic point of view. The strategy is to transform India into a frontline state in import – export of arms and to mortgage our beloved country to the merchants of death. It is a fascist dream project of plunging into arms race and thereby establishing its hegemonic ambitions. Hence, it is neither simply about converting defence factories into corporations nor only about handing over defence production units to friends of Modi-RSS. Rather it essentially is a process of   corporate - communal hegemonic ambitions of establishing Hindu Rashtra by transforming the entire country into a merchant of death, into a fascist state.

It is part of a corporate, fascist hegemonic dream of converting the globe into a graveyard by transforming India into a Defence ‘Manufacturing Hub’, by mortgaging Indian safety, security and sovereignty to foreign imperialist powers, by allowing 100 percent Foreign Direct Investment, all in the name of “Make in India”.

In order to facilitate the fulfilment of the dream, the licensing methods and due permissions are being simplified. The licence or permission is not required if a person, company or a country want to repeat the same order for any number of times. Hitherto mandatory ‘End User Certificate’ is not needed any more. The period of license to manufacture ordnance is stretched to 15 years from its present 3 years period and is also allowed to renew it for another three years.

The amendment to get rid of End User Certificate is potent enough to encourage criminalisation at domestic and international level.  It has also the potential to create the worst effect of criminalisation of the society and the people. It can also make our arms available to international criminals and mafia. It will definitely pave the way   to make easy availability of deadly weapons inside the country. Thus, the dream of establishing communal fascist state constitutes several evil designs. The acts are being amended only to facilitate such a menacing master plan. The Modi government has chosen the route of corporatisation of defence factories and subsequent privatisation only to facilitate its intention of establishing a hegemonic fascist state. The defence workers movement should understand the intention of the fascists in the correct perspective and should target the movement against the fascist intentions and designs of the Modi led BJP government.

Several operations and activities of ordnance manufacturing have   already been privatised in the name of ‘outsourcing’. The workers employed in these outsourced activities and operations are already denied any legal protection of regularisation and safe working conditions. Now, legal protections is also being denied to 2 lakhs  workers by opening up  41 state owned  defence production units for privatisation, en route corporations. The job security norms for this 2 lakhs regular workforce to be thrown down the gutters without any legal protection looms large as a real possibility now and such dreadful days are seemingly closing near.

Next only to Israel, India has already attained the status of “Major Defence Partner” of America which is the primary death merchant of the entire world. Now, the safety, security and sovereignty of our country are being mortgaged to foreign powers in the name of furthering Indo-US military ties and cooperation.

In such a situation, all trade unions in defence sector industries joined hands and organised several struggles against the government policy of privatisation. All India strike of defence workers on Aug 20-25 received a huge and welcome response from workers. More than 82,000 regular workers and 40,000 contract workers of 41 defence production units all over the country joined the strike with all enthusiasm and undaunted spirit.  Around 600 junior managers too, despite not being part of the strike call, joined the fray. Only around 1500 Class A officers of top management went for work. Only the workers of essential services, with the permission of the union, discharged their duties. The wheels of defence production came to a grinding halt. There was absolutely no production. The strike was a historic success.

Similarly, if the all trade union calls of 30 days strike and indefinite strike had become a reality, the defence workers movement would have been the leading contingent of the Indian working class movement as a whole. The movement would have dealt a body blow to the privatisation ambitions, the anti-worker activities and the communal, corporate dreams of the Modi led BJP government. It would have opened the floodgates of workers strikes in the government and public sector units including banks, insurance, railways, etc.  Defence workers movement would have snowballed into a greater movement of workers of all sectors of the country. But unfortunately, it did not happen. It is the responsibility of every activist and worker of the trade union movement in the country to ponder over the question.

Ordnance factory workers strike is only a beginning of the forthcoming waves of strikes and struggles against the anti-worker, pro-corporate policies of the Modi led BJP government. It is also a protest against the military – industrial complex intended to be built by the Modi government. In such a situation, it is the responsibility of the working class movement in general and defence workers movement in particular, to enter into a deep introspection and adopt a new orientation, an alternative path and lend a revolutionary direction to the working class movement as a whole.