As Forgotten as the Dead: The Invisible Work of Crematorium and Cemetery Workers 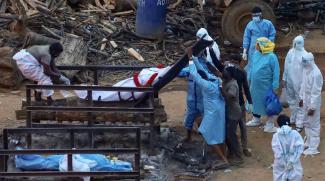 With an increase in the number of COVID-19 cases and deaths during the 2nd wave of the pandemic, the country is facing an inordinate stress on crematoriums and cemeteries for disposal of the dead. We continue to hear the news of how local authorities are identifying mass cremation centers to deal with the situation or how electric crematoriums are breaking down due to the load and cities are running out of burial space. In Karnataka, the Arch Bishop of Bengaluru wrote to the Bruhat Bengaluru Mahanagara Palike (BBMP) asking for more space to be allocated so that the Christian community can bury their dead with dignity. What we have also been privy to, is the inhuman amount of work being done by the crematorium and cemetery workers in conducting the cremations and burial of COVID-19 victims.

These workers who predominantly belong to the Dalit community, have been doing this work inter-generationally, as it is a caste-imposed occupation. Cremating and burying the dead being a ‘traditional’ occupation (a term used to gentrify what is basically a stigmatised occupation), tends to attract informal employment, whether the facilities are owned and run by the government or private trusts. The crematorium and cemetery workers are denied basic dignity and rights of a citizen. Based on our visits to about 20 crematoriums / cemeteries in Bengaluru, we found that these workers are not being paid minimum wages, nor any statutory or constitutional benefits are being extended to them. Neither are their services regularized nor are they being given mandatory social security benefits including ESI, PF, pension, etc. They are not considered as workers with rights, but as traditional caretakers of burial grounds.

The workers work 365 days a year, without any weekly off or national and festival holidays or any casual, sick, and emergency leave. With the exponential increase in the number of bodies being lined up for cremations and burials, the workers are working for over 12 hours a day, without any break. Each government or private crematorium / cemetery has some full-time workers who are never paid timely salary every month. None of the workers we spoke to reported  receiving full wage during the course of their work even before the pandemic. Workers in the government facilities received meagre lump sum payments every few months without any accounting of work hours. The workers, therefore, do not even know why and how their wage is being deducted.

Due to the increase in work, the crematoriums and burial grounds are employing more workers above their existing capacity. These additional workers do not even know how much they will be paid. In some other instances, the existing full-time workers are taking help from their friends so that they can cope with the increased work load and are paying them from their own meagre wages. The workers, under the banner of Ambedkar Dalit Sangharsh Samiti Rudrabhoomi Sangha, staged a protest outside the office of the Chief Minister in Bangalore in April 2021, seeking their dues. While the Chief Minister only ensured their dues and some small amounts as arrears, he failed to address the fundamental problems of suffering, pain, insult and economic injustice being meted out to these workers. There is no guarantee of fixed salary for the workers. Their wages can vary from Rs. 1,000 to 10,50 per month. The earning of the workers mostly depend on the largesse of the families conducting the last rites of their loved ones.

The workers are provided with Personal Protection Equipment (PPE) kits since they handle dead bodies. However, those workers performing cremation on fire wood do not wear the PPE as they are at risk of catching fire. One worker in such a crematorium reported injury on his hands due to fire while using the PPE. None of the workers have been tested for COVID-19. They have not received vaccination from their employers. Few of them who have received the vaccine, have done so out of their own initiative. It is amply clear that the government does not recognise these workers as frontline workers despite their greater exposure to Covid infections.

Workers in burial grounds and firewood crematoriums live on the premises with their families. However, due to the present circumstances, the workers in electric crematoriums too are living on the premises with no facilities for resting or washing nor have they been provided with any basic infrastructure such as water supply or sanitation facilities. Many of the workers stated that they face discrimination in the neighbourhood. For example, the women folk living on crematoriums and cemeteries work as domestic workers in the nearby houses to earn bread for the family but their services are terminated when the employers find out about their dwelling place.

These workers must be accorded the status of frontline workers and all due diligence in protecting their lives and that of their families must be prioritized. Not only must the workers be paid minimum wages, their services should also be regularized forthwith. They must be provided with wages on time. The workers must be compensated for their additional labour along with their statutory rights and benefits.