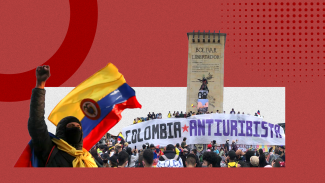 Colombia is witnessing massive protests and general strike since April 28 against the regressive proposals of tax reforms and privatization of healthcare by government of Ivan Duque. Hand in glove with the International Monetary Fund (IMF) and the United States, Duque government had been spearheading neoliberal agenda in Colombia  by robbing jobs, livelihood and rights of the people.

While all concessions are being given to capitalists and corporations amid COVID-19 pandemic, the burden of government’s economic failure are being forced upon the working class with policies like the new tax reform and privatization of healthcare.

Resisting the tax reforms and privatization of health plans, the workers’ union in Colombia had given the call for national strike on April 28. Massive mobilizations and road blocks were witnessed across Colombia with tens of thousands joining the strike in Bogota and Cali. On the day of International Workers’ Day (May 1), Duque government deployed military forces in three largest cities, the capital Bogota, Medellin and Cali, to quell the resistance where tens of thousands had come to streets in solidarity with the strike. Despite facing brutal repressions organized by military forces and the infamous Mobile Anti-Disturbance Squadron (ESMAD), the protests continue to expand in strength and spirit across Colombia. According to reports, more than 42 people have been killed in the police violence against the protesters and more than 1,139 people were arbitrarily arrested.

Facing tremendous resistance, the Duque government on May 2 announced the suspension of the proposed reforms, but the national mobilizations across Colombia continues demanding an end to neoliberal policies of Duque. The people are also demanding an end to police brutalities and justice for victims of police repression.

The neoliberal economic model, rampant privatization and state sponsored repression, along with the failure of the government to tackle COVID-19 pandemic has robbed people of their livelihood, dignity and right to justice. According to a study carried out by the Index of Regional Development — Latin America in October 2020, Colombia is one of the most unequal countries in Latin America and it has the widest development gap among its own regions. In Colombia, more than 7.4 million people are living in extreme poverty. The lack of economic support for people during the pandemic has led to further increase in unemployment rate in the country to around 15% in 2021, with more than 3 million currently without any job.

The working class and toiling masses of Colombia are determined to put a stop to the anti-people neoliberal policies and sponsored state violence of Duque regime. The people are also demanding an end to Colombian government’s support to the US imperialist agenda in Latin American region.

AICCTU extends its unwavering solidarity to the on-going national mobilization in Colombia by working class, peasants, students, indigenous groups and different sections of the population. We also reiterate our support to the demand of an end to the US and IMF’s neoliberal and imperialist project in Latin America.