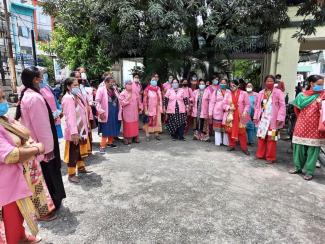 Bihar State level convention of municipal sanitation workers was held on 10 September 2021 at Patna under the banner of “Bihar Rajya Sthaniya Nikay Karamchari Mahasangh” (Bihar State Local Bodies Employees Federation) affiliated to AICCTU on the topic, "Present Situation and the Role of Municipal Workers". The convention began with paying homage to those who died due to Covid, different industrial accidents and natural disasters.

The convention was presided over by Comrade R.N. Thakur, president of the federation and conducted by Shyamlal Prasad, the General Secretary. An approach paper was presented by Comrade Shyamlal Prasad on which representatives of different unions of municipal corporations and local bodies expressed their opinion.

The convention declared that if the Nitish-BJP government does not comply, in time, with the directions of the Patna High Court in the course of its intervention in the indefinite strike of municipal workers, the Bihar State Local Bodies Employees Federation will re-launch an agitation against the government and will compel it to fulfil the demands of municipal workers. It may be recalled that the Patna High Court had directed the government to submit its response, within 8 weeks, on the 12 point charter of demands including regularisation of workers, implementation of 7th Pay Commission and Rs. 21000 per month as minimum wages. The convention also adopted a plan to strengthen the federation at the level of every Municipal Corporation and local bodies.

Addressing the convention, CPI (ML) MLA Sudama Prasad said that all 12 MLAs of the party have strongly stood with the indefinite strike and will continue to stand with the demands and the struggles of sanitation-municipal workers of the state, both inside the Assembly and also on the streets. It was reiterated that CPI (ML) will consistently stand with every struggle of municipal workers till the fulfilment of their demands.

Other MLAs of CPI (ML) said that whereas municipality sanitation workers clean the garbage of the cities and keep the people healthy, Nitish government is branding them as the garbage of cities, compelling them to leave cities by destroying their slums and is also threatening them to be sent them to jail if they protested. Thus, the government is snatching their livelihood and rights. Speakers accused the Nitish government of destroying the autonomy of municipal corporations and local bodies in order to hand them over to the private companies and said such moves will never be tolerated.

AICCTU comrades from six states/UTs, Uttarakhand, Delhi, Punjab, Rajasthan, Chandigarh, Gujarat and railways participated in two-days long workshop held Udaipur, Rajasthan on 18-19 September, 2021. The workshop was held in the backdrop of ever increasing attacks on the working class of the country and of the ongoing farmers’ movement against the devastating farm laws. It was attended by 70 participants from various sectors including construction, domestic work, automobile, railways etc. A good number of contractual workers from different government institutions also participated in the workshop.

The workshop started by paying tributes to the martyrs of farmers’ movement along with Comrade Ramkishan, Comrade Lakshman Patanvadia, Comrade B B Pandey, Comrade S P S Yadav and Professor R N Vyas. The workshop was inaugurated by Comrade Shankar, National President, AICCTU followed by a brief history of farmers’ movement in Rajasthan by Comrade Shankarlal Chaudhary. While outlining the current developments and challenges for the working class, Comrade Shankar laid stress on finding new ways to fight the dangerous situation ahead. He stressed on the need to organize the emerging as well as the most vulnerable sections of workers and said that the new changes in labour laws would take us back to an era where there were no laws for the protection of workers. He emphasized that the working class should prepare itself for the battles and challenges ahead.

The first session of the workshop started with a brief sketch of trade union movement in the country. The presentation was made by Comrade K K Bora, Comrade Kamal Usiri made a presentation on railway workers and their issues. The post-lunch session of the first day was addressed by Comrade Saurabh Naruka on the current challenges ahead of the workers’ movement. The first day concluded with group discussions and small presentations by participants. Important issues including abrogation of labour laws, ongoing farmers’ movement, privatization, increasing communalization, issues of caste-gender-language based inequality and divide, etc., were addressed during the last session of the day. All activists joined the group discussion quite enthusiastically.

The second day started with an enlightening session on ‘labour codes’ by Comrade Surya Prakash which was followed by an address by Comrade Rajiv Dimri, General Secretary, AICCTU. Comrade Rajiv Dimri stressed on the need to fight rapidly increasing communalization tooth and nail and to get organized for the tough battle ahead. He gave an overview of the joint trade union activities as well as new sectors/areas where AICCTU made a mark in recent times. Comrade Rajiv Dimri called for better coordination among participating states and sectors in future programs.

Professor Sudha Chaudhary gave her important observations and remarks in the post lunch session which was followed by a multimedia presentation on ‘social media and its need and utility in working class struggles’. The session on social media was conducted by Abhishek, with help of Jeevaraj. Comrade Abhishek explained the basics of using social media platforms to the participants. The workshop also showered praises and greetings on local comrades for making excellent arrangements for the regional workshop. The workshop ended on 19th evening with a firm resolve to strengthen the workers’ movement in the country in the face of increasing adversities.

The ASHA Workers Movement of Uttarakhand Achieves Its First Milestone!

The ASHA workers of Uttarakhand have been valiantly fighting for their rights and dignity of their work since the lockdown disaster hit the country. The historic strike of the ASHAs on 2st August, 2021 was an important milestone in their struggle. The representatives of the ASHAs have met the Chief Minister himself twice. They have also raised their demands with several ministers and government officials. It is a matter of great shame that the highest offices of the UK government have given mere lip service to the importance of the work done by ASHAs. They are reluctant to recognise the ASHAs as workers and guarantee their basic rights.

The recent phase of the movement of ASHA workers started on 23 July, 2021 when the ASHA workers held block level demonstrations and submitted mass deputation to the CM of Uttarakhand. Since then, the ASHAs have raised their demand and met officials several times. Several protest actions have been held by the ASHA workers against the blatant denial of their rights. When the government continued to remain unresponsive to meet the demands of the ASHA workers, they decided to go on strike from August. On 31st August the ASHA workers called for a march to the Cheif Minister’s  Camp Office in Khatima. Uttarakhand Health Workers Union affiliated to AICCTU along with some other unions took part in the protest. The government declared a deadline of 20 days to address demands of ASHAs.

When the government failed to fulfill its commitment within 20 days, the ASHA workers started their strike again on 5th October. As a result of the increased intensity of the ASHA workers movement, the cabinet of ministers decided an increase in monthly allowance of ASHA workers by Rs 1500.

This was an important declaration for the ASHA workers. They decided to end their strike for the time being with reiteration of demands for monthly salary and pension.

The Uttarakhand Health Workers Union stated in a press statement that the brave and consistent fight of the ASHAs have won them an increase in monthly allowance by Rs 1500. The union stated that the fight for recognition as workers and ensuring monthly salary, pension along with other workers’ rights are yet unacheived. The movement of the ASHA workers shall continue until they get their rights. The union issued a 12 point demand charter including the following-

• Give Pandemic Allowance of Rs. 10 thousands per month.

• Ensure life insurance of Rs 50 lakh for each ASHA worker.

• Ensure health insurance of Rs 10 lakh for each ASHA worker.

• Ensure pension for every ASHA.

• Ensure timely payment and arrear of payment according to increased rate.