On fixation of Minimum Wages And Redundancy of Expert Committees 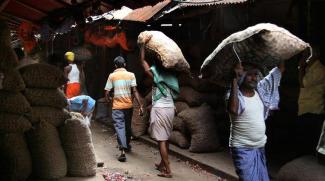 Given the characteristics of Indian labour market minimum wage becomes very important. Indian labour market is characterized by huge excess supply of unskilled labour. This puts downward pressure on the market wages. Existence of huge excess army of labour may lead to stiff fall in wages, in certain cases, at an abnormally low level. Such low level of wages does not even ensure minimum sustenance and consequently non-fulfilment and reproduction of labour power. It is no surprise that a significant section of adult working population and their family members suffer from sub-optimal nutrition. They are also prone to certain occupational diseases since they mostly work in poor and unhygienic work condition.

In India, because of labour market imbalances (supply far exceeds demand) and prevalence of neo-liberal economic policies, there has been large-scale informalization of the labour force over the last three decades. More than 90 percent labour force is informal. They don’t have job security beyond the tenure of contract and they can not access institutional social security instruments either. Most of the labour laws won’t apply to informal labour. They remain outside the purview of protective labour legislation. Very few labour laws actually can be applied and Minimum Wages Act 1948 is one such legislation. Both State and Central government fix minimum wages pertaining to each employment listed in the schedule of employment. Minimum Wages are dynamic in the sense that those are adjusted every six months against the changes in consumer price index. For each employment, minimum wages are notified at three levels: unskilled, semi-skilled and Skilled. For a particular employment, fixation of minimum wage is done once that employment is incorporated in the schedule of employment. For such incorporation, there must exist at least 1000 workers in that particular state. It takes considerable amount of time for the newer forms of employments and occupations before those are enlisted in the schedule.

In 2018, the Ministry of Labour and Employment, Govt. of India, constituted an expert committee under the chairmanship of Anoop Satpathy. The “Expert Committee on Determining the Methodology for Fixing the National Minimum Wages,” in its report submitted in January 2019, outlined a methodology for enumeration of minimum wages, which used consumption expenditure and employment data to arrive at a figure that allowed for a balanced diet and other non-food essential items and expanded the units of consumption per household. Based on this, the committee stated a figure of Rs. 375 per day as on July 2018, as the national floor level minimum wage, “irrespective of sectors, skills, occupations and rural-urban locations.” Alternatively, it recommends national minimum wage for five different regions with diverse socio-economic and labour market situations ranging from Rs. 342/- to Rs. 447/- per day. It also recommends  “city compensatory rent allowance” averaging to Rs. 55/- per day for workers in urban areas. While this figure is much higher than the non-binding national floor wage of Rs. 176/-  (based on National Commission of Rural Labour Recommendations), it is much lower than the Rs. 600/- demanded by trade union federations, based on the 7th Pay Commission recommendations.

Minimum wage fixation, as Satpathy committee (2019) also acknowledges, is based on two key features: first, the recommendations of the 15th Indian Labour Conference (1957), and second, the Supreme Court judgment in Workmen v Reptakos Brett (1992). The former outlined a need-based minimum wage, stipulating criteria for proper dietary intake, adequate clothing, housing requirements as well as other expenditure such as fuel, etc. The latter expanded the notion of minimum wage to include children’s education, medical care, recreation, and contingencies such as marriage and old age. Taken together, both these provide a substantive and concrete understanding of need and well-being in determining minimum wages.

There was no formal acceptance of the Satpathy committee report by the Ministry. Rather, the Ministry of Labour and Employment, Govt. of India recently announced the formation of an expert panel “to provide technical inputs and recommendations on fixation of Minimum Wages and National Floor Minimum Wage.” While the terms of reference have not been announced, the panel’s tenure is set at three years. The new panel comes amidst discussion surrounding the draft rules on the wage code, which were notified in July 2020. The Code on Wages, passed in July 2019, consolidates four prior legislations pertaining to wages. It has mandated a floor-level wage at the national and regional level, as well as a simplification and broadening of the different employment- and occupation-related minimum wages. However, the draft rules do not appear to enhance clarity on coverage or enumeration of minimum wages. The second wave of the pandemic has delayed the final notification of these rules. In this context, a new committee to recommend floor-level wages is a little surprising, considering that in early 2019, another expert committee with a similar mandate had already submitted its recommendations to the government.

Opinions expressed are that of the author.

*Kingshuk Sarkar is an independent researcher. π