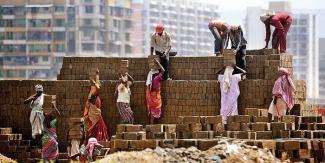 The workers in building and other construction work [BOCW] sector are some of the most marginalized, systemically unsafe and physically exploited. In India, official statistics show that there are 5.1 crores of construction workers across the country, who produce 9% of the annual gross domestic product [GDP]. Certainly, their number and contribution will be even higher. Since 1996, the employment and service conditions of BOCW workers was regulated by the Building and Other Construction Workers (Regulation of Employment and Conditions of Service) Act, 1996 (BOCW Act).  The present central government has been strongly pushing through four anti-worker labour codes that repealed a number of existing hard-won labour laws and labour rights. In this series in Workers Resistance, we have been looking at the major changes in labour codes and its implications on the workers. With respect to BOCW workers, some of the important changes are as below:

Both the BOCW Act as well as the SS Code contemplate the constitution of a welfare board at the state level with certain functions [S. 22 of the Act and Section 7(6) of the SS Code]. However, the functions of this Board have been changed as follows:

a.   Immediate assistance in case of an accident is removed.

b. Sanctioning loans and advances to a beneficiary for house construction is dropped.

c. Educational function changed from giving financial assistance for the education of children of beneficiaries to framing educational schemes for their benefit.

The Welfare Board under the Code will be newly endowed with a number of dangerous powers.

Firstly, under section 120(2) of the SS Code, the Board has the power to invest any money vested in it, subject to conditions prescribed by the government. The government should not be permitted to speculate/venture with the money of the workers.

Secondly, according to the BOCW Act, the Board may be given loans by the central government and this is continued in the Code too. However, section 120(3) of the SS Code permits the Board to raise loans and take measures for discharging such loans with the prior sanction of the central government, presumably from private lenders. It is unclear why this is necessary, and may lead to undesirable results.

Thirdly, section 121 now permits the Board to write off losses in respect to cess, interest and damages due to it if it is of the opinion that the amount is irrecoverable. It may be noted that non-performing assets, written off by the government increased from Rs.  3,23,464 crores as on 31 March 2015, to Rs. 10,36,187 crores on 31 March 2018, and Rs. 8,96,082 crores as on 31 March 2020.  This provision seems to equally permit the writing off of statutory liabilities of employers.

Further, the Code allows the state government to supersede welfare board if it is of the opinion that it is unable to perform its functions, or, has persistently made delays in the discharge of its functions or has exceeded or abused its powers or jurisdiction. After supersession, the state would make alternate arrangements for the purpose of administration of the relevant provisions until the reconstitution of the Board. No time limit has been provided for reconstitution of the Board.

The entitlement of registration of workers in the Code and the Act are very similar. However, the term “building and other construction work” is defined under the Code in a manner that excludes construction of residential works under fifty lakh rupees, which can have consequences on the entitlement to registration itself. Importantly, the mandatory contribution to the Welfare Fund has been done away with in the Code. Few statutory mandates in the BOCW Act that were very beneficial for the workers have been done away with, for instance, the mandate to provide identity cards.

The Code includes a number of responsibilities for the employer in Section 6 of the OSH Code. However, it removes two vital responsibilities, mandated under section 44 of the BOCW Act, including (I) i.e., the responsibility for providing constant and adequate supervision of any building or other construction work in the employer’s establishment so as to ensure compliance with the provisions relating to safety and that of (II) for taking all practical steps necessary to prevent accidents.

The BOCW Act mandated the provision of free temporary accommodation, drinking water and latrines to workers. The Codes change these statutory entitlements to facilities that the central government may prescribe. Hence, there is no right to workers to these facilities if not prescribed.

In terms of Section 58 of the BOCW Act, the Employees Compensation Act [ECA], 1923, would apply to all building workers. However, the ECA has been reworked into Chapter VII of the SS Code and applies only to employees enlisted in the Second Schedule. Under the second schedule a number of workers who would fall within the definition of BOCW workers would not be entitled to compensation in case of a workplace injury. For example, workers involved in alteration of any building etc would be building workers, yet not entitled for compensation. Moreover, only buildings that are more than one storey in height above the ground or twelve feet or more from the ground level to the apex of the roof would be covered. A number of categories are totally excluded such as building workers involved in construction of oil and gas installation works.

The provisions relating to BOCW Cess are heavily diluted in the SS Code with provisions for self-assessment by the employer of cess and reduced rate of cess and interest.

In the BOCW Act, workers were entitled to double wages for overtime work or work done on a day of rest. Now, the Code of Wages provides the same in respect of employees whose minimum wages have been fixed under the Code [Sections 13 and 14]. It is unclear whether only workers at minimum wages would be entitled to such double payment now, though that seems to be indicated by the wording of the provision.

Apart from the reduction in penal liabilities that have been previously discussed in this series, two important points can be observed.

Firstly, penalties would be imposed on workers for violation of the Code. Section 106 of the OSH Code specifies penalty of upto Rs. 10,000 for contravention of any provision of the Code imposing a duty on the worker. The duties include a duty to comply with the safety and health requirements specified in the standards. Shockingly, if it proved that the employee had contravened his duty under the Code, “the employer of the establishment shall not be deemed to be guilty of an offence in respect of that contravention, unless it is proved that he failed to take all reasonable measures for its prevention.” This can lead to terrible consequences that impose liability on workers for workplace accidents and simultaneously, take away the liability of the employer for such contravention.

Whereas under the BOCW Act, the Court could take cognizance of a complaint on the application of a registered trade union, the OSH Code mandates the cognizance on the complaint be made by the inspector-cum-facilitator. This lengthens the process and does not guarantee an aggrieved worker an opportunity to take his case to court.

As it stands, there are grave issues with functioning of the BOCW Act. Though government states that there are 5.1 crores of construction workers, as per its own figures, only 3.92 crores are registered.  Thus, there are more than a crore construction workers without registration and facilities under the Act. Morevoer, the recording of accidents is gravely lacking – the central government only recorded 32 accidents in construction sites in the central sphere between 2017 and 2019.  Similarly, the number of prosecutions as opposed to violations illustrates the leniency shown to violative actions by employers.

The dilution of rights of workers and duties of employers in the Code will only worsen the situation. A concerted effort must be launched by construction workers unions, and other unions in solidarity, to ensure these Codes are not notified.