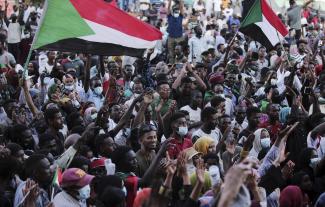 Trade Unions and progressive sections of the society in Sudan have embarked on a General Strike action against the 25 October coup led by army chief General Abdel Fattah Al-Burhan. The coup led to dissolution of the Sovereign Council and the government and the declaration of a state of emergency.

Millions continue to march across Sudan chanting "civilian rule is the people's choice” and "no to military rule" despite massive state repression. As on 26 October, 12 people have been killed and more than 100 injured, as troops fired on thousands of protesters opposing the coup.

The Sudanese Professionals Association (SPA), which played a leading role in the 2019 uprising against the Omar al-Bashir dictatorship in 2018, said: "This coup is a continuation of the Security Forces of the National Congress Party and its militias, which began on 11 April, 2019 with the aim of blocking the path of the December Revolution and aborting it”.

This coup comes in the midst of a political crisis that culminated in the intensification of the conflict between the two parts of the ruling body, the military and the civil sides, that formed the Sovereignty Council, which assumed power after the overthrow of the Bashir regime by a popular revolution (December 2018 revolution). Last month a coup d'état attempt was organized by the military ranks loyal to Omar al-Bashir but failed to materialize. Since then, voices for complete transfer of power to civilian authorities had been growing stronger, creating a rift between the military forces and sections supporting a civilian rule.

On 16 October, a group of pro-military rule protesters marched to reach the gates of the presidential palace in Khartoum and called for General Abdel Fattah al-Burhan, the chairman of the Sovereignty Council, to seize control and take over the country.

The Sudanese Workers Alliance for the Restoration of Trade Unions calling for unity and solidarity issued the following statement on 26 October, in response to the coup: "We appeal again to the resistance committees in all districts and to all revolutionary political, professional, rights defender’s forces in all the cities and villages of Sudan to come together and occupy the streets and barricade them, and to continue all forms of civil disobedience and complete strike until we defeat the coup reaching to what our people deserve under the flags of Freedom, Justice and Peace". AICCTU stands in support of this call.