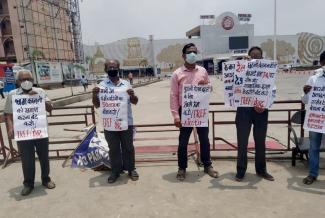 In 2014, the Modi-led BJP government decided to dissolve the Planning Commission (which was constituted in 1951 along the lines of a socialist model of centralised planning) along with the National Development Council formed to monitor the development of sectors like agriculture, education, health and also national transport systems like Railways, Roadways and Airways. Finally, on the conclusion of the 12th Five Year Plan in 2017, the Planning Commission was dissolved and was replaced by the NITI Ayog (National Institution of Transforming India). The Planning Commission used to allocate 24 per cent of the budgeted amount for Indian Railways and Roads. As a measure of social obligation of a welfare state, railway tracks were laid every year even in remote places of the country. Indian Railways too expanded rapidly to ensure transportation of essential commodities such as food grains, coal, steel and iron ore. Indian Railways spanning 67,956 route KM and 1,26,366 track KM as on 31.3.2020 is exclusively owned by the Government of India. The assets built over 70 years are now being offered on a platter to the corporates in the name of National Monetisation Pipeline (NMP).

In 1991, an era of liberalisation began and the ‘free’ market economy became the economic policy. Now, the Modi government has declared privatisation of national assets as the state policy, a move dictated by the crony capital of the country. Monetisation of railways, in the name of NMP, is likely to spell disaster for the Indian Railways, its workers and the common people while being a bonanza for the corporates. Now, let us look at the key assets for Monetisation over Financial Year 2022-25 in Table 1:

8) Others - Rly Colonies and Stadiums -15 stadia and selected Rly. Colonies

Asset-wise Break up is provided below in Table 2 (in crore rupees):

It is evident from the above table that the NITI Aayog has fixed a target for each profitable section of the railways and is vigorously pursuing the implementation of NMP as a pet agenda of the PMO. In this context, the Finance Ministry is only playing a subservient role. Even in certain cases, the Finance Ministry is being overruled by NITI Ayog.

Here, we can discuss one or two items of the target for NMP that affect the lives of common people:

Railway Station Development: Indian Railway Stations are the interface where people of different strata interact with the railways. The surrounding areas bustle with small business activities and passengers are the buyers of various food items and other articles. In the name of NMP, this area is bound to witness forcible evictions and snatching away of livelihoods of millions of people dependent on small businesses around.

The pro-corporate Model Concession Agreement (MCA) developed by NITI Ayog for a tenure of 50 to 99 years has now been reduced to 35 years and it ensures timely payment of development fees by the Railways. The inherent contradiction between the Finance Ministry and the NITI Aayog is reflected in the process of implementation of NMP. While the Finance Minister decided to merge RLDA (Railway Land Development Authority) with the IRSDC (Indian Railway Station Development Corporation), the NITI Ayog declared the closure of IRSDC, a decade old organisation designed for station redevelopment.

Private Train Operations (PTO): Private trains will be operated by the domestic and foreign corporates on the Indian Railways network. These private players will have no upper limit to fix fares and will not require any approval from any authority. A decision has already been taken to hand over 151 trains on 109 prime routes to private players for 35 years. An MOU has already been finalised for 90 trains up to FY 2025. The routes will be divided into 12 Clusters on O.D. basis (origin and destination). Safety standards and rake maintenance are likely to be compromised for the sake of corporate profit. Obviously, such modern coaches, with exorbitant fare, will be out of reach of common people. Neither can it provide accommodation to the huge wait-listed population including migrant workers, common working people of low income group nor can it address the issue of  overcrowding of unreserved compartments. Moreover, such sophisticated trains will run on a dedicated slot, getting precedence over ordinary Mail Exp/Super-fast trains. This is nothing but a naked corporate loot of Railway infrastructure and resources.

Eastern Freight Corridor financed by the World Bank and Western Corridor by the JICA (Japan International Co-operation Agency) are said to be meant exclusively for goods train movement so as to avoid congestion of passenger services over main line and timely transport of raw materials for industries. The Modi government has decided to sell the assets through NMP, on completion of DFC. Now, the private players will operate their trains on DFC tracks and Reliance and other Telecom giants can use 2,800 KM of the Optic Fibre infrastructure laid by the railways. In addition, Adani is rewarded with gifts of warehouses in the country with a capacity to stock 210 lacs of Metric tons of food grains.

The whole exercise of NMP is tailored to the needs and profits of the corporates. The false narrative and argument that the Railway suffer from resource crunch and needs urgent capital investment through the monetisation method does not hold water. In fact, the Modi Government refuses to reimburse Rs. 25,000 crores per year to Indian Railways which was spent on social service obligations. Indian Railways is the only organisation of the government of India which continues to bear the full cost of the Pay Commissions and Pensions of its employees from its internal resources. The Government is under social obligation to reimburse at least 50 per cent of payments made by the railways under Pay Commissions and Pensions, and the government refuses to do so.

The railway employees under the leadership of AICCTU and Indian Railway Employees Federation (IREF) had organised  nationwide protests against NMP and Privatisation across the country through its campaign from 19th September to 28th September 2021 (Birth Day of Revolutionary Bhagat Singh).