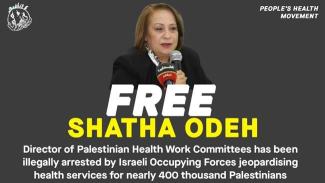 Prominent Palestinian Health activist and director of Health Work Committee (HWC)  Shatha Odeh was arrested by Israeli Occupation Forces (IOF) on 7 July 2021. She was arrested along with 10 other Palestinians during raids across West Bank as a part of the reprisal attacks by IOF against Palestinian population and activists for resisting the brutal Israeli aggression in May 2021. Another member of HWC Juana Ruiz Sánchez, the project coordinator, has been detained since 13 April 2021.

Odeh has been detained at Damoun Prison, located in Israel, where family members cannot visit her due to the arbitrary denial of security permits necessary for West Bank Palestinian residents to enter Israel.

The arrest came weeks after Israeli force’s raid at the office of HWC in Ramallah on 9 June 2021. They broke down the door, confiscated computers, memory drives and issued a military order forcing the office to close for six months.

HWC was established in 1985 by a group of Palestinian volunteers who worked in health sector for the purpose of meeting the health care needs of the Palestinian population living under Israeli occupation in the West Bank and Gaza Strip. The Israeli military occupation of Palestine, relentless airstrikes and air-sea-land blockade of Gaza destroyed the health system, a vital infrastructure in the West Bank and Gaza. The Palestinian hospital system faces critical shortages of supplies like medical equipment, prescription drugs, over-the-counter medications and protective gear.

The hospitals face regular electricity cuts and mostly on generators, and hence there is a heavy shortage of diesel fuel. Furthermore, for major medical treatments, Palestinians have to rely on hospitals in Israel, the permits for which are strictly controlled by Israel authorities. According to reports , nearly one out of every five Gaza patients who apply for a visa to get medical care in East Jerusalem, Jordan, Israel or even the West Bank receives a denial or experiences a significant delay. Amid these inhuman conditions in Palestine, people led organizations like HWC play a vital role in supporting the health system and medical needs of the people.

The attack on the HWC and the arrest of its director Shatha Odeh comes at a time when the collapsed health infrastructure in Palestine was trying to deal with the COVID-19 pandemic and the HCW has been at the forefront of the response to Covid-19 in Palestine.

The targeting of health care workers and health infrastructure in Palestine by Israel is a gross violation of Geneva Conventions.

All Central Council of Trade Unions (AICCTU) joins the international call for the release of Shatha Odeh and other imprisoned health workers and demands an end to the Israeli repression against the Health Works Committee.