Rental Housing is Another Bubble in ‘Modi-Sahi Yug’! 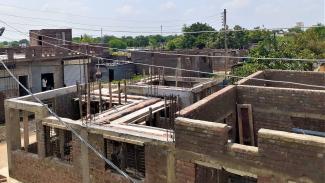 In the new India, Covid-19 pandemic has shown the actual photoscape of miserable government failures at all levels. The unplanned, unprecedented lockdown since March 2020 has brought about a never-ending exodus of migrant labour. Opening new-fields for the Indian multinational companies, the finance-corporate mafia -government nexus has pivoted the pandemic crisis to its advantage, while millions of low waged Indians have hit the new low of continuous uncertainty. There are various sets of data available on the impact of covid pandemic on the migrant workers. Most of them, however, has been fabricated and projected by the government as the success of the state policies. The truth is that there is not even a central registry of the migrant workers, despite the existence of Inter State Migrant Workers Act, 1979. Though the government is forced to act upon migrant workers now, the ARHC or the Affordable Rental Housing Complexes scheme is just another false development mantra. The EPW magazine, in its findings, said :  the 76th round (2018) of the National Sample Survey Office (NSSO) reports that about 91 million people in 31 million households (33% of all urban households) in India live in rented accommodations. Organized private sector rental housing, in the absence of any significant housing scheme by the government, implies that the market is dominated by private individual landlords (Harish 2016). By most accounts, these are formal and informal owners of extra-land, rooms, building floors and flats, as well as operators of ‘paying guest’ and other short-term and medium-term accommodation providers. In 2020, the reverse migration caused by the pandemic-related lockdown forced the attention of the policy makers and the civil society back to the question of rental housing. Civil society groups, unions and academic institutions observed that the ability to pay rent on time emerged as a critical issue for migrants and the urban poor alike, coupled with dwindling employment prospects.

The Schemes and past references

The ARHC scheme that was announced by the government of India, as a part of Rs 20 lakh crore Atmanirbhar Bharat Abhiyan relief package, envisaged the creation of affordable rental housing for the migrants and the urban poor. The ARHC is actually a sub-scheme of the Pradhan Mantri Awas Yojana - Urban (PMAY-U) that is implemented by the Ministry of Housing and Urban Affairs. The PMAY-U was launched in 2015 for providing affordable housing to the urban poor with a target of building 20 million affordable houses by 31 March 2022. No list of the beneficiaries under PMAY-U is available till October 2021, but the PMAY-U website is making tall claims about crores of benefited Indians.

A research finding of the University of Pennsylvania is that PMAY-U and ARHCs are not the first attempts to build public rental housing for urban migrants. The oldest of the schemes implemented by Bombay Development Department (BDD) dated back to 1920s that was created for migrant millworkers. Commonly known as BDD chawls in Mumbai, the state government in 1921 assumed the responsibility of constructing single-room tenements. As noted in the First Five Year Plan of India (1951-56), the BDD started with an ambitious target of constructing 50,000 tenements. However, the project halted after building merely 15,000 tenements due to mounting construction costs and the inability of the beneficiaries to pay the rent amount. Almost a hundred years later, in 2008, the Maharashtra state government introduced a similar rental housing scheme for migrants, called the Mumbai Metropolitan Region Development Authority – Rental Housing Scheme (MMRDA–RHS). This scheme had an ambitious target of constructing half a million single-room tenements within a span of five years, from 2008 to 2013, through a Public-Private Partnership (PPP) model. Eventually, the project was rendered untenable due to various factors such as uninhabitable density targets, lack of interest by private players, and lack of capacity of the public agency to manage rental housing stock. Both the schemes discussed here exhibit a discernible shift of government approach from a state regulated housing provision of BDD tenements to the MMRDA–RHS scheme resting on private player participation. The MMRDA–RHS experience demonstrates the over-reliance on the private market may inhibit the implementation of the ARHC scheme. In general, the policy history shows a recurring pattern of ambitious designs that remain unrealized either due to mismatch of needs and capacities of beneficiaries, or lacking buy-in from private stakeholders despite handsome incentives.

The ARHC policy documents do not discuss the means - testing method - to identify the potential beneficiaries of the scheme. As there are no explicit income criteria for eligibility, the scheme might miss out the most vulnerable migrant population and favour the relatively better off. The scheme heavily favours private actors such as real estate developers, job contractors, and informal employers who already exercise disproportionate control over the lives of the migrants. The PMAY-U and the AHRC are actually designed to strengthen the nexus of the government and the corporate construction industry. This development hoax cannot mitigate the workers’ demand for minimum wages, incentives and medical insurance. π