The Street Vendors and the Onslaught of the Pandemic, Anti-farmer Laws and Communalisation 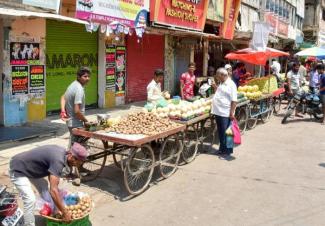 The life and livelihoods of street vendors have been debilitated post-COVID 19 pandemic. Street vendors who have always been at the receiving end of the State’s wrath through constant spate of evictions from their market places, hafta collections, verbal and physical abuse at the hands of the police, local authorities, and private individuals, have now been deeply affected by the looming economic crisis in the country. Additionally, they are also impacted by the anti-farmer laws as also the growing communal violence and the atmosphere of intolerance in the country. This article explores the plight of street vendors in this context.

Street vendors provide easy and affordable access to various commodities and services that are utilized by all classes of the society. The working class, especially benefits from the affordable prices of clothing and household essential items, as also fresh groceries and nutritious food. They also provide accessible repair and other services which are available at the doorsteps of every individual, thus making everyday lives much easier. They also contribute a great deal to our economy, which has been rendered invisible thanks to the constant bias they face at the hands of the State and private individuals like shopkeepers and residents. Street vendors are those who have migrated to urban areas looking for a livelihood option for various reasons such as rural distress (drought, floods, agrarian crisis, caste oppression, sexual assaults, destitution, etc.), unemployment, lack of capital to start a full-fledged business, among various other reasons. Many women depend on street vending as a livelihood option as they are often the sole-earners in the family.

However, they bear the brunt of the so-called development of urban areas. The State always looks at “development” or “beautification” of streets and cities and view street vendors in opposition to such developmental projects. Street vendors are perceived to be an obstruction in achieving their lopsided and exclusionary development, and therefore, stress more on “regulating street vending” than “protection of their livelihood”. In several instances, street vendors have been evicted for reasons such as cooking non-vegetarian food, for having lunch on pavements, for obstructing pedestrians, for causing traffic jams (!), in the name of reconstruction of footpaths, construction of malls and commercial complexes, metros, flyovers, underpasses, smart city, among numerous other pretexts which ensure that the livelihoods of these hawkers are severely impacted. Street vending offers independence to all those oppressed people in the society to earn a decent and dignified livelihood. There are several crores of street vendors across the country, but, they are all treated as encroachers. Thus, while bearing the brunt of such exploitation and harassment, street vendors struggle to make ends meet on an everyday basis.

Economic Policies and Platform Economy Adds to the Woes

To add to their already existing woes, demonetization and introduction of GST had direct impacts on street vendors. Even when they did not have access to smart phones, several street vendors were forced invest in smart phones so as to shift to PayTM and other digital wallets which were released subsequently. Many hawkers who sold clothes and other accessories feared that GST would be imposed on them or the middlemen who sell the wares to them, which meant that they would have to sell their wares at higher prices, resulting in a loss of customers. Similarly, the introduction of home-delivery platforms like BigBasket and Groffers too had an impact on the street vendors, which furthered the elitist perception that street vendors were “dirty” and these platforms served clean and hygienic groceries. Thus, while street vendors had their livelihoods already impacted by big and hyper malls, these platform-based apps further debilitated their livelihoods.

The changing labour laws are being fought tooth and nail by all unions, and one might expect street vendor unions to join the protest. While many of these laws don’t have relevance to street vendors, the Unorganised Workers Social Security Act, 2008 ensured that street vendors were extended certain welfare schemes by the government. While the same was not implemented effectively for street vendors to reap the benefits, the lack of this statute will further invisibilise street vendors from the view of the State. The Street Vendors (Protection of Livelihood and Regulation of Street Vending) Act, 2014 has not seen its full potential, and while it promises protection of livelihoods, the government has its focus on regulation of street vending, than protecting the rights of street vendors. It can also be seen that more and more unemployed workmen are opting for street vending as a livelihood option due to growing unemployment and loss of incomes and jobs.

Despite such difficulty, the government did not come forward to support the street vendors. The Karnataka Pragatipara Beedhi Vyaparigala Sangha and the Bengaluru Jilla Beedhi Vyaparigala Sanghatanegala Okkuta, both affiliated to AICCTU, demanded Rs. 15,000 per month to street vendors to overcome their crisis and held wide protests across Karnataka. During the lockdown in 2020, the Union Government announced the PM Street Vendors Atmanirbhar Nidhi (PM-SVANidhi) scheme for street vendors, wherein street vendors could avail a loan of Rs. 10,000/- to tide over their COVID crisis. Street vendors were ‘atmanirbhar’ had they been allowed to go about their livelihoods during lockdown and did not require the so-called charity of the Union Government to “tide over the crisis”. During the lockdown in 2021, the Karnataka Government announced that street vendors, who had previously availed the PM-SVANidhi scheme were eligible to a COVID relief amount of a paltry Rs. 2,000/-. To add salt to injury, both the Union and State Governments made a mockery by offering peanuts as relief amounts, which were availed by very few street vendors. Moreover, the current crisis they face is not only due to the pandemic, but that it has been exacerbated as they have always faced harassment and abuse from authorities, as also the evictions by the government every time there is a developmental project undertaken. Moreover, several street vendors also succumbed to COVID in the deadly second wave, including Mr. Nataraj, an office bearer of the Bengaluru Jilla Beedhi Vyapari Sanghatanegala Okkuta.

It must be noted that even before the pandemic, we saw that street vendors, especially food vendors, were often evicted and abused when there was an outbreak of cholera, dengue or malaria in certain areas. This was the case in Bangalore city, wherein several food vendors were evicted from February 2020 citing reasons of a cholera outbreak.

With the Union government introducing three anti-farmer laws and the Karnataka Government bringing in the Karnataka Agricultural Produce Marketing (Regulation and Development) (Amendment) Act, 2020, the Farmers Produce Trade and Commerce (Promotion and Facilitation) Act, 2020, the Farmers (Empowerment and Protection) Agreement on Price Assurance and Farm Services Act, 2020 (aka Contract Farming Act) and Essential Commodities (Amendment) Act, 2020, we see that street vendors who sell fruits, greens and vegetables will be impacted by this as well. These farm laws ensure commercialization and corporatization of agriculture itself and privatization of the APMCs, which means that the prices of food and other essential commodities would increase exponentially. Not only will it be difficult for street vendors to access the farm produce – as there won’t be fair competition at APMCs now due to its privatisation – but also that street vendors will not have enough capital to buy these commodities to be sold in the markets. This also means that common people will not have easy access to affordable food.

We also see that during festival seasons, several farmers turn into seasonal street vendors. With commercialization and corporatization of agriculture, these seasonal vendors will be missing from the scene. It is also seen that several street vendors also have small pieces of land where they cultivate small crops only to be sold in markets, which would also be rendered difficult due to these farm laws.

The polarization on communal lines that we are witnessing in the country has not spared street vendors either. In March 2021, during a yearly temple fair in Uppinangady Taluk of Dakshin Kannada, Mr. Abdul Harris, a Muslim ice-cream vendor, was thrashed by a mob of Bajrang Dal members stating that he desecrated the temple premises with his presence. They warned that no Muslim would be allowed to vend their wares, while destroyed the goods and wares of Mr. Abdul Harris and stealing all his hard-earned income.

On August 22nd, 2021, Mr. Tasleem, a bangle-seller belonging to the Muslim community in Indore, Madhya Pradesh was assaulted for doing “bangle-jihad”. A day later, Mr. Tasleem was booked by the police under seven sections of the Indian Penal Code, including the offence of forgery, for carrying multiple identity cards with different names, as also Protection of Children from Sexual Offences (POCSO) Act. Mr. Tasleem was brutally beaten up by a mob in a marketplace where he was selling bangles. The mob accused him of molesting a girl while trying to sell her bangles. Mr. Tasleem was arrested and continues to remain in jail. Incidentally, news reports state that Mr. Tasleem's father was a cattle trader until 2000, but he turned to selling bangles after the government prohibited the sale of bovines in Madhya Pradesh. A week later, on August 30th, 2021, a Muslim dosa seller in Mathura, Uttar Pradesh was assaulted by a mob of Hindu fanatics for having his stall named after a Hindu deity. As the communal mob thrashed the street vendor, they chanted a slogan calling "Krishna devotees" to "purify" Mathura.

In Bangalore, during the first wave of COVID and the resultant lockdown, an elderly Muslim street vendor who was selling grapes was accused of spitting on the grapes and selling them in order to spread COVID. This person who accosted the street vendor made a video while interrogating him and asked why he spat on the grapes. In the video, we hear the hawker stating that he spat on the road and not on the grapes, but the visibly shaken and humiliated elderly hawker goes on to apologise to the person making the video. The same was shared widely on social media platforms which were known for their communal agenda. After a backlash against this by progressive groups and individuals, the same was taken down.

In another such incident, Bajrang Dal goons tied bhagwas to street vendor stalls in Vijayanagar market, Bangalore, including the stalls and pushcarts of the many Muslim street vendors there to cause communal unrest among the street vendors. Due to the presence of the AICCTU affiliated union in the market, a complaint was filed and the flags were removed.

Street vendors are not only facing discrimination and abuse at the hands of the State in the name of development, but are now impacted by the anti-working class policies, anti-farmer laws, COVID crisis and the increasing communal violence against minorities and the working class. It is in this context, it becomes pertinent that AICCTU works towards collectivizing and politicizing street vendors across the country, not only to fight for their rights and livelihood, but also to stand up against the economic onslaught of the Modi Government as also against the communal assault of the Sangh Parivar.