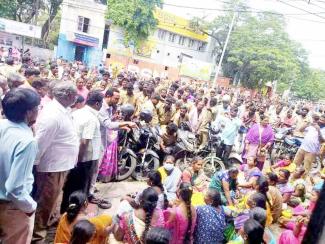 Corporation of Coimbatore in Tamilnadu consists of 100 wards. Some 4,000 workers are employed in sanitary work by the corporation. In spite of their service for more than 13 years, sanitation workers are neither regularised nor paid mandatory minimum wages. They are being paid with Rs. 333 as daily wages for the last four years without any hike.

Even the Tamilnadu government has not paid the announced incentive for their contribution during COVID-19. The minimum wages announced 5 years ago, i.e., in 2017, by Government of Tamilnadu also has not been implemented since then. In the meantime, the District Collector of Coimbatore declared Rs. 721 as minimum wages for sanitary workers in July 2022 (now popular as ‘Collector Rate of Wages’). There were struggles independently by various trade unions for the implementation of the collector rate of wages, but in vain. So, it was decided to form a Joint Action Committee (JAC) of all trade unions and AICCTU was part of it. In a way, our pamphlet explaining Karnataka sanitation workers' strike for regularisation and its successful experience was also an inspiration for such a move in Coimbatore. Unfortunately, CITU and another organisation of DMK alliance refused to join the strike. They also indulged in actions in support of the government.

The JAC decided to go for an indefinite strike from October 2nd with a 16-point charter, including regularisation, equal pay for equal work, collector rate of minimum wages, etc. It was also decided to rope in sanitation workers of municipalities, town panchayats and gram panchayats.

Two bi-partite meetings convened by the officials of the Corporation could not clinch any issue and strike began as decided by the JAC on October 2nd. Striking workers were threatened by the corporation administration, by the contractors and also by husbands of elected women councillors. Their intention was to break the unprecedented unity of workers. But, workers stood firm and continued the strike.

On the first day of the strike itself, thousands of workers gathered in front of the Collector’s office. October 2nd, being the day of Gandhi Jayanti, workers marched to garland the Gandhi statue in the city. To draw attention of the administration and as a form of a symbolic protest, a petition was also given to the statue of Gandhi.

On the second day, i.e., October 3rd, workers gathered before the collectorate en masse for a peaceful protest. But the police swung into action, started arresting all leaders and workers defying Supreme Court directions regarding industrial disputes. The police had to backtrack at some point because of large mobilisation of workers.

Subsequently, negotiations were held before the District Collector. But, workers refused to participate, demanding release of arrested leaders and workers. As the pressure mounted, arrested leaders and workers were released to facilitate negotiation. Even though there was no amicable settlement during the negotiation with the District Collector, a written statement to pacify striking workers was released by the collector’s office.

As a show of solidarity with striking workers, a 7-member AICCTU team from Karnataka, including Comrade Clifton, national secretary AICCTU, and Comrade Nirmala, NEC member, visited Coimbatore and addressed the striking workers. Comrade Clifton elaborated on the experience of 5-day strike by the Karnataka sanitary workers which forced the ruling BJP government to concede their demand for regularisation. He also stressed on the issue of dignity of sanitary workers in the society.

On the 3rd day of strike, workers gathered in thousands and blocked the road successfully, thus ensuring that negotiations took place. During the negotiation convened by the Corporation Commissioner and the Mayor, AICCTU, represented by Bala Subramaniam, state vice-president and Santhanam, state committee member, effectively articulated the demands of workers.

The Corporation also announced Rs. 3,750 as Deepavali bonus on the eve of strike aiming at luring workers to avoid the strike. AICCTU protested the move to announce a bonus much less than mandatory minimum bonus and instead, demanded a bonus of twenty per cent. Hence, the Corporation administration withdrew its announcement in the course of negotiations and assured to call for a fresh negotiation on the subject which was accepted by the JAC.

Despite huge political and ideological differences among various unions of the JAC, the workers displayed exemplary spirit of unity that formed the basis for the success in the first phase of a long struggle of workers for regularisation and minimum wages.

Unlike other unions, AICCTU categorically stated that the government is responsible for the continuance of inhuman contract system and corrupt practices. AICCTU was consistent that the struggle for decent wages and dignity of sanitation workers is to be waged against the government and not only against any individual contractors or so. Unfortunately, the plight of workers continues unchanged under the DMK government which had promised regularisation of contract workers with 10 years of service, but ignored the promise.

AICCTU is determined to continue its struggle until the contract system for sanitation work is put to an end, for regularisation of their services and payment of equal wages for equal work. The historic struggle and the strike by sanitation workers of Coimbatore can very well turn into a state-level movement of sanitation workers and the days are not too far.