Vision Shramev Jayate@2047: A Document of Deceit and Lies 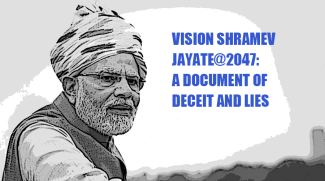 Maitreyi Krishna“If you tell a lie big enough and keep repeating it, people will eventually come to believe it.”

In his speech at the National Labour Conference of Labour Ministers and Labour Secretaries of States/UTs organized by the Government of India at Tirupati on 25–26 August 2022, the Prime Minister Narendra Modi spoke about how the government had taken initiative to abolish the laws from the period of slavery and how the new “simplified” labour code would ensure “the empowerment of workers through minimum wages, job security, social security, and health security”. The lies and deceit of the present regime continues as it attempts to deprive workers of their basic hard-won rights and push the working class into a condition of slavery.

Building on these lies, a document titled “Vision Shramev Jayate@2047” makes tall claims about the impact of government policy level reforms on the workforce. However, a reading of the document would go to show that the claims made by it are in direct contrast to what the impact of the reforms would actually be, i.e. the increased exploitation of workers and the enrichment of the corporate classes.

The document claims to further gender equality through measures including “flexible workplaces”, improving workplace safety, provision for employment of women in all establishments and increase in maternity benefits. However, a reading of the changes made would show that they in fact make women workers more vulnerable and allow for discriminatory conditions of work.

“Flexible workplace” is just another name for unbridled power of the employer to exercise complete control over the terms of employment and to terminate workers at will. As Ambedkar said the failure of the State to intervene in economic and private affairs would result in the dictatorship of the private employer. While questioning the claim that such non-intervention would result in liberty, Ambedkar questioned to whom and for whom is this liberty. It is, as he says, “for capitalists to increase hours of work and reduce rate of wages”. This is precisely what the present regime is attempting. Flexible workplaces means flexibility of the employers to act according to their whims and fancies - flexibility to deny workers their rights.

Further, Modi in his speech at the Conference emphasized on the work-from-home ecosystem as opportunities for women's labour force participation. This idea of work-from-home for women can be seen as a reinforcement of the Manuvadi idea of confining women at home.

Flexible workplaces, which compel workers to work under insecure working conditions and allow for easy termination, will allow various forms of violence, including sexual violence and discrimination, to go unchecked. Previous experience with “flexible workplaces” of contractualization and informalization has shown that it is the historically oppressed sections of society – Dalits, women and other exploited communities, that primarily form this workforce. Thus, “flexible workplaces” would in fact result in denying already vulnerable and exploited workers, especially women workers, their most basic rights.

Moreover, the new Codes take away even minimum protections offered by existing labour laws. For instance, at present, a number of sectoral statutes mandate the provision of crèche and statutorily, the manner of maintenance of such crèches are laid down. However, the Occupational Safety, Health and Working Conditions Code, 2020 (hereinafter referred to as OSH Code), has done away with the sector-wise mandate of crèches and factories with 30 women workers but less than 50 workers would now be excluded from the coverage. Further, the base criteria for such crèches, including ventilation and sanitation, are no longer statutorily mandated.

Article 39(d) of Constitution envisages that the State shall direct its policy towards ensuring equal pay for equal work for both men and women. However, the new Code legalizes discrimination by allowing for unequal wages and discriminatory working conditions. The Equal Remuneration Act, 1976, mandates for non-discrimination in payment of remuneration and conditions of service. The new Code on Wages maintains the façade of it but makes substantial changes that hit at the root of the premise of equality itself. While the 1976 statute envisaged that all remuneration be equal between men and women for same or similar work, the new Wage Code excludes any bonus, value of house-accommodation, special allowances, gratuity, etc. from the definition of wages, thus allowing the employer to deny women workers the same.

This claim is based on Section 43 of the OSH Code that removes the prohibition against employment of women in night shifts and permits employment of women in night shift with their consent. However, by removing this prohibition, women will be forced to work in dangerous and unsafe conditions. Also, what is crucially important to be noted here is that while dealing with highly unequal power structures, consent cannot be assumed to be of free will and volition. Consent would be nothing more than an unfree choice, founded on fear and coercion.

The said prohibition was previously provided for under the Factories Act, the Plantations Labour Act, 1951, the Mines Act, 1952, the Beedi and Cigar Workers (Conditions of Employment) Act, 1966, and the Contract Labour (Regulation and Abolition) Central Rules, 1971. Women workers under these are highly exploited, and with no real choice whatsoever.

Thus, the deletion of prohibition against employment in night shifts is not so much about choice as that of extension of exploitative practices against women workers.

Further, the OSH Code goes a step further in exploitation of women workers by permanently rendering a large section of them as contract workers. While the OSH Code prohibits employment of contract labour in core activities of any establishment, it excludes from the definition of core activities various works, including housekeeping and laundry services. Housekeeping, a euphemism for sanitation work, is a caste-ordained occupation primarily done by Dalit women, and by virtue of such exclusion are compelled to work indefinitely in insecure working conditions as contract workers.

Thus, the OSH Code does not make true provision for employment of women. Intead it compels women to work under extremely hazardous, exploitative and insecure conditions.

While the period of maternity leave has been increased by an amendment to the law, the Code on Social Security effectively diminshes the maternity benefit by the manner in which it defines wages. “Wages” which ought to have been all-inclusive, now excludes any conveyance allowance, special allowance, house rent allowance and remuneration payable under any award or settlement. Thus, the maternity benefit actually paid would get reduced.

It is claimed that there is provision of universal access to comprehensive and sustainable social security and portability of social security benefits. However, the reality is that the Code on Social Security (CCS) puts workers in a state of insecurity.

Further, the Code allows the government to permit the employer to opt out of EPF compliance if the Central Provident Fund Commissioner is satisfied that there is an agreement between the employer and majority of the employees to this effect. The right to social security being a fundamental right can not be waived and such a clause effectively allows for the same. The inequal power relations between employer and workers would result in workers being compelled to give up their right to social security.

The document claims that several steps are being taken with regard to the gig and platform economy.

The document characterizes the relationship between the platform owner and the workers as “other than one of employment”, thus placing 77 lakh workers outside the purview of the law. In fact, the relationship between the platform and the worker is one that clearly falls within the definition of an employer and employee. The UK Supreme Court in Uber BV vs. Aslam confirmed that Uber drivers are workers and therefore entitled to receive the rights under employment law and more recently, this position was reiterated by the Courts in New Zealand. The document by erroneously characterizing the relationship acts against the workers interest by attempting to place lakhs of workers outside the purview of the law, which, in fact, they should be covered by.

Even the claim made by the document that gig workers and platform workers would have schemes framed for them relating to life, disability, accident, etc. is also a hollow one. In fact, the Social Security Code, as detailed above, makes absolutely no social security rights to accrue to them.

The Vision 2047 document claims that the key focus areas would include generation of full, productive and freely chosen employment, decent work for all and transition from informal to formal economy.

The ILO understands decent work as work that is (a) productive and delivers a fair income, (b) provides security in the workplace and social protection for all, (c) better prospects for personal development and social integration, (d) freedom for people to express their concerns, organize and participate in the decisions that affect their lives and (e) equality of opportunity and treatment for all women and men.

An understanding of the Labour Code would show that the codes in fact crush the Constitutional guarantee of decent work.

The introduction of a national floor wage and the manner in which minimum wage is calculated would result in wages being fixed less than the actual minimum wages, leave aside a fair wage. The increase in the threshold of various laws, the power of the government to exempt establishments and the definitional changes to exclude establishments would result in workers who were previously protected under legislation, being excluded from it. Thus, the codes result in pushing lakhs of workers outside the law and the informalization of the currently formal workforce. The Industrial Relations Code directly attack the rights of workers to organize and strike attacking the basic rights of workers to express their concerns and organize. As seen above, the new codes allow for discriminatory practices against women workers.

The claim of the document that the new codes would provide for decent work is nothing but a blatant lie. On the contrary, the codes push workers into conditions of slavery.

It is necessary to go beyond this web of deceit and recognize the grave danger that lies before the working class.