AICCTU Against the Mafia Raj and the Nexus of Bureaucrats, Contractors and the Mafia in Railways 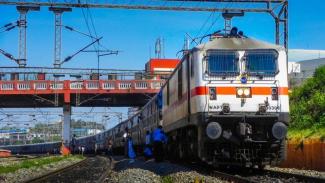 In South Eastern Railway the contract workers are engaged in almost all departments to carry out the outsourced jobs in core and non- core activities like cleaning, sanitisation, sweeping of stations and rakes, electrical, engineering, mechanical maintenance etc. In connivance with the Divisional authorities, the contractor habitually denies statutory benefits like ESI, EPF, minimum wages, bonus, compelling them to work beyond 8 hours to12 hours, etc. Any protest by individual workers for such denial and deprivations end up in instant retrenchment and threat by goons engaged by contractors. Virtually, the poor workers, before being unionised, used to surrender before the Mafia Raj being run by the contractors with the tacit support of the railway divisional administration. AICCTU first came forward to  conduct a detailed study on the plight of contract workers in Kharagpur Division of S. E. Railway  and concentrated trade union work among such deprived workers who were leading a life of almost like a bonded labourer in Santragachi – Andul - Padmapukur - Shalimar complex in the Kharagpur Division of S.E. Railway.

Demands of the union were conceded immediately when the union started operating, creating a great enthusiasm among workers.

The situation abruptly changed when the BJP Government came to power in 2014.The unholy nexus between the bureaucrats, contractors and the mafia attempted to suppress the raging movement of the contract workers for minimum wages, social security, bonus, etc. In 2020-21, the Mafia Raj was established in Santragachi - Shalimar Complex by a section of influential contractors which led to threatening of workers with guns and then, followed by threat calls its leaders. SERTSU/AICCTU started organising the workers against mafia raj and gave a strike call on 21st July, 2021, defying the mafia, contractors and the administration, on demands of Minimum Wage and ESIC Card for the Line Box Carriers of Guards and Drivers. When Empty rake of Dhauli Express bound for Bhubaneswar could not leave as boxes of Guards and Drivers were not loaded, the local authority came to a negotiated settlement of hiking the wage by RS.1000 along with providing ESIC Card and of promising restoration of law and order.

In the background of massive outsourcing of perennial jobs in Santragachi area, South Eastern Railway, “Thika Shramik Union” was formed by AICCTU in 2010 to spearhead the movement of AC Coach attendants for minimum wages  and for reinstatement of 7 retrenched contract workers for going on a lightning strike that resulted in the halting of Mumbai Duronto Express.

Similarly on 31st July the contract Workers  engaged in ANDUL Running Room as cooks, helpers, sanitation workers, etc. led by AICCTU/SERTSU gheraoed a particular contractor for immediate payment of wage dues and bonus for 2019 and 2020. This exposed the fraud, perpetrated by the said contractor, of showing inflated amount of wages through individual bank account while actually paying much less to each worker. The Branch Secretary led the movement forced the contractor to pay wage dues and bonus for they years 2019 and 2020 on the spot. (In the same branch, since ESI Card was not issued, one worker suffering from brain-tumour could not be admitted to ESI Hospital for life saving treatment).

On the next day 14 workers were terminated from services as a sinister move to supress the struggle for justice. The union immediately intervened and organised mass demonstration on 10th August at Santragachi and Andul.

South Eastern Railway Mazdoor Union, another affiliate of AICCTU came forward in solidarity and organised a militant demonstration followed by dharna at Kharagpur in front of the office of the Divisional Railway Manager (DRM) of Kharagpur on 31 August. The aggrieved workers were so agitated that they forced themselves into the prohibited area of DRM premises, defying RPF on duty at the gate. Dharna continued from 11AM  to 5 PM. Leaders from AITUC, LRSA  supported the movement by joining the rally and addressing the gathering. ADRM, in the absence of DRM, held a long negotiation for more than an hour and some of the demands of the Mazdoor union were conceded. He also assured that 14 retrenched contract workers would be reinstated after due consultation with the concerned contractor.

Contract workers under the leadership of AICCTU/SERTSU are preparing themselves for a bigger struggle to assert their rights as well as to end the Mafia Raj in the division.