The Battle Against Privatisation Should Become a Social and Political Agenda 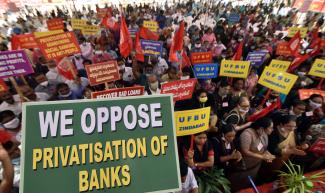 The All India Bank Employees’ Association was formed just a year before India’s independence. The All India Trade Union Congress had already been formed in 1920. As India fought for independence from British rule, various segments of India’s working class combined the struggles for their own rights with the nation’s quest for freedom and the battle for nationalisation of India’s strategic resources and future economic assets. With the arrival of national independence in 1947, the stage was set for a steady nationalisation of India’s key economic sectors. Life insurance was nationalised in 1956 followed by banks in 1969 and coal mines in 1973. This was the direction set by India’s freedom movement. Today this direction is being reversed at breakneck speed. The loud invocation of nationalism in politics serves only as a war cry for aggressive de-nationalisation or privatisation of all key sectors of the Indian economy.

Banks play a key role in capital formation. They attract savings of common people and turn them into loan capital. Bank nationalisation had given banks stability and security and the banking industry grew enormously following nationalisation with growing proliferation of branches of nationalised banks and the allied rural and cooperative banks. Nationalised banks could have played a bigger role in promoting balanced economic development if the loans were directed more to priority sectors to support agriculture and small and medium industries. This has however never really happened; private big business has grabbed the lion’s share of bank loans. With the rise of crony capitalism, the loans grabbed by big companies have increasingly turned into bad loans, euphemistically termed non-performing assets or NPAs and successive governments have gone on writing off much of these loans. This has been the root cause of the banking crisis in recent years and the Modi government   has now been using this crisis as an excuse to push for systematic de-nationalisation or privatisation of banks.

In other words, the crisis that resulted from the derailment and distortion of banking policy by crony capitalism is now being used to subvert the entire banking sector and subject it to more direct corporate control. Business houses that have been sitting atop mountains of accumulated unpaid loans, with some prominent members occasionally even fleeing the country with the complicity of the government, are now being handed the reins of the banking industry. From grabbing loans, they will now graduate to controlling the loan factories themselves. This is the real implication of the various measures the government is adopting in the name of resolution of the banking crisis. From merger and consolidation of banks and writing off or buying out of bad loans to expanding opportunities for private banks and outright privatisation of public sector banks – all these measures of banking reform are aimed at what we can broadly call the privatisation of the banking industry. The insurance sector too is being privatised alongside banking.

This privatisation of the financial sector is part and parcel of the Modi government’s larger privatisation offensive. From health, education and transport to infrastructural construction and maintenance, the government is rapidly abdicating its responsibility and handing over the economy to private players. Since neoliberal policies have run into a major crisis and privatisation stands increasingly exposed and discredited as a bad idea, successive governments have been adopting roundabout ways like public-private partnership or PPP mode, disinvestment, outsourcing and, as the Modi government’s latest policy goes, asset monetisation. In all these measures of tacit privatisation, the government misleads the public by maintaining a fiction of continuing state ownership while handing over effective control and enduring revenues to private hands.

If we take a close look at the recently launched National Monetisation Pipeline, the scheme contemplates leasing out of public or national assets for private profit for a minimum average period of forty years, the time frame for two generations of Indians to reach voting age. The assets listed for leasing out cover thirteen core areas like road and rail transport, ports and airports as well as networks of power transmission, telecommunication and internet connectivity. Private corporations getting exclusive rights to exploit such wide-ranging key resources is nothing short of a massive asset stripping programme. The fund that is projected to accrue to the government exchequer over the next four years through this so-called asset monetisation is only a tenth of what India’s top two corporate houses would accumulate during the same period even at their current rate of accumulation, without taking into account the additional income that would accrue to them from the newly grabbed resources. While the government exchequer will suffer, electoral bonds that anonymously collect corporate cash for the BJP will swell as the Modi government gifts away precious public assets to its closest corporate friends.

Privatisation will adversely affect the job market and erode the rights of workers. Secure jobs with rights to unionisation and collective bargaining will increasingly disappear as resources change hands. Shrinking of government jobs will also mean a growing reversal of even the limited social mobility and justice secured by people belonging to oppressed castes through reservation. Beyond this crucial shift, there will also be a bigger blow to the informal sector. Millions of small traders, street vendors, and daily wage earners will experience a major erosion of livelihood as they get evicted from the vicinity of the newly corporate held assets. Privatisation will thus aggravate the misery of the masses while swelling corporate wealth. The battle against privatisation will have to address this larger socio-economic dimension. It is certainly possible and absolutely necessary if we want to resist and reverse the privatisation offensive of the Modi government.

Privatisation is all about expansion and consolidation of corporate power. The struggle against privatisation is therefore a battle against corporate power and in this battle, bank employees and the wider sections of the working class have a firm ally in the ongoing farmers’ movement. For nearly a year now, India’s farmers have been waging historic resistance against the Adani-Ambani Company Raj with exemplary unity and determination. It has exposed the anti-farmer pro-corporate character of the Modi regime with absolute clarity. Narendra Modi keeps saying that his government has no business to be in business. The country now realises the business being transacted by the Modi government. It is busy selling national assets to buy enduring corporate support, all the while mouthing the slogan of Atmanirbhar Bharat or self-reliant India. More and more people are now seeing through this game and rising in protest against this scandalous sale of assets built over decades with public money. The bank employees fighting against privatisation will have to join hands with this larger public campaign to stop this sale of national assets, this auctioning of India to foreign and Indian corporate plunderers.

The struggle to resist privatisation is not a defensive struggle to save the existing state of affairs. It is to bring about a shift in the policies and priorities of the banking sector away from serving the corporates to serving the people. It is to change the lending pattern where indebted farmers are driven to suicides and microfinance schemes turn into an extortionist racket targeting women seeking livelihoods, while crony capitalists run away with subsidised loans and mega defaulters are rewarded with periodic bailout packages. The struggle against bank privatisation is an integral part of the wider struggle against corporate power and the fascist state being propped up by this unbridled corporate power. We wish the AIBEA and the united struggle of bank employees victory in this struggle and pledge our fullest support to this end.