Engineered to Last! The Best Never Rest? - Ford to Down its Shutters in India! 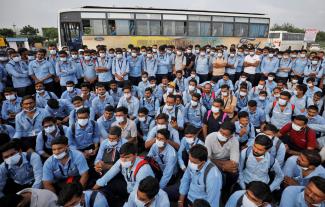 Chennai city is known as the hub of automobile industry with various multinational car manufacturing companies, like Hyundai, BMW, Reynault, Fiat and Ford, having their plants under its hood. These units have a small segment of permanent workers and primarily employ large sections of workers as trainees, company apprentices, act apprentices and contract labour in the core manufacturing process defying labour laws. In a bid to attract investments, many state governments competed to offer land, water, electricity and tax concessions. There is a big chunk of workers - multiple times of the plant workers - who work in the ancillary units supplying components. They hardly enjoy any social security. As agriculture increasingly became non-remunerative, the rural youths who migrated to cities in search of livelihood landed up in these jobs and were forced to survive in the precarious working conditions. In a major automobile belt like Maraimalai Nagar - Oragadam - Irungattukottai area of Greater Chennai, it is common to find about ten workers staying in a single room. Workers live in subhuman conditions in these localities around this belt.

The recent announcement of Ford Company’s decision to close down its operations in India is going to affect tens of thousands of workers. An estimated 30,000 workers, including 2600 direct employees and 3000 indirect employees of Chennai and Gujarat's Sanand plants of Ford will be badly affected. Workers employed in ancillaries, showrooms, service stations and logistics sector will be hit drastically.

In fact, prior to the announcement, the Chennai plant was shut down for a week on the pretext of shortage of raw materials.  After this, when workers resumed the work, the announcement of closure followed passing severe shock to them. The average age of the workers is between 30 and 40 years. They have already put in 10 to 18 years of service and availed home loans and other loans to meet their requirements.  The children of most of the workers are studying in primary or middle schools. In such a context, Ford's decision to close down its operations poses a big question mark on their life.

The Ford management claim is that it is running into a loss of $2 billion as operational cost but, on the contrary, workers are working too hard and the workload is too high beyond the level of human possibilities. They are not even allowed to go to urinals during working hours. If the management claims that the cost of production has increased, how cannot it be reversed while the company keep introducing its new methods of production, modernisation, etc. While the company’s manufacturing units in other countries of high wage islands can make profits why not in a country like India where wage levels are much lower than the international standards? Moreover, Ford is also known for its profitability through increase in productivity. Workers and the union are willing to cooperate and are even ready to forego certain benefits but the management is adamant in its decision. However, the management says that there is an actual decline in sales and very low return on investments. On the contrary, several other auto majors are making huge profits including Hyundai in Chennai. In such a case, why only Ford make losses? When the Ford’s international operations can make profits why only Indian operations should make losses? The Ford company should come up with a white paper on this issue and the Tamil Nadu government should demand for it. These MNCs reap profits exploiting the natural resources, manpower and utilising tax holidays but do not take any social responsibility on their sleeves. While the investors are demanding counter guarantee for their investments, even the bare minimum protection given in the labour laws for workers are being stripped off. The governments, but for competing with each other to offer multiple concessions to MNCs, do not demand a counter guarantee clause for the protection of employment and employees at the time of MOU itself. Getting a guarantee for employment and employees should be one of the important clauses of any agreement to launch operations of MNCs in India and Tamil Nadu. Rather, we are listening to reports that the Ford is shifting its focus on electric vehicles and is diverting funds towards the venture by closing down Indian operations. It is not the losses but the search for super profits through diversification and diversion, etc., are the reasons for closure and this should not be allowed. Fleeing capital without any social responsibility and at the whims and fancies of the MNCs in search of super profits shall be restricted and the employment of the workforce shall be protected.

The dealers have invested 5-6 crores of rupees in showrooms. They experienced heavy losses due to pandemic and were waiting for the festive season to pick up sales by which time Ford has announced its exit. In the meantime, the Ford management has announced to continue with the service obligations of sold cars and allow showroom dealers to sell its spare parts.

AICCTU and all the leftist trade unions have opposed the Ford company's move for closure and appealed to Tamil Nadu state government to veto the permission when Ford forwards its application for closure, as per Industrial Disputes Act.

In Gujarat, when Ford announced the closure of Sanand unit, MLA Jignesh Mevani stood in solidarity with workers in opposing the move. In Tamil Nadu, when the Ford employees submitted a petition to the Minister of Industries, Mr Thangam Thennarasu, to protect their livelihoods, he had a meeting with the Chief Minister Mr Stalin. The Chief Minister also had a meeting with the Ford officials but the details are not yet divulged to the public. As the discontent among work force is simmering, a police posse is stationed at the plant gate now.

In 2014, in a similar instance, MNC Nokia, which had benefitted for years from the land and all resources offered at throw away prices, operated with 8000 direct workers, closed its operations in Chennai. Permanent workers were given a meagre compensation and all others were left in lurch. It was found later that it indulged in huge tax evasion. Now, the Ford is taking its turn but the working class and the progressive intelligentsia should not allow for the repeat of the injustice and protect the livelihoods of both direct and indirect workers, ancillary manufacturers, dealers and all other stakeholders.

The working class movement has to pick up threads from the on-going farmers' protest that is relentlessly challenging the Modi government over farm laws. Time is ripe for a solid united movement of workers and peasants which can give a body blow to the anti-people corporate-friendly Modi government.