The Hidden Truths of ‘Record’ Growth in GDP 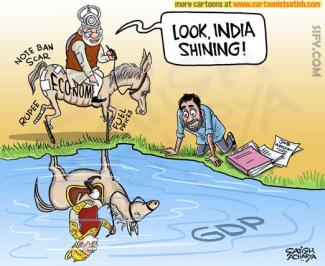 The National Statistical Office (NSO), working under the Ministry of Statistics and Programme Implementation (MOSPI), announced the 2021-22 first quarter (Q1 - April-June quarter) results of Indian Economy. In the entire history of the release of quarterly results of the Indian Economy, this is the first time that Q1 recorded the highest growth in Year-on-Year (YOY) gross domestic product (GDP) at 20.1%. The GDP is the gross value of goods and services produced within the geographical boundary of the country. This new record means that the GDP produced during this three month period was 20.1% higher than that produced during the same period a year ago (April 1, 2020-June 30, 2020). Such a huge jump in GDP had never happened in India.

Obviously, the ruling dispensation went gung ho about this achievement of ‘Modiji’. This ‘unprecedented’ growth led to unprecedented celebration in social media, trumpeted by the IT cell of the ruling party. The BJP IT cell and its media never revealed the fact that Q1 of 2020-21 recorded the lowest GDP growth rate – a whopping negative 24.4 percent (-24.4%), in the lifetime of post-independence Indian economy. This was unprecedented too.

It is true that the path the Indian society, economy and polity have been traversing during the Modi regime is all round ‘unprecedented’. Otherwise, how could a government and its sychophants swagger the hardship of poor people as a success story of the government? The gung ho over the record growth of Indian economy is one more in the gamut of fake propaganda of Modi-led BJP. The ‘huge’ growth was a result of the low base for calculating growth rate. Moreover, it can be observed that Indian Economy has not even achieved the GDP of Q1 2019-20 as is discussed later. Therefore, Q1 GDP of India in the current financial year fell short of Q1 GDP of two years ago.

It is to be noted that two years ago the real GDP of Q1 was 9.2% more than the real GDP of Q1 of the current fiscal, but due to lower base effect this huge decline is projected as a huge gain of 20.1%. Before pandemic lockdown, in 2019-20, the economy was struggling to float, which was drowned 24.4 metres by the absolutely undemocratic and ineffective anti-poor, anti-farmer, anti- labour lockdown of the Modi government. It is from here that the huge majority of the struggling masses are trying to pull the economy out and has brought it up quite a bit while still down by 9.2 metres, However, the Modi brigade tried to fool the people by spreading the lie of unprecedented growth.