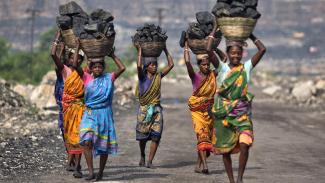 “It is true that where the State refrains from intervention what remains is liberty. But this does not dispel of the matter. One more question remains to be answered. To whom and for whom is this liberty? Obviously, this liberty is liberty to the landlords to increase rents, for capitalists to increase hours of work and reduce rate of wages… In other words what is called liberty from the control of the State is another name for the dictatorship of the private employer.”

The first law minister of Independent India Dr. B.R. Ambedkar could clearly see what would happen if laws of a nation deny to protect rights of the working class or the oppressed. Quite often than not, this denial comes with glorious justification of freedom of the ‘Capitalist’, the Corporates in today’s functional terms, to do business.

The latest Labour Code Acts passed under the present regime in 2020 in its content is a step towards setting the corporates free for denying hard earned rights of workers. Several articles, carried in this journal earlier, have analysed this.

In this piece, we will focus on the impact of the new labour codes on women workers.

In a patriarchal structure, women workers face double exploitation, as workers on one hand, and as women on the other. Through decades of struggle, certain demands of working women have been enacted in statute. The new Labour Codes that are being sought to be implemented will strike at the soul of these rights, and dilute their essence.

Assault on Right to Equal Remuneration

Article 39(d) of Constitution envisages that the State shall direct its policy towards ensuring equal pay for equal work for both men and women. This provision was given teeth in the Equal Remuneration Act, 1976, which was avowedly enacted “to provide for the payment of equal remuneration to men and women workers and for the prevention of discrimination, on the ground of sex, against women in the matter of employment” This law provides for non-discrimination in payment of remuneration and conditions of service.

The new Code on Wages deliberately obliterates the spirit and substance of the mandate of equal pay for equal work, while maintaining its façade.

Firstly, what is the “pay” that is mandated to be equal? The 1976 statute envisaged that all remuneration, [whether payable in cash or in kind] be equal between men and women, for same or similar work. However, the new Wage Code mandates payment of ‘equal wages’, which is specifically defined  in section 2(y) with various exclusions. Thus, opening up space for gender discrimination.

The catch, for our purposes, lies in the second proviso to section 2(y), which state that “Provided further that for the purpose of equal wages to all genders and for the purpose of payment of wages, the emoluments specified in clauses (d), (f), (g) anf (h) shall be taken for computation of wage. This convoluted wording means that clauses (a), (b), (c), (e), (i), (j), (k) would not be included in the new mandate for equal wage for equal work. Thus, discrimination on ground of gender is statutorily permissible in respect of the following heads:

“(a) any bonus payable under any law for the time being in force, which does not form part of the remuneration payable under the terms of employment;

(b) the value of any house-accommodation, or of the supply of light, water, medical attendance or other amenity or of any service excluded from the computation of wages by a general or special order of the appropriate Government;

(c) any contribution paid by the employer to any pension or provident fund, and the interest which may have accrued thereon;

(j) any gratuity payable on the termination of employment;

(k) any retrenchment compensation or other retirement benefit payable to the employee or any ex-gratia payment made to him on the termination of employment.

Importantly, the second proviso must be read with the first proviso to section 2(y), which states that any if the first 9 exclusions exceed half or any other prescribed percentage of wages, excess payment under such categories beyond such percentage would be considered wages. This means, that the upto 50% of the income of workers may not be considered “wages”. It is unclear whether, for the purposes of equal remuneration, the same 50% limit on disparity in wages would apply or whether there is no such limit.

Secondly, the new Code on Wages in section 3 mentions the term ‘employees’, which excludes apprentices. Hence, women apprentices will have no right to equal remuneration.

Thirdly, there is a shift in the definition of ‘same work or work of similar nature’. This now includes a condition of same experience, in addition to the previous criteria of skill, effort and responsibility. Importantly, in the context of equal pay for equal work for casual workers, the Supreme Court had held that “Whether appointments are for temporary periods and the Schemes are temporary in nature is irrelevant once it is shown that the nature of the duties and functions discharged and the work done is similar and the doctrine of 'Equal pay for equal work' is attracted.”  Introduction of the ‘experience’ criteria may be utilized to deprive workers engaged in same work from equal remuneration.

The calculation of Maternity Benefit is heavily impacted by the definition of wages in the new Social Security Code. Thus, while on maternity leave, a woman would still be entitled to maternity benefits, but the “wages” though would newly exclude the following, effectively reducing the wages significantly compared to the existing acts:

(d) any conveyance allowance or the value of any travelling concession;

(g) remuneration payable under any award or settlement between the parties or order of a court or Tribunal;

Another dangerous change is the deletion of the prohibition against employment of women in night shifts in Section 43 of the Occupational Safety, Health and Working Conditions Code (OSH Code henceforth). This section permits employment of women in night shift (between 7 p.m. and 6 a.m.) with their consent. The crux of the matter is that, when dealing with highly unequal power structures, consent cannot be assumed to be free. Even in the context of wages, the Hon’ble Supreme Court has repeatedly held that due to various forces, including economic coercion, a consensual agreement to work for less than minimum wages could not be understood as free consent. In  PUDR v Union of India AIR1982SC1473, the Supreme Court held similar view.

“Moreover, in a country like India where there is so much poverty and unemployment and there is no equality of bargaining power, a contract of service may appear on its face voluntary but it may, in reality, be involuntary, because while entering into the contract, the employee, by reason of his economically helpless condition, may have been faced with Hobson's choice, either to starve or to submit to the exploitative terms dictated by the powerful employer. It would be a travesty of justice to hold the employee in such a case to the terms of the contract and to compel him to serve the employer even though he may not wish to do so. That would aggravate the inequality and injustice from which the employee even otherwise suffers on account of his economically disadvantaged position and lend the authority of law to the exploitation of the poor helpless employee by the economically powerful employer.”

It may be noted that the Factories Act provides in section 66 that 1) women cannot be required to or allowed to work in a factory for more than nine hours in any day, 2) no woman shall be required or allowed to work in any factory between 7 P.M and 6 A.M, and even relaxation by State government could not permit employment between 10 P.M. and 5 A.M. The Plantations Labour Act, 1951, the  Mines Act, 1952, the Beedi and Cigar Workers (Conditions of Employment) Act, 1966, and the Contract Labour (Regulation and Abolition) Central Rules, 1971 have similar provisions

Curtailment of Provision of Crèche

A number of sectoral statutes currently mandate provision of crèche. Statutorily, the manner of maintenance of such crèches are laid down, including that they must provide adequate accommodation, be adequately lighted and ventilated, be maintained in a clean and sanitary condition and be under the charge of a woman trained in the care of children and infants.

Section 67 of the new Social Security Code maintains the provision of creche, but the sector-wise mandate of crèche has been done away with. This has three consequences:

1. Now, only ‘establishments’ would be covered, whereas the BOCW Act covered all ‘places’ where more than 50 workers were ordinarily employed. In the context of construction, where there might not be a single large establishment, workers would not be entitled to crèche.

2. Those factories with 30 women workers but less than 50 workers would now be excluded from coverage.

3. The base criteria for such crèches, including ventilation and sanitation, are no longer statutorily mandated.

The Code fails to ensure adequate representation to women in various statutory boards and instead merely provides for their token representation. For example, the Building and Other Construction Workers’ Welfare Board that may have upto 16 persons mandates that ‘at least one member of the Board shall be a woman’. Similar is the case with the Building Workers’ Welfare Boards under the Social Security Code. Despite a large percentage of workers in the construction industry being women, adequate representation has been ignored in the new code.

Women workers have faced the brunt of the rampant contractualization of employment across sectors. Dalit women especially, are employed for decades on end through sham contractors to clean toilets and other areas, and are euphemistically called “housekeeping staff”. Now, the OSH Code prohibits employment of contract labour in core activities of any establishment, but excludes, from the definition of core activities  “housekeeping and laundry services, and other like activities, where these are in nature of support services of an establishment”. Moreover, sanitation and house keeping are very much part of core activities in some industries like hospital, etc., that necessaitates cleanliness a precondition for cure and delivery of the industry. Effectively, the burgeoning sham contractualisation of the most vulnerable in terms of caste, class and gender is granted sanction in law. It must be remembered that the Supreme Court likened contract labour to an improved form of bonded labour in Sankar Mukherjee and Ors. v. Union of India (UOI) and Ors., [AIR 1990 SC 532.

In conclusion, it is important to keep in mind that the manner of incorporating such anti-women provisions makes it clear that such amendments are wholly deliberate. This was not an accident while seeking to streamline the provisions, but a very intentional and underhanded attack on Article 14 of the Constitution. We must mobilise against these anti-women, anti-workers Codes not only in terms of the unconstitutionality of such provisions, but also the mala fides of the government towards women workers.